Spain’s Rivals in the New World 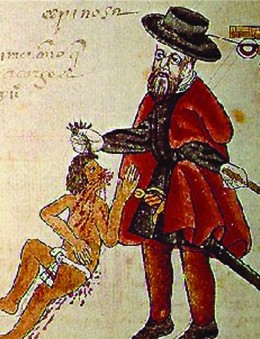 Figure 1. In this startling image from the Kingsborough Codex (a book written and drawn by Native Mesoamericans), a well-dressed Spaniard is shown pulling the hair of a bleeding, severely injured Native man. The drawing was part of a complaint about Spanish abuses of their encomiendas.

While Spain plundered the New World, unrest plagued Europe. The Reformation threw England and France, the two European powers capable of contesting Spain, into turmoil. Long and expensive conflicts drained time, resources, and lives. Millions died from religious violence in France alone. As the violence diminished in Europe, however, religious and political rivalries continued in the New World.

The Spanish exploitation of New Spain’s riches (in present-day Mexico) inspired European monarchs to invest in exploration and conquest. Reports of Spanish atrocities spread throughout Europe and provided a humanitarian justification for European colonization. An English reprint of the writings of Bartolomé de las Casas bore the sensational title: “Popery Truly Display’d in its Bloody Colours: Or, a Faithful Narrative of the Horrid and Unexampled Massacres, Butcheries, and all manners of Cruelties that Hell and Malice could invent, committed by the Popish Spanish.”

The system of encomiendas was accompanied by a great deal of violence. One Spaniard, Bartolomé de Las Casas, denounced the brutality of Spanish rule. A Dominican friar, Las Casas had been one of the earliest Spanish settlers in the Spanish West Indies. In his early life in the Americas, he owned enslaved Indians and was the recipient of an encomienda. However, after witnessing the savagery with which encomenderos (recipients of encomiendas) treated the Native people, he reversed his views. In 1515, Las Casas released his enslaved Indians, gave up his encomienda, and began to advocate for humane treatment of Native peoples. He lobbied for new legislation, eventually known as the New Laws, which would eliminate Indian slavery and the encomienda system in 1542.

Las Casas’s writing about the Spaniards’ horrific treatment of Indians helped inspire the so-called Black Legend, the idea that the Spanish were bloodthirsty conquerors with no regard for human life. Perhaps not surprisingly, those who held this view of the Spanish were Spain’s imperial rivals. English writers and others seized on the idea of Spain’s ruthlessness to support their own colonization projects. By demonizing the Spanish, they justified their own efforts as more humane. All European colonizers, however, shared a disregard for Indians.

Bartolomé de Las Casas’s A Short Account of the Destruction of the Indies, written in 1542 and published ten years later, detailed for Prince Philip II of Spain how Spanish colonists had been mistreating Indians.

Into and among these gentle sheep, endowed by their Maker and Creator with all the qualities aforesaid, did creep the Spaniards, who no sooner had knowledge of these people than they became like fierce wolves and tigers and lions who have gone many days without food or nourishment. And no other thing have they done for forty years until this day, and still today see fit to do, but dismember, slay, perturb, afflict, torment, and destroy the Indians by all manner of cruelty—new and divers and most singular manners such as never before seen or read or heard of—some few of which shall be recounted below, and they do this to such a degree that on the Island of Hispaniola, of the above three millions souls that we once saw, today there be no more than two hundred of those native people remaining. . . .

Two principal and general customs have been employed by those, calling themselves Christians, who have passed this way, in extirpating and striking from the face of the earth those suffering nations. The first being unjust, cruel, bloody, and tyrannical warfare. The other—after having slain all those who might yearn toward or suspire after or think of freedom, or consider escaping from the torments that they are made to suffer, by which I mean all the native-born lords and adult males, for it is the Spaniards’ custom in their wars to allow only young boys and females to live—being to oppress them with the hardest, harshest, and most heinous bondage to which men or beasts might ever be bound into.

How might these writings have been used to promote the “Black Legend” against Spain as well as subsequent English exploration and colonization?

An English writer explained that the Indians “were simple and plain men, and lived without great labour,” but in their lust for gold the Spaniards “forced the people (that were not used to labour) to stand all the daie in the hot sun gathering gold in the sand of the rivers. By this means a great nombre of them (not used to such pains) died, and a great number of them (seeing themselves brought from so quiet a life to such misery and slavery) of desperation killed themselves. And many would not marry, because they would not have their children slaves to the Spaniards.”

The Spanish accused their critics of fostering a “Black Legend”, or exaggerated anti-Spanish propaganda about them. The Black Legend drew on religious differences and political rivalries. Spain had successful conquests in France, Italy, Germany, and the Netherlands and left many in those nations yearning to break free from Spanish influence. English writers argued that Spanish barbarities were foiling a tremendous opportunity for the expansion of Christianity across the globe and that a benevolent conquest of the New World by non-Spanish monarchies offered the surest salvation of the New World’s pagan masses. With these religious justifications, and with obvious economic motives, Spain’s rivals arrived in the New World. These rivals included the Portuguese, French, Dutch, and English.

The Portuguese had been leaders in Atlantic navigation well ahead of Columbus’s voyage. But the incredible wealth flowing from New Spain piqued the rivalry between the two Iberian countries, and accelerated Portuguese colonization efforts. This rivalry created a crisis within the Catholic world as Spain and Portugal squared off in a battle for colonial supremacy. Recall that the Pope intervened and divided the New World with the Treaty of Tordesillas in 1494. Land east of the Tordesillas Meridian, an imaginary line dividing South America, would be given to Portugal, whereas land west of the line was reserved for Spanish conquest. In return for the license to conquer, both Portugal and Spain were instructed to treat the Natives with Christian compassion and to bring them under the protection of the Church.

Lucrative colonies in Africa and India initially preoccupied Portugal, but by 1530 the Portuguese turned their attention to the land that would become Brazil, driving out French traders and establishing permanent settlements. Gold and silver mines dotted the interior of the colony, but two industries powered early colonial Brazil: sugar and the slave trade. In fact, over the entire history of the Atlantic slave trade, more Africans were enslaved in Brazil than any other colony in the Atlantic World. Gold mines emerged in greater number throughout the eighteenth century, but still never rivaled the profitability of sugar or slave-trading.

Jesuit missionaries succeeded in bringing Christianity to Brazil, but strong elements of African and Native spirituality mixed with orthodox Catholicism to create a unique religious culture. This culture resulted from the demographics of Brazilian slavery. High mortality rates on sugar plantations required a steady influx of the newly enslaved, thus perpetuating the cultural connection between Brazil and Africa. The reliance on new imports of enslaved individuals increased the likelihood of resistance, however, and escapees managed to create several free settlements, called quilombos. These settlements drew from both enslaved Africans and Indians, and despite frequent attacks, several endured throughout the long history of Brazilian slavery.