During the 1500s, Spain expanded its colonial empire to the Philippines in the Far East and to areas in the Americas that later became the United States. The Spanish dreamed of mountains of gold and silver and imagined converting thousands of eager Indians to Catholicism. In their vision of colonial society, everyone would know his or her place. Patriarchy (the rule of men over family, society, and government) shaped the Spanish colonial world. Women occupied a lower status. In all matters, the Spanish held themselves to be atop the social pyramid, with native peoples and Africans beneath them. Both Africans and native peoples, however, contested Spanish claims to dominance. Everywhere the Spanish settled, they brought devastating diseases, such as smallpox, that led to a horrific loss of life among native peoples. European diseases killed far more native inhabitants than did Spanish swords. 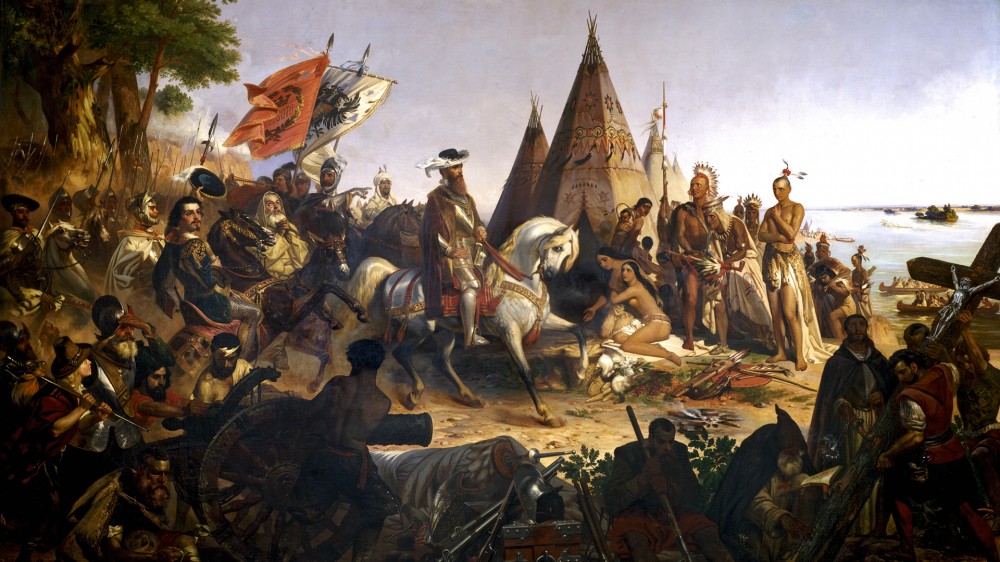 Figure 2. William H. Powell, Discovery of the Mississippi by De Soto, 1853, via Architect of the Capitol.

The world that Native peoples had known before the coming of the Spanish was further upset by Spanish colonial practices. The Spanish imposed the encomienda system in the areas they controlled. Under this system, Spanish conquerors were rewarded for their conquests with tribute and laborers to work (mostly in mining), with the understanding that the Spaniards who received an encomienda would defend the colony and teach the workers the tenets of Christianity. In reality, the encomienda system exploited Native workers in a system akin to slavery. It was eventually replaced by another colonial labor system, the repartimiento, which required Indian towns to supply a pool of labor for Spanish overlords. 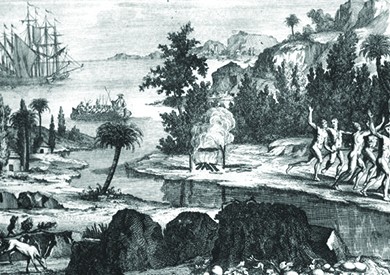 Figure 3. In this drawing by French artist Jacques le Moyne de Morgues, Timucua flee the Spanish settlers, who arrive by ship. Le Moyne lived at Fort Caroline, the French outpost, before the Spanish destroyed the colony in 1562.

Spain gained a foothold in present-day Florida, viewing that area and the lands to the north as a logical extension of their Caribbean empire. In 1513, Juan Ponce de León had claimed the area around today’s St. Augustine for the Spanish crown, naming the land Pascua Florida (Feast of Flowers, or Easter) for the nearest religious holiday. Ponce de León was unable to establish a permanent settlement there, but by 1565, Spain was in need of an outpost to confront the French and English privateers using Florida as a base from which to attack treasure-laden Spanish ships heading from Cuba to Spain. The threat to Spanish interests took a new turn in 1562 when a group of French Protestants (Huguenots) established a small settlement they called Fort Caroline, north of St. Augustine.

With the authorization of King Philip II, Spanish nobleman Pedro Menéndez led an attack on Fort Caroline, killing most of the colonists and destroying the fort. Eliminating Fort Caroline served dual purposes for the Spanish—it helped reduce the danger from French privateers and eradicated the French threat to Spain’s claim to the area. The contest over Florida illustrates how European rivalries spilled over into the Americas, especially religious conflict between Catholics and Protestants. 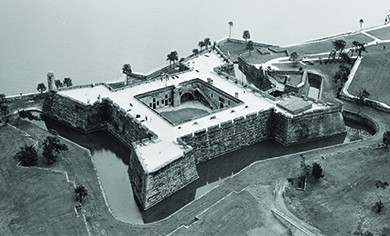 In 1565, the victorious Menéndez founded St. Augustine, now the oldest European settlement in the Americas. In the process, the Spanish displaced the local Timucua Indians from their ancient town of Seloy, which had stood for thousands of years. The Timucua suffered greatly from diseases introduced by the Spanish, shrinking from a population of around 200,000 pre-contact to 50,000 in 1590. By 1700, only 1,000 Timucua remained. As in other areas of Spanish conquest, Catholic priests worked to bring about a spiritual conquest by forcing the surviving Timucua, demoralized and reeling from catastrophic losses of family and community, to convert to Catholicism.

Spanish Florida made an inviting target for Spain’s imperial rivals, especially the English, who wanted to gain access to the Caribbean. In 1586, Spanish settlers in St. Augustine discovered their vulnerability to attack when the English pirate Sir Francis Drake destroyed the town with a fleet of twenty ships and one hundred men. Over the next several decades, the Spanish built more wooden forts, all of which were burned by raiding European rivals. Between 1672 and 1695, the Spanish constructed a stone fort, Castillo de San Marcos, to better defend St. Augustine against challengers.

Browse the National Park Service’s multimedia resources on Castillo de San Marcos to see how the fort and gates have looked throughout history.

In the 1630s, the mission system extended into the Apalachee district in the Florida panhandle. The Apalachee, one of the most powerful tribes in Florida at the time of contact, claimed the territory from the modern Florida-Georgia border to the Gulf of Mexico. Apalachee farmers grew an abundance of corn and other crops, and Indian traders carried surplus products east along the Camino Real, the royal road that connected the western anchor of the mission system with St. Augustine. Spanish settlers drove cattle eastward across the St. Johns River and established ranches as far west as Apalachee. Still, Spain held Florida tenuously.

Further west, the Spanish in Mexico, intent on expanding their empire, looked north to the land of the Pueblo Indians. Under orders from King Philip II, Juan de Oñate explored the American southwest for Spain in the late 1590s. The Spanish hoped that what we know today as New Mexico would yield gold and silver, but the land produced little of value to them. In 1610, Spanish settlers established themselves at Santa Fe—originally named La Villa Real de la Santa Fe de San Francisco de Asís, or “Royal City of the Holy Faith of St. Francis of Assisi”—where many Pueblo villages were located. Santa Fe became the capital of the Kingdom of New Mexico, an outpost of the larger Spanish Viceroyalty of New Spain, which had its headquarters in Mexico City.

As they had in other Spanish colonies, Franciscan missionaries labored to bring about a spiritual conquest by converting the Pueblo to Catholicism. At first, the Pueblo adopted the parts of Catholicism that dovetailed with their own long-standing view of the world. However, Spanish priests insisted that natives discard their old ways entirely and angered the Pueblo by focusing on the young, drawing them away from their parents. This deep insult, combined with an extended period of drought and increased attacks by local Apache and Navajo in the 1670s—troubles that the Pueblo came to believe were linked to the Spanish presence—moved the Pueblo to push the Spanish and their religion from the area. Pueblo leader Popé demanded a return to native ways so the hardships his people faced would end. To him and to thousands of others, it seemed obvious that “when Jesus came, the Corn Mothers went away.” The expulsion of the Spanish would bring a return to prosperity and a pure, native way of life.

Few Spaniards relocated to the southwest due to the distance from Mexico City and the dry and hostile environment. Thus, the Spanish never achieved a commanding presence in the region. By 1680, only about 3,000 colonists called Spanish New Mexico home. There, they traded with and exploited the local Puebloan peoples. The region’s Puebloan population had plummeted from as many as 60,000 in 1600 to about 17,000 in 1680.

The Spanish had been maintaining control partly by suppressing Native American beliefs. Friars aggressively enforced Catholic practice, burning native idols, masks, and other sacred objects and banishing traditional spiritual practices. In 1680 the Pueblo religious leader Popé, who had been arrested and whipped for “sorcery” five years earlier, led various Puebloan groups in rebellion. Several thousand Pueblo warriors razed the Spanish countryside and besieged Santa Fe. They killed 400, including 21 Franciscan priests, and allowed 2,000 other Spaniards and Christian Pueblos to flee. It was perhaps the greatest act of Indian resistance in North American history. 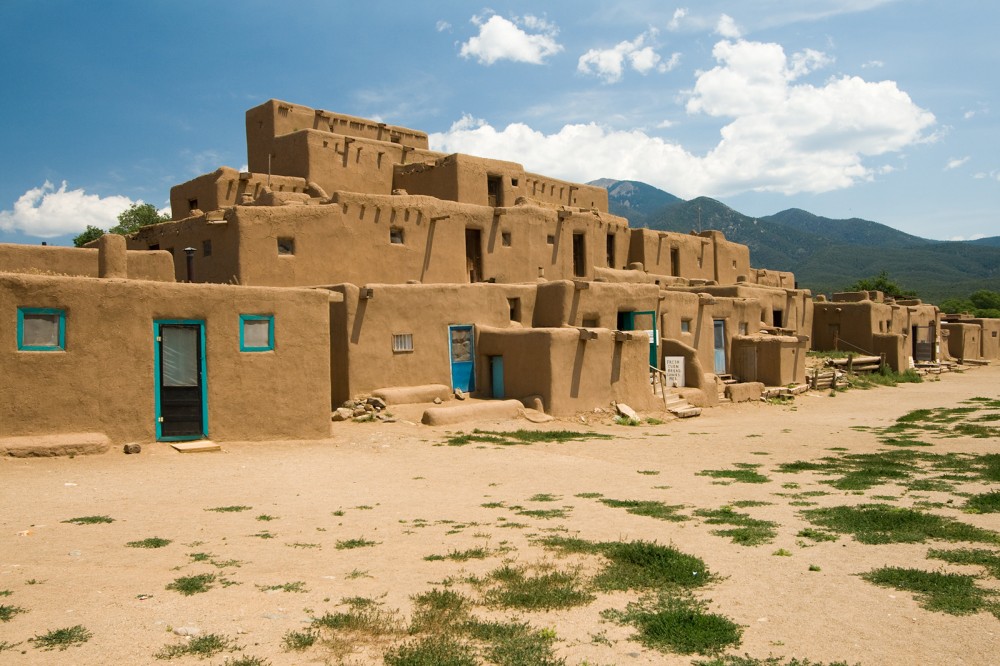 Figure 5. Built sometime between 1000 and 1450 AD, the Taos Pueblo located near modern-day Taos, New Mexico, functioned as a base for the leader Popé during the Pueblo Revolt.

In New Mexico, the Pueblos eradicated all traces of Spanish rule. They destroyed churches and threw themselves into rivers to wash away their Christian baptisms. “The God of the Christians is dead,” they proclaimed, before reassuming traditional spiritual practices. The Spanish were exiled for twelve years. They returned in 1692, weakened, to reconquer New Mexico. Some of the Spanish explained the Pueblo success in 1680 as the work of the Devil. Satan, they believed, had stirred up the Pueblo to take arms against God’s chosen people—the Spanish—but the Spanish, and their God, had prevailed in the end.

Spain shifted strategies after the military expeditions wove their way through the southern and western half of North America. Missions became the engine of colonization in North America. Missionaries, most of whom were members of the Franciscan religious order, provided Spain with an advance guard in North America. Catholicism had always justified Spanish conquest, and colonization always carried religious imperatives. By the early seventeenth century, Spanish friars established dozens of missions along the Rio Grande, in New Mexico, and in California.

How did the Pueblo attempt to maintain their autonomy in the face of Spanish settlement?

Show Answer
As the Spanish tried to convert the Pueblo to Catholicism, the native people tried to fold Christian traditions into their own practices. This was unacceptable to the Spanish, who insisted on complete conversion—especially of the young, whom they took away from their families and tribes. When adaptation failed, native peoples attempted to maintain their autonomy through outright revolt, as with the Pueblo Revolt of 1680. This revolt was successful, and for almost twelve years the Pueblos’ lives returned to normalcy. Their autonomy was short-lived, however, as the Spanish took advantage of continued attacks by the Pueblos’ enemies to reestablish control of the region.

encomienda: a Spanish labor system in which Spaniards were granted the right to command Indian labor, in exchange for providing supposed benefits to natives. In practice, it was a system of exploitation.

repartimiento: a Spanish colonial system requiring Indian towns to supply workers for the colonizers; it replaced the encomienda

Timucua: the native people of Florida, whom the Spanish displaced with the founding of St. Augustine, the first Spanish settlement in North America