John Adams and Foreign Relations in the Early Republic

George Washington, who had been reelected in 1792 by an overwhelming majority, refused to run for a third term, thus setting a precedent for future presidents. In the presidential election of 1796, the two parties—Federalist and Democratic-Republican—competed for the first time. Partisan rancor over the French Revolution and the Whiskey Rebellion fueled the divide between them, and Federalist John Adams defeated his Democratic-Republican rival Thomas Jefferson by a narrow margin of only three electoral votes. In 1800, another close election swung the other way, and Jefferson began a long period of Democratic-Republican government. 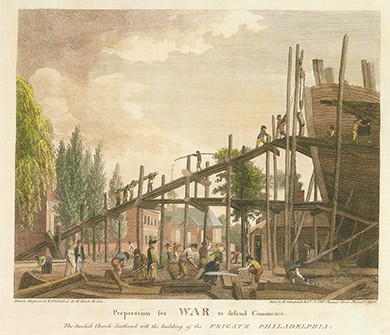 Figure 1. This 1799 print, entitled “Preparation for WAR to defend Commerce,” shows the construction of a naval ship, part of the effort to ensure the United States had access to free trade in the Atlantic world.

The Presidency of John Adams

The war between Great Britain and France in the 1790s shaped U.S. foreign policy. As a new and, in comparison to the European powers, extremely weak nation, the American republic had no control over European events, and no real leverage to obtain its goals of trading freely in the Atlantic. To Federalist president John Adams, relations with France posed the biggest problem. After the Reign of Terror, the French Directory ruled France from 1795 to 1799. During this time, Napoleon rose to power.

Because France and Great Britain were at war, the French Directory issued decrees stating that any ship carrying British goods could be seized on the high seas. In practice, this meant the French would target American ships, especially those in the West Indies, where the United States conducted a brisk trade with the British. France declared its 1778 treaty with the United States null and void, and as a result, France and the United States waged an undeclared war—or what historians refer to as the Quasi-War—from 1796 to 1800. Between 1797 and 1799, the French seized 834 American ships, and Adams urged the buildup of the U.S. Navy, which consisted of only a single vessel at the time of his election in 1796.

In 1797, Adams sought a diplomatic solution to the conflict with France and dispatched envoys to negotiate terms. The French foreign minister, Charles-Maurice de Talleyrand, sent emissaries who told the American envoys that the United States must repay all outstanding debts owed to France, lend France 32 million guilders (Dutch currency), and pay a £50,000 bribe before any negotiations could take place. News of the attempt to extract a bribe, known as the XYZ affair because the French emissaries were referred to as X, Y, and Z in letters that President Adams released to Congress, outraged the American public and turned the American people decidedly against France. In the court of public opinion, Federalists appeared to have been correct in their interpretation of France, while the pro-French Democratic-Republicans had been misled.

This video explains how Jay’s Treaty and the XYZ Affair were evidence of American isolationist practices and efforts to establish relationships with foreign powers that could help grow the economy. President Washington had warned against the risk of getting involved in foreign affairs and in wars with other nations in his farewell address of 1796.

You can view the transcript for “U.S. History | Jay’s Treaty and the XYZ Affair” here (opens in new window).

The Alien and Sedition Acts 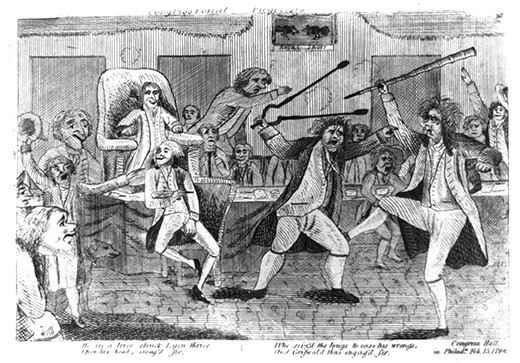 Figure 3. This 1798 cartoon, “Congressional Pugilists,” shows partisan chaos in the U.S. House of Representatives as Matthew Lyon, a Democratic-Republican from Vermont, holds forth against his opponent, Federalist Roger Griswold.

The surge of animosity against France during the Quasi-War led Congress to pass several measures that in time undermined Federalist power. These 1798 war measures, known collectively as the Alien and Sedition Acts, aimed to increase national security against what most had come to regard as the French menace. The Alien Act and the Alien Enemies Act took particular aim at French immigrants fleeing the West Indies by giving the president the power to deport new arrivals who appeared to be a threat to national security. The act expired in 1800 with no immigrants having been deported. The Sedition Act imposed harsh penalties—up to five years’ imprisonment and a massive fine of $5,000 in 1790 dollars—on those convicted of speaking or writing “in a scandalous or malicious” manner against the government of the United States. Twenty-five men, all Democratic-Republicans, were indicted under the act, and ten were convicted. One of these was Congressman Matthew Lyon, representative from Vermont, who had launched his own newspaper, The Scourge Of Aristocracy and Repository of Important Political Truth.

The Alien and Sedition Acts raised constitutional questions about the freedom of the press provided for in the First Amendment. Democratic-Republicans argued that the acts were evidence of the Federalists’ intent to squash individual liberties and, by enlarging the powers of the national government, crush states’ rights. Jefferson and Madison mobilized the response to the acts in the form of statements known as the Virginia and Kentucky Resolutions, which argued that the acts were illegal and unconstitutional. The resolutions introduced the idea of nullification, the right of states to nullify acts of Congress, and advanced the argument of states’ rights. The resolutions failed to rally support in other states, however. Indeed, most other states rejected them, citing the necessity of a strong national government.

The Quasi-War with France came to an end in 1800, when President Adams was able to secure the Treaty of Mortefontaine. His willingness to open talks with France divided the Federalist Party, but the treaty reopened trade between the two countries and ended the French practice of taking American ships on the high seas.

How did U.S. relations with France influence events at the end of the eighteenth century?

Show Answer
Relations with France were strongly tied to political events in the United States. Whereas the Federalists had roundly condemned the French revolutionaries for their excesses, the Democratic-Republicans applauded the rallying cries of liberty and equality. Relations with the French also led the Federalists to pass the Alien and Sedition Acts during the Adams administration, which many saw as a violation of the First Amendment.

Alien and Sedition Acts: passed by the Federalist Congress in 1798 to increase national security during the Quasi-War.  The Sedition Act, particularly, was used against Democratic-Republican opposition and undermined the constitutional protection of free speech

nullification: the idea that states can nullify acts of Congress

Virginia and Kentucky Resolutions: argued that the Alien and Sedition Acts were illegal and unconstitutional; introduced the idea of nullification

XYZ affair: the French attempt to extract a bribe from the United States during the Quasi-War of 1798–1800