Indirect Cause and Effect

Part 2: Indirect Cause and Effect

Indirect Cause and Effect 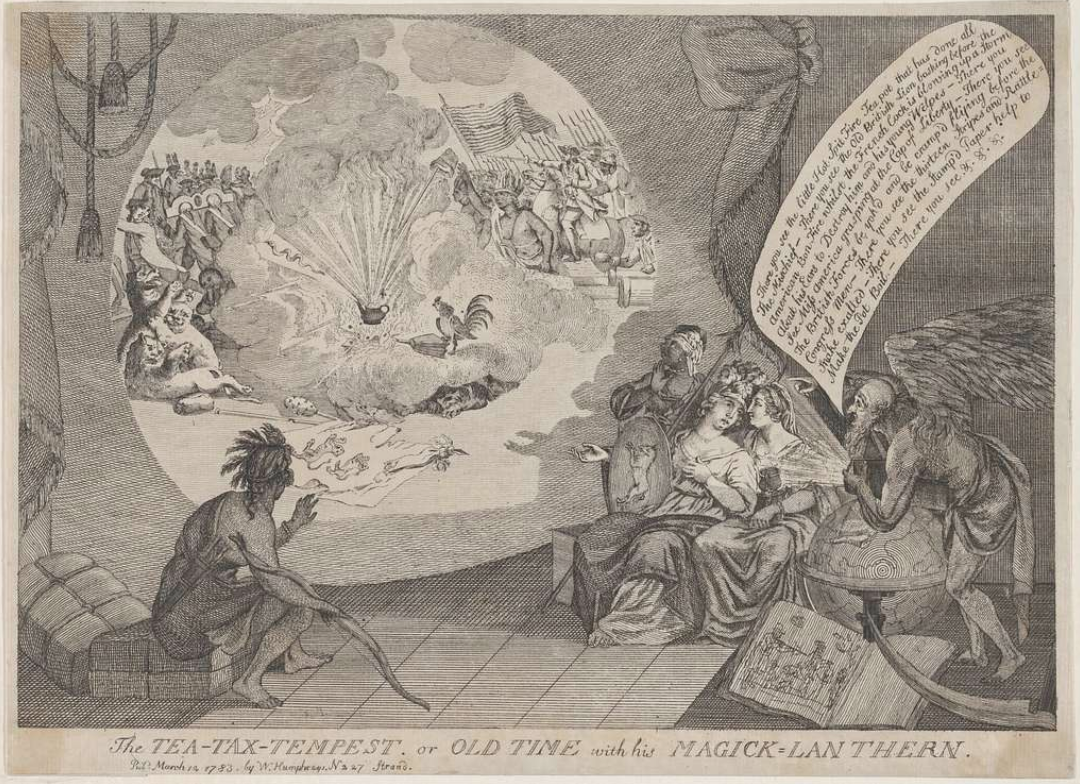 Figure 1. This political cartoon from 1778 shows a continental European view of the American Revolution, showing Father Time using a magic lantern to project the image of a teapot exploding among frightened British troops as American troops advance through the smoke. Figures representing world opinion look on. This cartoon shows the direct relationship between the Tea Act and the American Revolution.

Direct cause and effect means that there is a clear, immediate connection between two events or ideas. Indirect relationships sometimes take more effort or research to see because there are other events, ideas, or a longer period of time separating them. There is also the question of intent. In our previous example, we determined that the Tea Act of 1773 was a direct cause of the Boston Tea Party. We can say this because the men and women who planned and executed the Boston Tea Party did it intentionally to respond to the Tea Act. The British government intended to prevent another war against Native Americans when they established the Proclamation Line of 1763. Indirect relationships between events are often unintentional, because historical actors lack the ability to predict the consequences of their own actions.

The Second Great Awakening and the American church

The Second Great Awakening was essentially America’s version of the Protestant Reformation, where the new culture of the U.S. was wound tightly into the fabric of religious life and institutions. The emphasis on individuality and egalitarianism were uniquely American ideals that spurred on the establishment of new denominations like the Congregationalists, who hoped for a complete departure from the Church of England and the Anglican way of worshipping. With the surge of evangelical fervor, American Christians sought to remake the church in their own image the same way they had remade the nation. These developments included new denominations splitting from the Anglican Church, such as the Episcopal Church, as well as new denominations arriving and taking root in the U.S., which had split earlier in Europe, like the Baptists. The standards for religious authority loosened and shifted more toward charismatic presence and public speaking ability rather than formal religious education. Even the physical practice of worship changed, allowing for animated, physical, almost ecstatic behavior in the pews rather than the stoic, prescribed, low-energy services characteristic of European Protestant churches.

Your readings from the module discussed the theology which developed with the Second Great Awakening, including the idea of personal salvation, “born-again” Christianity, conversion experience, millennial and post-millennialism, and perfectionism. All of these ideas had their roots in Europe, but the difference in the U.S which helped them to become so widely accepted was the precept of religious freedom which Americans had enshrined in their Constitution. For centuries, European states had established an official church, which was supported by taxes and was often the only church allowed to officially exist, with its doctrine and laws being enforced by the state. When the U.S. cast aside the idea of an established state religion, they also opened up their population to many of the “radical” theologies which had been born from the Protestant Reformation.

Think about all of the 19th-century changes that you have read about in previous modules and try to make some connections between the 1st Amendment of the U.S. Constitution and some of the events of the 19th century. Which do you think are direct effects of the establishment of freedom of religion and which do you think are indirect? Consider this, then answer the following question.

The previous practice question dealt with short-term, indirect cause and effect, because all of those events happened within a relatively small space of time, but there was no real intent on the part of the people involved to cause those particular events to occur. Long-term, indirect cause and effect can be harder to see sometimes (like the example with Henry VIII and Prohibition). The activity below deals with events that happened over a longer span of time and over a larger geographic area.

Use the bank below to fill in the blank with the item that best fits the chain of cause and effect between the Elizabethan Religious Settlement that established the Church of England as the official British religion in 1559 and the First Amendment of the U.S. Bill of Rights in 1789. Remember that all of these events or people have multiple relationships and connections, but you should figure out which one fits best based on context and connections that you can see.

Looking at the activity you’ve just done, is it easier to see the connections between various events? We can not only see the direct connections between the end of the English Reformation and the 1st Amendment, but we can also see all of the other small and large events which contributed to it.

Give this activity a try yourself and see if you can connect one of the events below to at least 3 other events. Write up a few sentences about how your events are connected. This is an open-ended exercise, but you can use the space below to jot down your ideas.

The main idea that you should take away from this section is that no single historical event or idea is isolated. Each one was the result of hundreds (if not thousands) of years of other events, ideas, and people. By connecting the 1st Amendment back to 16th-century events in England, we have also connected all of the material from this module to those same events, since we already determined that the 1st Amendment was primarily responsible for the Second Great Awakening and subsequent reform movements in the United States.

Direct cause and effect relationship: there is a clear, immediate connection between two or more events or ideas

Indirect cause and effect relationship: there is a connection between two or more events, but the relationship is likely unintentional and convoluted, as other events, ideas, and time separate the events