Introduction to the Mexican-American War

What you’ll learn to do: describe the events surrounding the Mexican-American War and the ensuing Mexican Cession 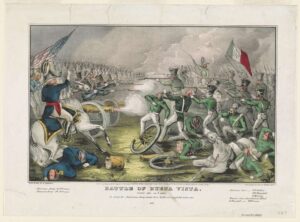 President James K. Polk’s administration was marked by a period of intensive expansion for the United States. After overseeing the final details regarding the annexation of Texas from Mexico, Polk negotiated a peaceful settlement with Great Britain regarding ownership of the Oregon Country, which brought the United States what are now the states of Washington and Oregon. The acquisition of additional lands from Mexico, a country many in the United States perceived as weak and inferior, was not so bloodless. The Mexican Cession moved nearly half of Mexico’s territory to the United States, including New Mexico and California, and established the U.S.-Mexico border at the Rio Grande.