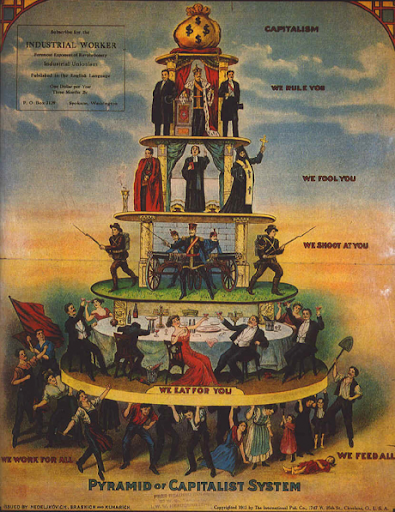 Figure 1. This propaganda poster was adapted and widely circulated in the US (originally produced in Russia c. 1901). It demonstrates the hierarchy of the capitalist economic system, with the workers at the bottom, holding up the entire system, the middle class above them, and then the other tiers above them (the army, the clergy, and state officials), topped by a sack of money representing capitalism. On the sides you can see workers in a state of revolt. Although this image is from almost 50 years after the Civil War, it is relevant to the emerging social class system initiated during the Industrial Revolution.

For this assignment, you will answer the seven questions below based on the “Pyramid of Capitalist System” image above, keeping in mind your readings from this module. You may also do your own independent research on the topic, but be sure to cite your sources. For this assignment, you will practice using footnotes to cite your sources. This is good practice for reading and writing future research papers and professional documents.

How to Create Footnotes: This assignment will involve practice using footnotes for source documentation and citations. When you want to back up a claim or cite a fact, write the sentence out and then after the final punctuation, add a footnote. In Google Docs, you can do this by clicking ‘Insert’ and then ‘Footnote.’ In a Word document, click on the ‘References’ tab and then ‘Insert Footnote.’ Follow Chicago citation style for the citation format.

Captain America is unequivocally the best Avenger, both in terms of ‘super-human’ abilities and in terms of moral strength.1

In Captain America: The First Avenger, Dr. Erskine tells Steve that he must promise to stay who he is, “not a perfect soldier, but a good man.”2

1 Find a source that supports your claim and cite it here.

Note: If it helps you to visualize, you can sketch your new pyramid out on scratch paper. You do not need to turn this in! It is just a reference for you to use.

For each item below, note which tier this person would belong to on your new pyramid from Step 1, then write at least 5-6 sentences about how the growth of industrial manufacturing might affect or change that particular individual’s life. Use examples of specific events or policies from the reading. Note: You can get creative with this one! You could write in the first person, as if the individual is sending a letter, or you could write your answer in the form of a news article centered on that individual. You will not be graded on creativity, this is just an exercise to help you put yourself in someone else’s figurative shoes.