Consumption, trade, and slavery drew the colonies closer to Great Britain, but politics and government split them further apart. The democracies in Europe more closely resembled oligarchies rather than republics, with only elite members of society eligible to serve in elected positions. Most European states did not hold regular elections, with Britain and the Dutch Republic being the two major exceptions. However, even in these countries, only approximately 1% of males could vote. In the North American colonies, by contrast, White male suffrage was nearly universal. In addition to having greater popular involvement, colonial government also had more power in a variety of areas. Assemblies and legislatures regulated businesses, imposed new taxes, cared for the poor in their communities, built roads and bridges, and made most decisions concerning education. Colonial Americans sued often, which in turn led to more power for local judges and more prestige in jury service. Thus, lawyers became extremely important in American society, and in turn, played a greater role in American politics.

American society was less tightly controlled than European society. This led to the rise of various interest groups, each at odds with the other. These diverse interest groups arose based on common priorities. Some commonalities arose over class-based distinctions, while others were due to ethnic or religious ties. One of the major differences between present-day politics and colonial political culture was the lack of distinct, stable, political parties. The most common disagreement in colonial politics was between the elected assemblies and the royal governor. Generally, the colonial legislatures were divided into factions who either supported or opposed the current governor’s political ideology.

Politics in the Colonies

As far as political structure, colonies fell under one of three main categories: provincial, proprietary, and charter. The provincial colonies included New Hampshire, New York, Virginia, North Carolina, South Carolina, and Georgia. The proprietary colonies included Pennsylvania, Delaware, New Jersey, and Maryland. The charter colonies included Massachusetts, Rhode Island, and Connecticut. The provincial colonies were the most tightly controlled by the crown. The British king appointed all of the provincial governors. These crown governors could veto any decision made by the legislative assemblies in the provincial colonies. The proprietary colonies had a similar structure, with one important difference: governors were appointed by a lord proprietor, an individual who had purchased or received the rights to the colony from the crown. This generally led to proprietary colonies having more freedoms and liberties than other colonies in colonial America. The charter colonies had the most complex system of government, formed by political corporations or interest groups who drew up a charter that clearly delineated powers between executive, legislative, and judiciary branches of government. As opposed to having governors appointed, the charter colonies elected their own governors from among the property-owning men in the colony. 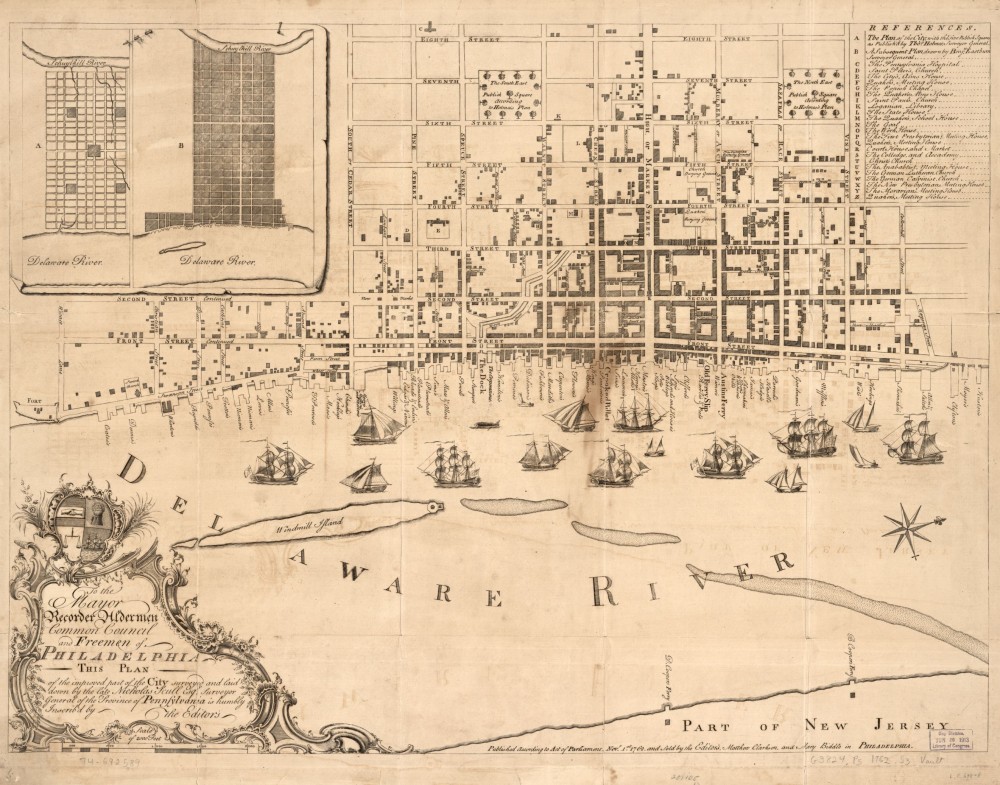 Figure 1. A part of the city plan of Philadelphia by Nicholas Scull

After the governor, colonial government was broken down into two main divisions: the council and the assembly. The council was essentially the governor’s cabinet, often composed of prominent individuals within the colony, such as the head of the militia, or the attorney-general of the colony. The governor appointed these men, often subject to approval from Parliament. The assembly was composed of elected, property-owning men whose official goal was to ensure that colonial law conformed to English law. The colonial assemblies approved new taxes and the colonial budgets. However, many of these assemblies saw it as their duty to check the power of the governor and ensure that he did not take too much power within colonial government. Unlike Parliament, most of the men who were elected to an assembly came from local districts, with their constituency able to hold their elected officials accountable to promises made.

An elected assembly was an offshoot of the idea of civic duty, the notion that men had a responsibility to support and uphold the government through voting, paying taxes, and service in the militia. Americans firmly accepted the idea of a social contract, the idea that government was put in place by the people and derived its legitimacy through their consent. Philosophers such as Thomas Hobbes and John Locke pioneered this idea, and there is evidence to suggest that these writers influenced the colonists. While in practice elites controlled colonial politics, in theory many colonists believed in the notion of equality before the law and opposed special treatment for any members of colonial society.

Watch this video to learn more about the British political policies that influenced colonial governments.

Whether or not African-Americans, Native Americans, and women would also be included in this notion of equality before the law was far less clear. In particular, women’s role in the family became more complicated. Many historians view this period as a significant time of transition. Importantly, Anglo-American families during the colonial period differed from their European counterparts. Widely available land and plentiful natural resources allowed for greater fertility and thus encouraged more people to marry earlier in life. Yet while young marriages and large families were common throughout the colonial period, family sizes started to shrink by the end of the 1700s as wives asserted more control over their own bodies.

New ideas governing romantic love helped to change the nature of husband-wife relationships. Deriving their views in part from the sentimental literary movement, many Americans began to view marriage as an emotionally fulfilling relationship rather than a strictly economic partnership. Referring to one another as “Beloved of my Soul” or “My More than Friend,” newspaper editor John Fenno and his wife Mary Curtis Fenno illustrate what some historians refer to as the “companionate ideal.” While away from his wife, John felt a “vacuum in my existence,” a sentiment returned by Mary’s “Doting Heart.” Indeed, after independence, wives began to not only provide emotional sustenance to their husbands, but to inculcate the principles of republican citizenship as “republican wives.”

Marriage opened up new emotional realms for some but remained oppressive for others. For the millions of Americans bound in chattel slavery, marriage remained an informal arrangement rather than a codified legal relationship. For White women, the legal practice of coverture meant that women lost all of their political and economic rights to their husband. Divorce rates rose throughout the 1790s, as did less formal cases of abandonment. Newspapers published advertisements by deserted men and women denouncing their partners publically. Known as “elopement notices,” they cataloged the various sorts of misbehavior of deviant spouses, such as wives’ “indecent manner,” a way of implying sexual impropriety. As violence and inequality continued in many American marriages, wives in return highlighted their husbands’ “drunken fits” and violent rages. One woman noted how her partner “presented his gun at my breast… and swore he would kill me.”

That couples would turn to newspapers as a source of expression illustrates the importance of what historians call print culture. Print culture includes the wide range of factors contributing to how books and other printed objects are made, including the relationship between the author and the publisher, the technical constraints of the printer, and the tastes of readers. In colonial America, regional differences in daily life impacted the way colonists made and used printed matter. However, all the colonies dealt with threats of censorship and control from imperial supervision. In particular, political content stirred the most controversy.

From the establishment of Virginia in 1607, printing was regarded either as unnecessary within such harsh living conditions or it was actively discouraged. The governor of Virginia, Sir William Berkeley, summed up the attitude of the ruling class in 1671: “I thank God there are no free schools nor printing…for learning has brought disobedience, and heresy…and printing has divulged them.” Ironically, the circulation of hand-written tracts contributed to Berkeley’s undoing. The popularity of Nathaniel Bacon’s uprising was in part due to widely circulated tracts questioning Berkeley’s competence. Berkeley’s harsh repression of Bacon’s Rebellion was equally well documented. It was only after Berkeley’s death in 1677 that the idea of printing in the Southern colonies was revived. William Nuthead, an experienced English printer, set up shop in 1682, although the next governor of the colony, Thomas Culpeper forbade Nuthead from completing a single project. It wasn’t until William Parks set up his printing shop in Annapolis in 1726 that the Chesapeake had a stable local trade in printing and books.

Print culture was very different in New England. Puritans had an established respect for print from the very beginning. Unfortunately, New England’s authors were content to publish in London, making the foundations of Stephen Daye’s first print shop in 1639 very shaky. Typically printers made their money from printing sheets, not books to be bound. The case was similar in Massachusetts, where the first printed work was a Freeman’s Oath. The first book was not issued until 1640, the Bay Psalm Book, of which 11 known copies survive. His contemporaries recognized the significance of Daye’s printing, and he was awarded 140 acres of land. The next large project, the first bible to be printed in America, was undertaken by Samuel Green and Marmaduke Johnson, published 1660. That same year, the Eliot Bible, named for its translator John Eliot, was printed in the Natick dialect of the local Algonquin tribes.

Massachusetts remained the center of colonial printing for a hundred years, until Philadelphia overtook Boston in 1770.  Philadelphia’s rise as the printing capital of the colonies began with two important features: first, the arrival of Benjamin Franklin in 1723, equal parts scholar and businessman, and second, waves of German immigrants created a demand for German-language press. From the mid-1730s, Christopher Sauer, and later his son, wholly met this demand with German-language newspapers and religious texts. Nevertheless, Franklin was a one-man culture of print, revolutionizing the book trade in addition to creating public learning initiatives such as the Library Company and the Academy of Philadelphia. His Autobiography offers one of the most detailed glimpses of life in a print shop available. Given the flurry of newspapers, pamphlets, and books for sale in Franklin’s Philadelphia, it is little wonder that in 1775 Thomas Paine had his Common Sense printed in hundreds of thousands of copies with the Philadelphia printer Robert Bell. 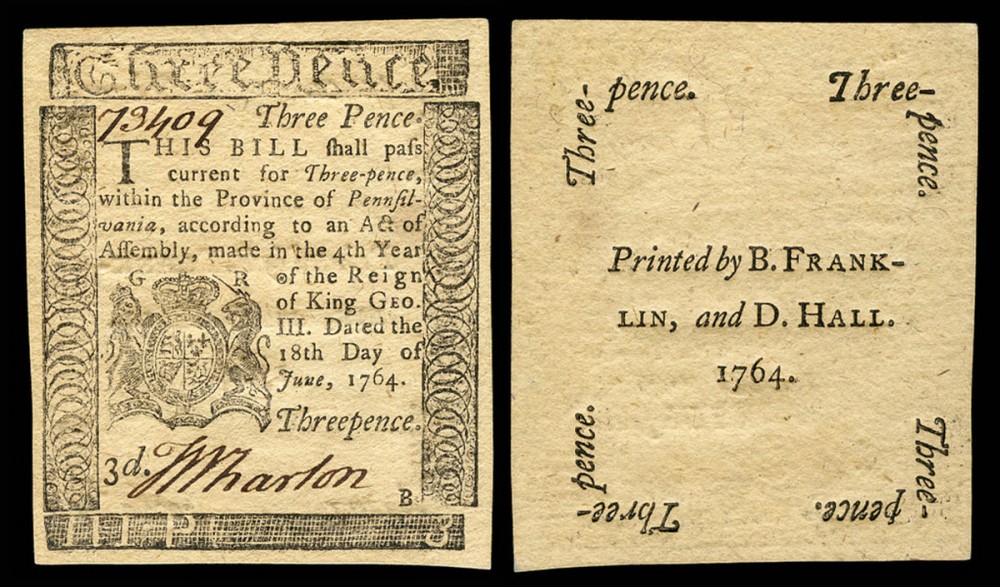