Slaves resisted their enslavement in small ways every day, but this resistance did not usually translate into mass uprisings. Enslaved persons understood that the chances of ending slavery through rebellion were slim and would likely result in massive retaliation; many also feared the risk that participating in such actions would pose to themselves and their families. White enslavers, however, constantly feared uprisings and took drastic steps, including torture and mutilation, whenever they believed that rebellions might be simmering. Gripped by the fear of insurrection, Whites often imagined revolts to be in the works even when no uprising actually happened.

An enslaved laborer named John Brown lived in Virginia, North Carolina, and Georgia before he escaped and moved to England. While there, he dictated his autobiography to someone at the British and Foreign Anti-Slavery Society, who published it in 1855.

I really thought my mother would have died of grief at being obliged to leave her two children, her mother, and her relations behind. But it was of no use lamenting, the few things we had were put together that night, and we completed our preparations for being parted for life by kissing one another over and over again, and saying good bye till some of us little ones fell asleep. . . . And here I may as well tell what kind of man our new master was. He was of small stature, and thin, but very strong. He had sandy hair, a very red face, and chewed tobacco. His countenance had a very cruel expression, and his disposition was a match for it. He was, indeed, a very bad man, and used to flog us dreadfully. He would make his slaves work on one meal a day, until quite night, and after supper, set them to burn brush or spin cotton. We worked from four in the morning till twelve before we broke our fast, and from that time till eleven or twelve at night . . . we labored eighteen hours a day.

—John Brown, Slave Life in Georgia: A Narrative of the Life, Sufferings, and Escape of John Brown, A Fugitive Slave, Now in England, 1855

What features of the domestic slave trade does Brown’s narrative illuminate? Why do you think he brought his story to an antislavery society? How do you think people responded to this narrative?

The Louisiana Rebellion of 1811

At least two major slave uprisings did occur in the antebellum South. The first, known as the German Coast Uprising, Andry’s Rebellion, or the Louisian Rebellion of 1811, is the largest in U.S. History. In 1811, a major rebellion broke out in the sugar parishes of the booming territory of Louisiana. Inspired by the successful overthrow of the White planter class in Haiti, Louisiana slaves took up arms against planters. Perhaps as many five hundred enslaved people joined the rebellion, led by Charles Deslondes, a mixed-race enslaved man who was a slave driver on a sugar plantation owned by Manuel Andry.

As we learned previously, New Orleans was a growing and diverse city, with key access to the mouth of the Mississippi River. The area was controlled by Native Americans, then the French, briefly the Spanish, and then the French again until it became a territory of the United States under the Louisiana Purchase. People from many nations came to the area, including Germans in the 1720s who settled the area that would later become known as the German Coast. New Orleans had a heterogeneous population; an 1805 census reported 8,500 people (though many historians believe the count was higher), comprising 3,551 Whites, 1,556 free Blacks, and 3,105 enslaved laborers.

Andry’s Rebellion was not the first slave rebellion in the area. In the 1780s, Jean Saint Malo, an escaped enslaved person, established a colony of maroons in the swamps below New Orleans, which eventually led Spanish officials to send militia, who captured him. St. Malo became a folk hero after his execution in New Orleans on June 19, 1784. A decade later, during the height of the French Revolution, Spanish officials discovered a slave conspiracy at Pointe Coupee (established by French settlers around 1720 between Natchez and New Orleans). That slave uprising during the Easter holidays was suppressed before it came to fruition, and resulted in 23 executions by hanging (with the decapitated heads then displayed on the road to New Orleans) and 31 additional enslaved people were flogged and sent to serve hard labor in other Spanish outposts.

After the Haitian slave revolution, planters attempted to establish similar lucrative sugarcane plantations on the Gulf Coast, resulting in a dense enslaved population. In the overall Territory of Orleans, from 1803 to 1811, the free Black population nearly tripled, to 5,000, with 3,000 arriving as migrants from Haiti (via Cuba) in 1809–1810. In Saint-Domingue they had enjoyed certain rights as gens de couleur, including owning enslaved persons themselves. Furthermore, between 1790 and 1810, slave traders brought around 20,000 enslaved Africans to New Orleans. All of this set the stage for the German Coast Uprising of 1811.

The revolt began in January 1811 on Andry’s plantation. Deslondes and other enslaved people attacked the Andry household, where they killed the enslaver’s son (although Andry himself escaped). The rebels then began traveling toward New Orleans, armed with weapons gathered at Andry’s plantation. Whites mobilized to stop the rebellion, but not before Deslondes and the other rebelling enslaved people set fire to three plantations and killed numerous Whites. A small White force led by Andry ultimately captured Deslondes, whose body was mutilated and burned following his execution. Other enslaved rebels were beheaded, and their heads placed on pikes along the Mississippi River.

Watch this CrashCourse Black American History video to learn more about the Louisiana Rebellion of 1811.

The second rebellion, led by the enslaved worker Nat Turner, occurred in 1831 in Southampton County, Virginia. Turner had suffered not only from personal enslavement, but also from the additional trauma of having his wife sold away from him. Bolstered by Christianity, Turner became convinced that like Christ, he should lay down his life to end slavery. He preached to fellow enslaved persons in Southampton County, gaining a reputation among them as a prophet. He organized them for rebellion, awaiting a sign to begin until an eclipse in August signaled that the appointed time had come.

Turner and seventy other enslaved and free Blacks killed their captors and their captors’ families, as well as many poor White residents they encountered, murdering a total of around sixty-five people, including many women and children. Turner eluded capture until late October, when he was tried, hanged, and then beheaded and quartered. Virginia put to death fifty-six other enslaved people whom they believed to have taken part in the rebellion. In the aftermath, White southerners panicked at the thought of widespread slave rebellion and White vigilante militias killed two hundred more enslaved and free Black people who had no connection to Nat Turner.

Nat Turner on His Battle against Slavery 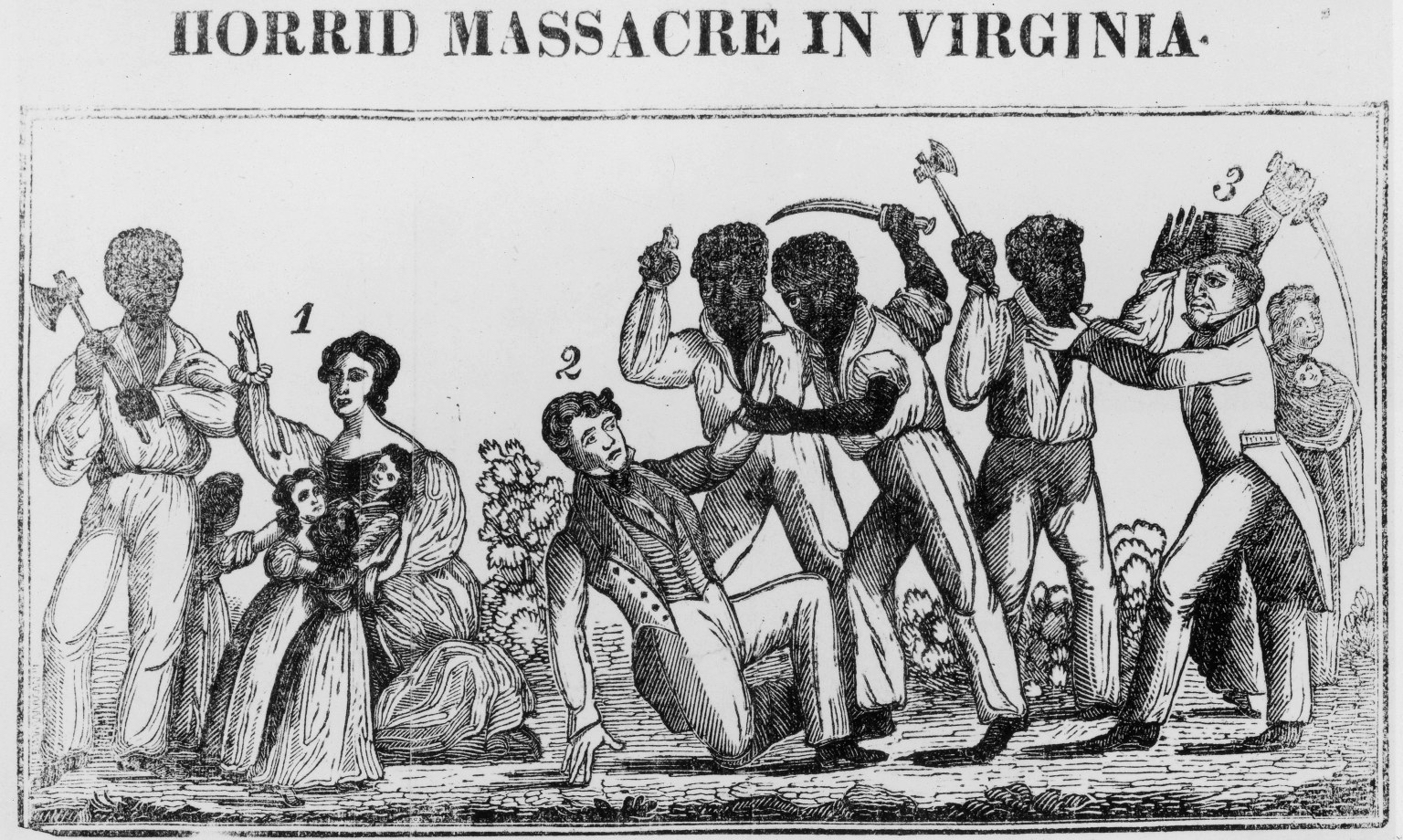 For as the blood of Christ had been shed on this earth, and had ascended to heaven for the salvation of sinners, and was now returning to earth again in the form of dew . . . it was plain to me that the Saviour was about to lay down the yoke he had borne for the sins of men, and the great day of judgment was at hand. . . . And on the 12th of May, 1828, I heard a loud noise in the heavens, and the Spirit instantly appeared to me and said the Serpent was loosened, and Christ had laid down the yoke he had borne for the sins of men, and that I should take it on and fight against the Serpent, . . . Ques. Do you not find yourself mistaken now? Ans. Was not Christ crucified. And by signs in the heavens that it would make known to me when I should commence the great work—and on the appearance of the sign, (the eclipse of the sun last February) I should arise and prepare myself, and slay my enemies with their own weapons.

How did Turner interpret his fight against slavery? What did he mean by the “serpent?”

Nat Turner’s Rebellion provoked a heated discussion in Virginia over slavery. The Virginia legislature was already in the process of revising the state constitution, and some delegates advocated for an easier manumission process. The rebellion, however, rendered that reform impossible. Virginia and other slave states recommitted themselves to the institution of slavery, and defenders of slavery in the South increasingly blamed northerners for provoking their slaves to rebel.

Nat Turner’s Rebellion: a violent revolt led by an enslaved man, Nat Turner, who was thought to be a prophet; Turner and his companions killed several dozen White men, women, and children in Virginia before they were stopped; Turner was executed, along with 56 others, and militias in several southern states killed over 100 more enslaved people in the aftermath.