Introduction to Southern Culture and Wealth

What you’ll learn to do: describe the wealth distribution and culture of honor in the antebellum South, and explain the main proslavery arguments in the years prior to the Civil War 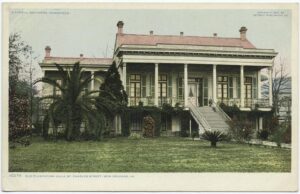 Although a small White elite owned the vast majority of enslaved persons in the South, and most other Whites could only aspire to enslavers’ wealth and status, slavery shaped the social life of all White southerners in profound ways. Southern culture valued a behavioral code in which men’s honor, based on the domination of others and the protection of southern White womanhood, stood as the highest good. Slavery also decreased class tensions, binding Whites together on the basis of race despite their inequalities of wealth. Several defenses of slavery were prevalent in the antebellum era, including John C. Calhoun’s argument that the South’s “concurrent majority” could overrule federal legislation deemed hostile to southern interests; the notion that enslavers’ care of their chattel made enslaved persons better off than wage workers in the North; and the profoundly racist ideas underlying polygenism (a theory positing that human races are of different origins).

The decade of the 1850s witnessed various schemes to expand the American empire of slavery. The Ostend Manifesto articulated the right of the United States to forcefully seize Cuba if Spain would not sell it, while filibuster expeditions attempted to annex new slave states without the benefit of governmental approval. Those who pursued the goal of expanding American slavery believed they embodied the true spirit of White racial superiority.