Wealth in the South

During the antebellum years, wealthy southern planters formed an elite master class that wielded most of the economic and political power of the region. They created their own standards of gentility and honor, defining ideals of southern White manhood and womanhood and shaping the culture of the South. To defend the system of forced labor on which their economic survival and genteel lifestyles depended, elite southerners developed several proslavery arguments that they levied at those who would see the institution dismantled.

Slavery and the White Class Structure

The South prospered, but its wealth was very unequally distributed. Upward social mobility did not exist for the millions of enslaved people who produced a good portion of the nation’s wealth, while poor southern White people envisioned a day when they might rise enough in the world to own enslaved people of their own. Because of the cotton boom, there were more millionaires per capita in the Mississippi River Valley by 1860 than anywhere else in the United States. However, in that same year, only 3 percent of White people enslaved more than fifty people, and two-thirds of White households in the South did not enslave any people at all. Distribution of wealth in the South became less democratic over time; fewer Whites enslaved people in 1860 than in 1840.

At the top of southern White society stood the planter elite, which comprised two groups. In the Upper South, an aristocratic gentry, generation upon generation of whom had grown up with slavery, held a privileged place. In the Deep South, an elite group of enslavers gained new wealth from cotton. Some members of this group hailed from established families in the eastern states (Virginia and the Carolinas), while others came from humbler backgrounds. South Carolinian Nathaniel Heyward, a wealthy rice planter and member of the aristocratic gentry, came from an established family and sat atop the pyramid of southern enslavers. He amassed an enormous estate; in 1850, he enslaved more than eighteen hundred people. When he died in 1851, he left an estate worth more than $2 million (approximately $63 million in 2014 dollars).

As cotton production increased, new wealth flowed to the cotton planters. These planters became the staunchest defenders of slavery, and as their wealth grew, they gained considerable political power.

One member of the planter elite was Edward Lloyd V, who came from an established and wealthy family of Talbot County, Maryland. Lloyd had inherited his position rather than rising to it through his own labors. His hundreds of enslaved people formed a crucial part of his wealth. Like many of the planter elite, Lloyd’s plantation was a masterpiece of elegant architecture and gardens.

One of the people enslaved on Lloyd’s plantation was Frederick Douglass, who escaped in 1838 and became an abolitionist leader, writer, statesman, and orator in the North. In his autobiography, Douglass described the plantation’s elaborate gardens and racehorses, but also its underfed and brutalized population of enslaved persons. Lloyd provided employment opportunities to other Whites in Talbot County, many of whom served as slave traders and the “slave breakers” entrusted with beating and overworking unruly enslaved people into submission. Like other members of the planter elite, Lloyd himself served in a variety of local and national political offices. He was governor of Maryland from 1809 to 1811, a member of the House of Representatives from 1807 to 1809, and a senator from 1819 to 1826. As a representative and a senator, Lloyd defended slavery as the foundation of the American economy.

Wealthy plantation owners like Lloyd came close to forming an American ruling class in the years before the Civil War. They helped shape foreign and domestic policy with one goal in view: to expand the power and reach of the cotton kingdom of the South. Socially, they cultivated a refined manner and believed White people, especially members of their class, should not perform manual labor. Rather, they created an identity for themselves based on a world of leisure in which horse racing and entertainment mattered greatly, and where the enslavement of others was the bedrock of civilization.

Below the wealthy planters were the yeoman farmers, or small landowners. Below yeomen were poor, landless White people, who made up the majority of White people in the South. These landless White men dreamed of owning land and enslaving people and served as slave overseers, drivers, and traders in the southern economy. In fact, owning land and enslaved people provided one of the only opportunities for upward social and economic mobility. In the South, living the American dream meant enslaving people, producing cotton, and owning land. 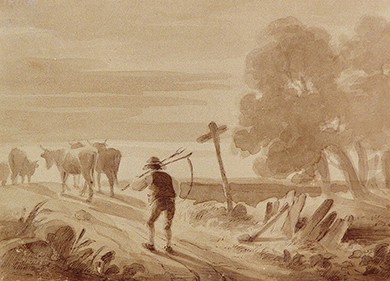 Figure 3. In this painting by Felix Octavius Carr Darley, a yeoman farmer carrying a scythe follows his livestock down the road.

Despite this unequal distribution of wealth, non-enslaver Whites shared with White planters a common set of values, most notably a belief in White supremacy. Whites, whether rich or poor, were bound together by racism. Slavery defused class tensions among them, because no matter how poor they were, White southerners had race in common with the mighty plantation owners. Non-enslavers accepted the rule of the planters as defenders of their shared interest in maintaining a racial hierarchy. Significantly, all Whites were also bound together by the constant, prevailing fear of slave uprisings.

D. R. Hundley was a well-educated planter, lawyer, and banker from Alabama. Something of an amateur sociologist, he argued against the common northern assumption that the South was made up exclusively of two tiers of White residents: the very wealthy planter class and the very poor landless Whites. In his 1860 book, Social Relations in Our Southern States, Hundley describes what he calls the “Southern Yeomen,” a social group he insists is roughly equivalent to the middle-class farmers of the North.

But you have no Yeomen in the South, my dear Sir? Beg your pardon, our dear Sir, but we have—hosts of them. I thought you had only poor White Trash? Yes, we dare say as much—and that the moon is made of green cheese! . . . Know, then, that the Poor Whites of the South constitute a separate class to themselves; the Southern Yeomen are as distinct from them as the Southern Gentleman is from the Cotton Snob. Certainly the Southern Yeomen are nearly always poor, at least so far as this world’s goods are to be taken into account. As a general thing they own no slaves; and even in case they do, the wealthiest of them rarely possess more than from ten to fifteen. . . . The Southern Yeoman much resembles in his speech, religious opinions, household arrangements, indoor sports, and family traditions, the middle class farmers of the Northern States. He is fully as intelligent as the latter, and is on the whole much better versed in the lore of politics and the provisions of our Federal and State Constitutions. . . . [A]lthough not as a class pecuniarily interested in slave property, the Southern Yeomanry are almost unanimously pro-slavery in sentiment. Nor do we see how any honest, thoughtful person can reasonably find fault with them on this account.
—D. R. Hundley, Social Relations in Our Southern States, 1860

Because race bound all White people together as members of the master race, non-enslaving White people took part in civil duties. They served on juries and voted. They also engaged in the daily rounds of maintaining slavery by serving on neighborhood patrols to ensure that enslaved people did not escape and that rebellions did not occur. The practical consequence of such activities was that the institution of slavery, and its perpetuation, became a source of commonality among different economic and social tiers that otherwise were separated by a gulf of difference.

Southern planters exerted a powerful influence on the federal government. Seven of the first eleven presidents were enslavers, and more than half of the Supreme Court justices who served on the court from its inception to the Civil War came from enslaving states. However, southern White yeoman farmers generally did not support an active federal government. They were suspicious of the state bank and supported President Jackson’s dismantling of the Second Bank of the United States. They also did not support taxes to create internal improvements such as canals and railroads; to them, government involvement in the economic life of the nation disrupted what they perceived as the natural workings of the economy. They also feared a strong national government might tamper with slavery.

Planters operated within a larger capitalist society, but the labor system they used to produce goods—that is, slavery—was similar to systems that existed before capitalism, such as feudalism and serfdom. Under capitalism, free workers are paid for their labor (by owners of capital) to produce commodities; the money from the sale of the goods is used to pay for the work performed. As enslaved people did not reap any earnings from their forced labor, some economic historians consider the antebellum plantation system a “pre-capitalist” system.