Honor in the South 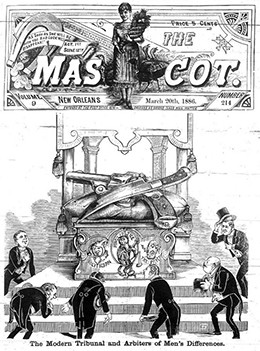 Figure 1. “The Modern Tribunal and Arbiter of Men’s Differences,” an illustration that appeared on the cover of The Mascot, a newspaper published in nineteenth-century New Orleans, reveals the importance of dueling in southern culture; it shows men bowing before an altar on which are laid a pistol and knife.

A complicated code of honor among privileged White southerners, dictating the beliefs and behavior of “gentlemen” and “ladies,” developed in the antebellum years. Maintaining appearances and reputation was supremely important. It can be argued that, as in many societies, the concept of honor in the antebellum South had much to do with control over dependents, whether enslaved people, wives, or relatives. Defending their honor and ensuring that they received proper respect became preoccupations of White people in the slave states of the South. To question another man’s assertions was to call his honor and reputation into question. Insults in the form of words or behavior, such as calling someone a coward, could trigger a rupture that might well end on the dueling ground. Dueling had largely disappeared in the antebellum North by the early nineteenth century, but it remained an important part of the southern code of honor through the Civil War years. Southern White men, especially those of high social status, settled their differences with duels, before which antagonists usually attempted reconciliation, often through the exchange of letters addressing the alleged insult. If the challenger was not satisfied by the exchange, a duel would often result.

The formal duel exemplified the code in action. If two men could not settle a dispute through the arbitration of their friends, they would exchange pistol shots to prove their equal honor status. Duelists arranged a secluded meeting, chose from a set of deadly weapons, and risked their lives as they clashed with swords or fired pistols at one another. Some of the most illustrious men in American history participated in a duel at some point during their lives, including President Andrew Jackson, Vice President Aaron Burr, and U.S. senators Henry Clay and Thomas Hart Benton. In all but Burr’s case, dueling helped elevate these men to prominence.

Violence among the lower classes, especially those in the backcountry, involved fistfights and shoot-outs. Tactics included the sharpening of fingernails and filing of teeth into razor-sharp points, which would be used to gouge eyes and bite off ears and noses. In a duel, a gentleman achieved recognition by risking his life rather than killing his opponent, whereas those involved in rough-and-tumble fighting achieved victory through maiming their opponent.

The legal system was partially to blame for the prevalence of violence in the Old South. Although states and territories had laws against murder, rape, and various other forms of violence, including specific laws against dueling, upper-class southerners were rarely prosecuted, and juries often acquitted the accused. Despite the fact that hundreds of duelists fought and killed one another, there is little evidence that many duelists faced prosecution, and only one, Timothy Bennett (of Belleville, Illinois), was ever executed. By contrast, prosecutors routinely sought cases against lower-class southerners, who were found guilty in greater numbers than their wealthier counterparts.

The dispute between South Carolina’s James Hammond and his erstwhile friend (and brother-in-law) Wade Hampton II illustrates the southern culture of honor and the place of the duel in that culture. A strong friendship bound Hammond and Hampton together. Both stood at the top of South Carolina’s society as successful, married plantation owners involved in state politics. Prior to his election as governor of the state in 1842, Hammond became sexually involved with each of Hampton’s four teenage daughters, who were his nieces by marriage. “[A]ll of them rushing on every occasion into my arms,” Hammond confided in his private diary, “covering me with kisses, lolling on my lap, pressing their bodies almost into mine . . . and permitting my hands to stray unchecked.” Hampton found out about these dalliances, and in keeping with the code of honor, could have demanded a duel with Hammond. However, Hampton instead tried to use the liaisons to destroy his former friend politically. This effort proved disastrous for Hampton, because it represented a violation of the southern code of honor. “As matters now stand,” Hammond wrote, “he [Hampton] is a convicted dastard who, not having nerve to redress his own wrongs, put forward bullies to do it for him. . . . To challenge me [to a duel] would be to throw himself upon my mercy for he knows I am not bound to meet him [for a duel].” Because Hampton’s behavior marked him as a man who lacked honor, Hammond was no longer bound to meet Hampton in a duel even if Hampton were to demand one. Hammond’s reputation, though tarnished, remained high in the esteem of South Carolinians, and the governor went on to serve as a U.S. senator from 1857 to 1860. As for the four Hampton daughters, they never married; their names were disgraced, not only by the whispered-about scandal but by their father’s actions in response to it; and no man of honor in South Carolina would stoop so low as to marry them.

Gender and the Southern Household

The antebellum South was an especially male-dominated society. Far more than in the North, southern men, particularly wealthy planters, were patriarchs and sovereigns of their own household. Among the White members of the household, labor and daily ritual conformed to rigid gender delineations. Men represented their household in the larger world of politics, business, and war. Within the family, the patriarchal male was the ultimate authority. White women were relegated to the household and lived under the thumb and protection of the male patriarch. The ideal southern lady conformed to her prescribed gender role, a role that was largely domestic and subservient. While responsibilities and experiences varied across different social tiers, women’s subordinate state in relation to the male patriarch remained the same. 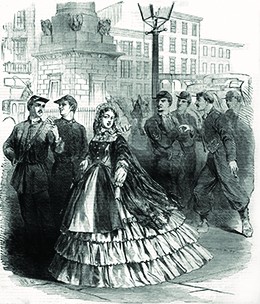 Figure 2. This cover illustration from Harper’s Weekly in 1861 shows the ideal of southern womanhood.

Female labor was an important aspect of the southern economy, but the social position of women in southern culture was understood not through economic labor but rather through moral virtue. While men fought to get ahead in the turbulent world of the cotton boom, women were instructed to offer a calming, moralizing influence on husbands and children. The home was to be a place of quiet respite and spiritual solace. Under the guidance of a virtuous woman, the southern home would foster the values required for economic success and cultural refinement. Female virtue came to be understood largely as a euphemism for sexual purity, and southern culture, southern law, and southern violence largely centered on protecting that virtue of sexual purity from any possible imagined threat. In a world saturated with the sexual exploitation of Black women, southerners developed a paranoid obsession with protecting the sexual purity of White women. Black men were presented as an insatiable sexual threat. Racial systems of violence and domination were wielded with crushing intensity for generations, all in the name of keeping White womanhood as pure as the cotton that anchored southern society.

Writers in the antebellum period were fond of celebrating the image of the ideal southern woman. One such writer, Thomas Roderick Dew, president of Virginia’s College of William and Mary in the mid-nineteenth century, wrote approvingly of the virtue of southern women, a virtue he concluded derived from their natural weakness, piety, grace, and modesty. In his Dissertation on the Characteristic Differences Between the Sexes, he writes that southern women derive their power not by leading armies to combat, or of enabling her to bring into more formidable action the physical power which nature has conferred on her. No! It is but the better to perfect all those feminine graces, all those fascinating attributes, which render her the center of attraction, and which delight and charm all those who breathe the atmosphere in which she moves; and, in the language of Mr. Burke, would make ten thousand swords leap from their scabbards to avenge the insult that might be offered to her. By her very meekness and beauty does she subdue all around her.

Such popular idealizations of elite southern White women, however, are difficult to reconcile with their lived experience: in their own words, these women frequently described the trauma of childbirth, the loss of children, and the loneliness of the plantation.

Louisa Cheves McCord was born in Charleston, South Carolina, in 1810. A child of some privilege in the South, she received an excellent education and became a prolific writer. As the excerpt from her poem “Woman’s Progress” indicates, some southern women also contributed to the idealization of southern White womanhood.

Sweet Sister! stoop not thou to be a man!
Man has his place as woman hers; and she
As made to comfort, minister and help;
Moulded for gentler duties, ill fulfils
His jarring destinies. Her mission is
To labour and to pray; to help, to heal,
To soothe, to bear; patient, with smiles, to suffer;
And with self-abnegation noble lose
Her private interest in the dearer weal
Of those she loves and lives for. Call not this—
(The all-fulfilling of her destiny;
She the world’s soothing mother)—call it not,
With scorn and mocking sneer, a drudgery.
The ribald tongue profanes Heaven’s holiest things,
But holy still they are. The lowliest tasks
Are sanctified in nobly acting them.
Christ washed the apostles’ feet, not thus cast shame
Upon the God-like in him. Woman lives
Man’s constant prophet. If her life be true
And based upon the instincts of her being,
She is a living sermon of that truth
Which ever through her gentle actions speaks,
That life is given to labour and to love.—Louisa Susanna Cheves McCord, “Woman’s Progress,” 1853

What womanly virtues does Louisa Cheves McCord emphasize? How might her social status, as an educated southern woman of great privilege, influence her understanding of gender relations in the South?

For enslaver Whites, the male-dominated household operated to protect gendered divisions and prevalent gender norms; for enslaved women, however, the same system exposed them to brutality and frequent sexual domination. The demands on the labor of enslaved women made it impossible for them to perform the role of domestic caretaker that was so idealized by southern men. That enslavers put them out into the fields, where they frequently performed work traditionally thought of as male, reflected little the ideal image of gentleness and delicacy reserved for White women. Nor did the enslaved woman’s role as daughter, wife, or mother garner any patriarchal protection. Each of these roles and the relationships they defined was subject to the prerogative of a master, who could freely violate enslaved women’s persons, sell off their children, or separate them from their families.