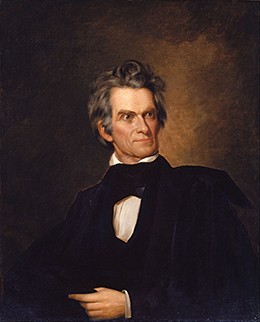 With the rise of democracy during the Jacksonian era in the 1830s, enslavers worried about the power of the majority. If political power went to a majority that was hostile to slavery, the South—and the honor of White southerners—would be imperiled. White southerners keen on preserving the institution of slavery bristled at what they perceived to be northern attempts to deprive them of their livelihood. Powerful southerners like South Carolinian John C. Calhoun highlighted laws like the Tariff of 1828 as evidence of the North’s desire to destroy the southern economy and, by extension, its culture. Such a tariff, he and others concluded, would disproportionately harm the South, which relied heavily on imports, and benefit the North, which would receive protections for its manufacturing centers. The tariff appeared to open the door for other federal initiatives, including the abolition of slavery. Because of this perceived threat to southern society, Calhoun argued that states could nullify federal laws. This belief illustrated the importance of the states’ rights argument to the southern states. It also showed enslavers’ willingness to unite against the federal government when they believed it acted unjustly against their interests.

As the nation expanded in the 1830s and 1840s, the writings of abolitionists—a small but vocal group of northerners committed to ending slavery—reached a larger national audience. White southerners responded by putting forth arguments in defense of slavery, their way of life, and their honor. Calhoun became a leading political theorist defending slavery and the rights of the South, which he saw as containing an increasingly embattled minority. He advanced the idea of a concurrent majority, a majority of a separate region (that would otherwise be in the minority of the nation) with the power to veto or disallow legislation put forward by a hostile majority.

Calhoun’s idea of the concurrent majority found full expression in his 1850 essay “Disquisition on Government.” In this treatise, he wrote about government as a necessary means to ensure the preservation of society, since society existed to “preserve and protect our race.” If government grew hostile to society, then a concurrent majority had to take action, including forming a new government. “Disquisition on Government” advanced a profoundly anti-democratic argument. It illustrates southern leaders’ intense suspicion of democratic majorities and their ability to effect legislation that would challenge southern interests.

In this 1837 speech, John C. Calhoun, then a U.S. senator, vigorously defended the institution of slavery and stated the essence of this new intellectual defense of the institution: Southerners must stop apologizing for slavery and reject the idea that it was a necessary evil. Instead, Calhoun insisted, slavery was a “positive good.” He went further, making legal arguments about the Constitution protecting states’ rights to preserve slavery. Calhoun then offered a moral defense of slavery by claiming it to be a more humane method of organizing labor than the conditions wage laborers faced in industrial cities in Europe and the northern United States.

You can visit this site to read John C. Calhoun’s “Disquisition on Government.” Why do you think he proposed the creation of a concurrent majority?

White southerners reacted strongly to abolitionists’ attacks on slavery. In making their defense of slavery, they critiqued wage labor in the North. They argued that the Industrial Revolution had brought about a new type of slavery—wage slavery—and that this form of “slavery” was far worse than the slave labor used on southern plantations. Defenders of the institution also lashed out directly at abolitionists such as William Lloyd Garrison for daring to call into question their way of life. Indeed, Virginians cited Garrison as the instigator of Nat Turner’s 1831 rebellion.

The Virginian George Fitzhugh contributed to the defense of slavery with his book Sociology for the South, or the Failure of Free Society (1854). Fitzhugh argued that laissez-faire capitalism, as celebrated by Adam Smith, benefited only the quick-witted and intelligent, leaving the ignorant at a huge disadvantage. Enslavers, he argued, took care of the ignorant—in Fitzhugh’s argument, the enslaved persons of the South. Southerners provided enslaved persons with care from birth to death, he asserted; this offered a stark contrast to the wage slavery of the North, where workers were at the mercy of economic forces beyond their control. Fitzhugh’s ideas exemplified southern notions of paternalism.

George Fitzhugh, a southern writer of social treatises, was a staunch supporter of slavery, not as a necessary evil but as what he argued was a necessary good, a way to take care of enslaved persons and keep them from being a burden on society. He published Sociology for the South, or the Failure of Free Society in 1854, in which he laid out what he believed to be the benefits of slavery to both the enslaved persons and society as a whole. According to Fitzhugh:

[I]t is clear the Athenian democracy would not suit a negro nation, nor will the government of mere law suffice for the individual negro. He is but a grown up child and must be governed as a child . . . The master occupies towards him the place of parent or guardian. . . . The negro is improvident; will not lay up in summer for the wants of winter; will not accumulate in youth for the exigencies of age. He would become an insufferable burden to society. Society has the right to prevent this, and can only do so by subjecting him to domestic slavery.

In the last place, the negro race is inferior to the white race, and living in their midst, they would be far outstripped or outwitted in the chase of free competition. . . . Our negroes are not only better off as to physical comfort than free laborers, but their moral condition is better.

What arguments does Fitzhugh use to promote slavery? What basic premise underlies his ideas? Can you think of a modern parallel to Fitzhugh’s argument?

The North also produced defenders of slavery, including Louis Agassiz, a Harvard professor of zoology and geology. Agassiz helped to popularize polygenism, the idea that different human races came from separate origins. According to this formulation, no single human family origin existed, and Black people made up a race wholly separate from the White race. Agassiz’s notion gained widespread popularity in the 1850s with the 1854 publication of George Gliddon and Josiah Nott’s Types of Mankind and other books. The theory of polygenism codified racism, giving the notion of Black inferiority the lofty mantle of science. One popular advocate of the idea posited that Black people occupied a place in evolution between the Greeks and chimpanzees.

concurrent majority: a majority of a separate region (that would otherwise be in the minority of the nation) with the power to veto or disallow legislation put forward by a hostile majority

polygenism: the idea that Black people and White people come from different origins