By the 1840s, the United States economy bore little resemblance to the import-and-export economy of colonial days. It was now a market economy, one in which the production of goods, and their prices, were unregulated by the government. Commercial centers, to which job seekers flocked, mushroomed. New York City’s population skyrocketed. In 1790, it was 33,000; by 1820, it had reached 200,000; and by 1825, it had swelled to 270,000. New avenues to prosperity appeared to be available to anyone. However, while opportunities abounded in America’s burgeoning cities, overcrowding and the uncertainties of the new economy also made settlement in the rural Northwest Territories look attractive.

With aspiration comes risk, and the expansion of the American economy made it prone to boom-and-bust cycles. Market economies involve fluctuating prices for labor, raw materials, and consumer goods and depend on credit and financial instruments—any one of which can be the source of an imbalance and an economic downturn in which businesses and farmers default, wage workers lose their employment, and investors lose their assets. This happened for the first time in the United States in 1819, when waves of enthusiastic speculation in land and commodities gave way to drops in prices.

Speculation is an economic concept that can be difficult to grasp. When investors or consumers speculate, it means that they make financial decisions based on the idea that a particular asset might become much more valuable in the future and they will be able to sell it for a profit.

Remember the Beanie Baby Craze of the late-1990’s? If not, congrats, you are not old yet and you can read about it here. People bought up hundreds, sometimes thousands, of dollars worth of Beanie Babies because they believed that they would be worth thousands, or hundreds of thousands, of dollars after 20-30 years. Eventually, the “Beanie Baby Bubble” burst and people realized that their little stuffed animals were not worth as much as they had thought they would be. In fact, most of them ended up on Goodwill shelves and you can get one now for around 25 cents. Anyone who invested a lot of money in the toys lost their investment.

Speculation is essentially the same with the stock market, real estate, and other commodities. When the bubble bursts, investors and regular people can lose everything and the entire economy can sink into a period of depression. 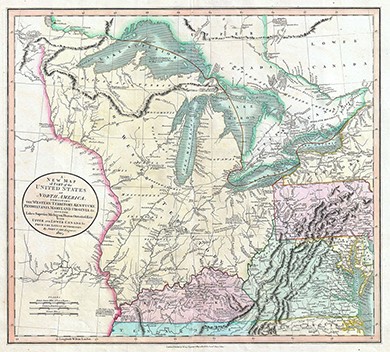 In the early nineteenth century, people poured into the territories west of the long-settled eastern seaboard. Among them were speculators seeking to buy cheap parcels from the federal government in anticipation of a rise in prices. The Ohio Country in the Northwest Territory appeared to offer the best prospects for many in the East, especially New Englanders. The result was “Ohio fever,” as thousands traveled there to reap the benefits of settling in this newly available territory.

The federal government oversaw the orderly transfer of public land to citizens at public auctions. The Land Law of 1796 applied to the territory of Ohio after it had been wrested from the Northwestern Confederacy of Native American tribes during the Northwest Indian War (1785–1795). Under this law, the United States would sell a minimum parcel of 640 acres for $2 an acre. The later Land Law of 1800 further encouraged land sales in the Northwest Territory by reducing the minimum parcel size by half and enabling sales on credit, with the goal of stimulating settlement by ordinary farmers. The government created land offices to handle these sales and established them in the West within easy reach of prospective landowners, who could now purchase land directly from the government a set price. Buyers were given low interest rates, with payments that could be spread over four years. Surveyors marked off the parcels in straight lines, creating a landscape of checkerboard squares.

The future looked bright for those who turned their gaze on the land in the West. Surveying, settling, farming, and turning the wilderness into a profitable commodity gave settlers a sense of progress, purpose, and dignity. A uniquely American story of settling the land developed: hardy individuals wielding an axe cleared it, built a log cabin, and turned the frontier into farmland which paved the way for towns, mills, and eventually cities.

A native of Vermont, Gershom Flagg was one of thousands of New Englanders who caught “Ohio fever.” In this letter to his brother, Azariah Flagg, dated August 3, 1817, he describes the hustle and bustle of the emerging commercial town of Cincinnati.

Cincinnati is an incorporated City. It contained in 1815, 1,100 buildings of different descriptions among which are above 20 of Stone 250 of brick & 800 of Wood. The population in 1815 was 6,500. There are about 60 Mercantile stores several of which are wholesale. Here are a great share of Mechanics of all kinds.

Here is one Woolen Factory four Cotton factories but not now in operation. A most stupendously large building of Stone is likewise erected immediately on the bank of the River for a steam Mill. It is nine stories high at the Waters edge & is 87 by 62 feet. It drives four pair of Stones besides various other Machinery as Wool carding &c &c. There is also a valuable Steam Saw Mill driving four saws also an inclined Wheel ox Saw Mill with two saws, one Glass Factory. The town is Rapidly increasing in Wealth & population. Here is a Branch of the United States Bank and three other banks & two Printing offices. The country around is rich. . . .

What caught Flagg’s attention? From your reading of this letter and study of the engraving below, what impression can you take away of Cincinnati in 1817?

Learn more about the settlement of and immigration to the Northwest Territory by exploring the National Park Service’s Historic Resource Study related to the Lincoln Boyhood National Memorial. According to the guide’s maps, what lands were available for purchase?

land offices: sites where prospective landowners could buy public land from the government

Northwest Indian War (1785–1795): After the American Revolution, the US gained the Northwest Territory from the British. However, Native tribes such as the Iroquois, Cherokee, Shawnee, and many others also claimed the area. The tribes formed the Northwestern Confederacy and, with support from the British, fought against the U.S. and their Chickasaw and Choctaw tribal allies for control of the Ohio Valley. The tribes were defeated and forced to cede the territory, resulting in their forced removal from the land.