There had been earlier efforts to address the Confederation’s perilous state. In early 1786, Virginia’s James Madison advocated a meeting of states to address the widespread economic problems that plagued the new nation. Heeding Madison’s call, the legislature in Virginia invited all thirteen states to meet in Annapolis, Maryland, to work on solutions for the issue of commerce between the states. Eight states responded to the invitation. But the resulting 1786 Annapolis Convention failed to provide any solutions because only five states sent delegates. These delegates did, however, agree to a plan put forward by Alexander Hamilton for a second convention to meet in May 1787 in Philadelphia. Shays’ Rebellion gave greater urgency to the planned convention. In February 1787, in the wake of the uprising in western Massachusetts, the Confederation Congress authorized the Philadelphia convention. This time, all the states except Rhode Island sent delegates to Philadelphia to confront the problems of the day.

The stated purpose of the Philadelphia Convention in 1787 was to amend the Articles of Confederation. Very quickly, however, the attendees decided to create a new framework for a national government. That framework became the United States Constitution, and the Philadelphia convention became known as the Constitutional Convention of 1787. Fifty-five men met in Philadelphia in secret; historians know of the proceedings only because James Madison kept careful notes of what transpired. The delegates knew that what they were doing would be controversial; Rhode Island refused to send delegates, and New Hampshire’s delegates arrived late. Two delegates from New York, Robert Yates and John Lansing, left the convention when it became clear that the Articles were being put aside and a new plan of national government was being drafted. They did not believe the delegates had the authority to create a strong national government.

Read “Reasons for Dissent from the Proposed Constitution” in order to understand why Robert Yates and John Lansing, New York’s delegates to the 1787 Philadelphia Convention, didn’t believe the convention should draft a new plan of national government.

The Question of Representation 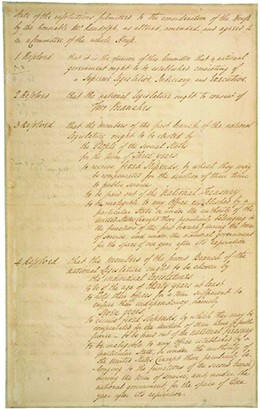 James Madison put forward a proposition known as the Virginia Plan, which called for a strong national government that could overturn state laws. The plan featured a bicameral or two-house legislature, with an upper and a lower house. The people of the states would elect the members of the lower house, whose numbers would be determined by the population of the state. State legislatures would send delegates to the upper house. The number of representatives in the upper chamber would also be based on the state’s population. This proportional representation gave the more populous states, like Virginia, more political power. The Virginia Plan also called for an executive branch and a judicial branch, both of which were absent under the Articles of Confederation. The lower and upper house together were to appoint members to the executive and judicial branches. Under this plan, Virginia, the most populous state, would dominate national political power and ensure its interests, including slavery, would be safe.

The Virginia Plan’s call for proportional representation alarmed the representatives of the smaller states. William Paterson introduced a New Jersey Plan to counter Madison’s scheme, proposing that all states have equal votes in a unicameral national legislature. He also addressed the economic problems of the day by calling for the Congress to have the power to regulate commerce, to raise revenue through taxes on imports and through postage, and to enforce Congressional requisitions from the states.

This video explains how the Connecticut Compromise ultimately solved the contest between the nationalists, who wanted a strong national government and proportional representation, and those who emphasized state rights and wanted equal state representation.

You can view the transcript for “The Great Compromise” here (opens in new window).

The Question of Slavery

The question of slavery stood as a major issue at the Constitutional Convention because slaveholders wanted enslaved people to be counted along with Whites, termed “free inhabitants,” when determining a state’s total population. This, in turn, would increase the number of representatives accorded to those states in the lower house. Some northerners, however, such as New York’s Gouverneur Morris, hated slavery and did not even want the term included in the new national plan of government. Slaveholders argued that slavery imposed great burdens upon them and that, because they carried this liability, they deserved special consideration; enslaved people needed to be counted for purposes of representation.

The issue of counting or not counting enslaved people for purposes of representation connected directly to the question of taxation. Beginning in 1775, the Second Continental Congress asked states to pay for war by collecting taxes and sending the tax money to the Congress. The amount each state had to deliver in tax revenue was determined by a state’s total population, including both free and enslaved individuals. States routinely fell far short of delivering the money requested by Congress under the plan. In April 1783, the Confederation Congress amended the earlier system of requisition by having enslaved people count as three-fifths of the White population. In this way, slaveholders gained a significant tax break. The delegates in Philadelphia adopted this same three-fifths formula in the summer of 1787.

Under the three-fifths compromise in the 1787 Constitution, each enslaved person would be counted as three-fifths of a White person. Article 1, Section 2 stipulated that “Representatives and direct Taxes shall be apportioned among the several states . . . according to their respective Number, which shall be determined by adding to the whole number of free Persons, including those bound for service for a Term of Years [White servants], and excluding Indians not taxed, three fifths of all other persons.” Since representation in the House of Representatives was based on the population of a state, the three-fifths compromise gave extra political power to states with an enslaved population, although not as much as if the total population, both free and slave, had been used. Significantly, no direct federal income tax was immediately imposed. (The Sixteenth Amendment, ratified in 1913, put in place a federal income tax.) Northerners agreed to the three-fifths compromise because the Northwest Ordinance of 1787, passed by the Confederation Congress, banned slavery in the future states of the northwest. Northern delegates felt this ban balanced political power between states with slaves and those without. The three-fifths compromise gave an advantage to slaveholders; they added three-fifths of their human property to their state’s population, allowing them to send representatives based in part on the number of enslaved people they held, even though those people were not allowed to speak for themselves or vote.

The Question of Democracy

Many of the delegates to the Constitutional Convention had serious reservations about democracy, which they believed promoted anarchy. To allay these fears, the Constitution blunted democratic tendencies that appeared to undermine the republic. Thus, to avoid giving the people too much direct power, the delegates made certain that senators were chosen by the state legislatures, not elected directly by the people (direct elections of senators came with the Seventeenth Amendment to the Constitution, ratified in 1913). As an additional safeguard, the delegates created the Electoral College, the mechanism for choosing the president. Under this plan, each state has a certain number of electors, which is its number of senators (two) plus its number of representatives in the House of Representatives. Critics, then as now, argue that this process prevents the direct election of the president.

You can view the transcript for “The Constitution, the Articles, and Federalism” here (opens in new window).

Explain the argument that led to the three-fifths rule and the consequences of that rule.

anti-federalists: those who opposed the 1787 Constitution and favored stronger individual states

bicameral: having two legislative houses, an upper and a lower house

electoral college: the mechanism by which electors, based on the number of representatives from each state, choose the president

federalists: those who supported the 1787 Constitution and a strong central government; these advocates of the new national government formed the ruling political party in the 1790s

three-fifths compromise: the agreement at the Constitutional Convention that each enslaved person would count as three-fifths of a White person for purposes of representation