The Freedmen’s Bureau and Black Codes

President Johnson and Congress’s views on Reconstruction grew even further apart as Johnson’s presidency progressed. Congress repeatedly pushed for greater rights for freed people and a far more thorough reconstruction of the South, while Johnson pushed for leniency and a swifter reintegration. President Johnson lacked Lincoln’s political skills and instead exhibited a stubbornness and confrontational approach that aggravated an already difficult situation.

Freed people everywhere celebrated the end of slavery and immediately began to take steps to improve their own condition by seeking what had long been denied to them: land, financial security, education, and the ability to participate in the political process. They wanted to be reunited with family members, make their marriages legal, grasp the opportunity to make their own independent living, and exercise their right to have a say in their own government. 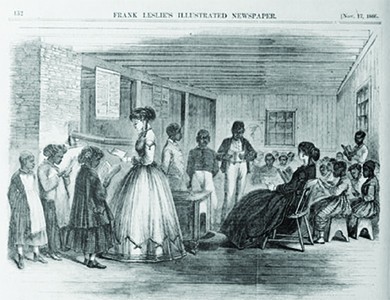 Figure 1. The Freedmen’s Bureau, as shown in this 1866 illustration from Frank Leslie’s Illustrated Newspaper, created many schools for Black elementary school students. Many of the teachers who provided instruction in these southern schools, though by no means all, came from northern states.

However, they faced the wrath of defeated but un-reconciled southerners who were determined to keep Blacks an impoverished and despised underclass. Recognizing the widespread devastation in the South and the dire situation of freed people, Congress created the Bureau of Refugees, Freedmen, and Abandoned Lands in March 1865, popularly known as the Freedmen’s Bureau. Lincoln had approved of the bureau, giving it a charter for one year.

The Freedmen’s Bureau engaged in many initiatives to ease the transition from slavery to freedom. The purpose of the organization was to assist newly emancipated Black Americans in securing safe housing, work, education, and basic essentials like food, medical care, and clothing. It delivered food to Blacks and Whites alike in the South. The Bureau also assisted in reuniting families that had been torn apart through the interstate slave trade. Bureau workers assisted with reading and signing labor contracts, since many formerly enslaved Americans could not read or write. They provided legal counsel and representation to Black Americans who found themselves entangled in the Southern legal system. Funds were also provided to the Bureau so that they could assist planters in paying wages to the formerly enslaved workers that the Bureau helped them to hire.

It helped reunite families of freedmen, and it also devoted much energy to education, establishing scores of public schools where freed people and poor Whites could receive both elementary and higher education. The Bureau’s greatest success was in establishing public schools for formerly enslaved children and adults where they could learn basic reading, writing, and math. These schools saw extremely high attendance rates and were successful at bringing the basics of education to newly emancipated Black Americans. Respected institutions such as Fisk University, Howard University, Hampton University, and Dillard University are part of the legacy of the Freedmen’s Bureau. The Freedmen’s Bureau’s dedication to educating this underserved population is no doubt one of its greatest legacies. 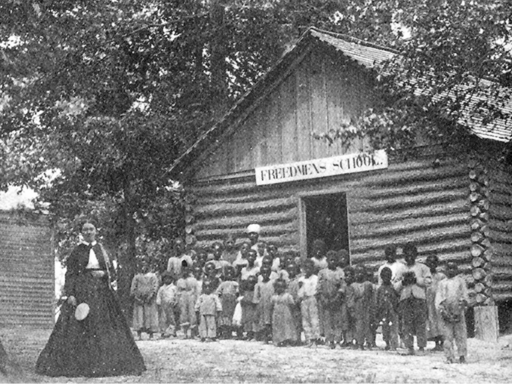 In this endeavor, the Freedmen’s Bureau received support from Christian organizations that had long advocated for abolition, such as the American Missionary Association (AMA). The AMA used the knowledge and skill it had acquired while working in missions in Africa and with Native American groups to establish and run schools for formerly enslaved persons in the postwar South. While men and women, White and Black, taught in these schools, the opportunity was crucially important for participating women. At the time, many opportunities, including admission to most institutes of higher learning, remained closed to women. Participating in these schools afforded these women the opportunities they otherwise may have been denied. Additionally, the fact they often risked their health and safety to work in these schools in the South demonstrated to the nation that women could play a vital role in American civic life.The schools that the Freedmen’s Bureau and the AMA established inspired great dismay and resentment among the White populations in the South and were sometimes targets of violence. Indeed, the Freedmen’s Bureau’s programs and its very existence were sources of controversy. Racists and others who resisted this type of federal government activism denounced it as both a waste of federal money and a foolish effort that encouraged laziness among Blacks. Congress renewed the bureau’s charter in 1866, but President Johnson, who steadfastly believed that the work of restoring the Union had been completed, vetoed the re-chartering. Radical Republicans continued to support the bureau, igniting a contest between Congress and the president that intensified during the next several years. Part of this dispute involved conflicting visions of the proper role of the federal government. Radical Republicans believed in the constructive power of the federal government to ensure a better day for freed people. Others, including Johnson, denied that the government had any such role to play.

In 1867, when the 15th Amendment gave Black men the right to vote, the Bureau assisted with voter registration and other issues related to the polls. However, their efforts were repeatedly blocked by Southern Democrats and violent groups, such as the Ku Klux Klan (KKK).

The image below shows a campaign poster for Hiester Clymer, who ran for governor of Pennsylvania in 1866 on a platform of white supremacy.

The image in the foreground shows an indolent Black man wondering, “Whar is de use for me to work as long as dey make dese appropriations.” White men toil in the background, chopping wood and plowing a field. The text above them reads, “In the sweat of thy face shall thou eat bread. . . . The white man must work to keep his children and pay his taxes.” In the middle background, the Freedmen’s Bureau looks like the Capitol, and the pillars are inscribed with racist assumptions of things Blacks value, like “rum,” “idleness,” and “white women.” On the right are estimates of the costs of the Freedmen’s Bureau and the bounties (fees for enlistment) given to both White and Black Union soldiers.

What does this poster indicate about the political climate of the Reconstruction era? How might different people have received this image?

This video describes some of the efforts undertaken by the Freedmen’s Bureau made to help formerly enslaved people to secure jobs, reunite with families, and get an education.

You can view the transcript for “Freedmen’s Bureau” here (opens in new window).

In 1865 and 1866, as Johnson announced the end of Reconstruction, southern states began to pass a series of discriminatory state laws collectively known as Black Codes. While the laws varied in both content and severity from state to state, the goal of the laws remained largely consistent. In effect, these codes were designed to maintain the social and economic structure of racial slavery in the absence of slavery itself. The laws codified White supremacy by restricting the civic participation of enslaved persons who had been freed—depriving them of the right to vote, the right to serve on juries, the right to own or carry weapons, and, in some cases, even the right to rent or lease land.

A chief component of the Black Codes was designed to fulfill an important economic need in the postwar South. Slavery had been a pillar of economic stability in the region before the war. To maintain agricultural production, the South had relied on enslaved laborers to work the land. Now the region was faced with the daunting prospect of making the transition from a slave economy to one where labor was purchased on the open market. Not surprisingly, planters in the southern states were reluctant to make such a transition. Instead, they drafted Black laws that would re-create the antebellum economic structure with the façade of a free-labor system.

Black Codes used a variety of tactics to tie the formerly enslaved to the land. To work, the freed enslaved persons were forced to sign contracts with their employers. These contracts prevented Blacks from working for more than one employer. This meant that, unlike in a free labor market, Blacks could not positively influence wages and conditions by choosing to work for the employer who gave them the best terms. The predictable outcome was that the formerly enslaved were forced to work for very low wages. With such low wages, and no ability to supplement income with additional work, workers were reduced to relying on loans from their employers. The debt that these workers incurred ensured that they could never escape from their condition. Those formerly enslaved people who attempt to violate these contracts could be fined or beaten. Those who refused to sign contracts at all could be arrested for vagrancy and then made to work for no wages, essentially being reduced to the very definition of a slave. Essentially, Black Codes shifted the system from chattel slavery to convict slavery and gave Southern states a litany of reasons to arrest Black men in particular and place them back into a system of forced labor. The situation continued to deteriorate with the rise of the Ku Klux Klan (KKK), which operated outside the law to violently eliminate anyone in the South who supported the Bureau or Reconstruction. Individual Bureau agents and buildings were often targets of violence, as were freedmen who used the resources provided.

These laws and outrageous mob violence against Black southerners led Republicans to call for a more dramatic Reconstruction. Its members felt that ending slavery with the Thirteenth Amendment did not go far enough. So when Johnson announced that the southern states had been restored, congressional Republicans refused to seat delegates from the newly reconstructed states.

Congress extended the life of the Freedmen’s Bureau to combat the Black Codes and in April 1866 passed the first Civil Rights Act, which established the citizenship of African Americans and prohibited any curtailment of citizens’ “fundamental rights.” This was a significant step that contradicted the Supreme Court’s 1857 Dred Scott decision, which declared that Black people could never be citizens. The law also gave the federal government the right to intervene in state affairs to protect the rights of citizens, and thus, of African Americans. President Johnson, who continued to insist that restoration of the United States had already been accomplished, vetoed the 1866 Civil Rights Act. However, Congress mustered the necessary votes to override his veto. Despite the Civil Rights Act, the Black Codes endured, forming the foundation of the racially discriminatory Jim Crow segregation policies that impoverished generations of African Americans.

What was the goal of the Black Codes?

Show Answer
The Black Codes in southern states had the goal of keeping Blacks impoverished and in debt. Black codes outlawed vagrancy and required all Black men to have an annual labor contract, which gave southern states an excuse to arrest those who failed to meet these requirements and put them to hard labor.

1866 Civil Rights Act: an act passed by Congress that established the citizenship of Blacks and prohibited any curtailment of citizens’ “fundamental rights.”

Freedmen’s Bureau: the Bureau of Refugees, Freedmen, and Abandoned Lands, which was created in 1865 to ease Blacks’ transition from slavery to freedom