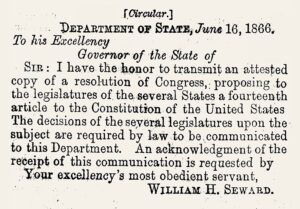 Figure 1. Form of the Letter of Transmittal of the Fourteenth Amendment to the several states for its ratification. Amendments must be passed by 2/3 of the Congress and Senate and then ratified by at least 3/4 of states. State legislatures in every formerly Confederate state, with the exception of Tennessee, first refused to ratify it. This refusal led to the passage of the Reconstruction Acts. Ignoring the existing state governments, military government was imposed until new civil governments were established and the Fourteenth Amendment was ratified.

Questions swirled about the constitutionality of the Civil Rights Act of 1866. The Supreme Court, in its 1857 decision forbidding black citizenship, had interpreted the Constitution in a certain way; many argued that the 1866 statute, alone, could not alter that interpretation. Seeking to overcome all legal questions, Radical Republicans drafted another constitutional amendment with provisions that followed those of the 1866 Civil Rights Act. In July 1866, the Fourteenth Amendment went to state legislatures for ratification.

It gave citizens equal protection under both the state and federal law, overturning the Dred Scott decision. It eliminated the Three-fifths Compromise of the 1787 Constitution, whereby slaves had been counted as three-fifths of a free white person, and it reduced the number of House representatives and Electoral College electors for any state that denied suffrage to any adult male inhabitant, Black or White. As Radical Republicans had proposed in the Wade-Davis bill, individuals who had “engaged in insurrection or rebellion [against] . . . or given aid or comfort to the enemies [of]” the United States were barred from holding political (state or federal) or military office unless pardoned by two-thirds of Congress.

The 14th Amendment and Equal Protection Under the Law

This video from the National Constitution Center explains each of the sections of the 14th amendment and what they mean. You can read the full text of the Fourteenth Amendment at the Our Documents website.

The Fourteenth Amendment’s first section includes several clauses: the Citizenship Clause, Privileges or Immunities Clause, Due Process Clause, and Equal Protection Clause. The Citizenship Clause provides a broad definition of citizenship, nullifying the Supreme Court’s decision in Dred Scott v. Sandford (1857), which had held that Americans descended from African slaves could not be citizens of the United States.

The Due Process Clause prohibits state and local governments from depriving persons of life, liberty, or property without a fair procedure. The Supreme Court has ruled this clause makes most of the Bill of Rights as applicable to the states as it is to the federal government, as well as to recognize substantive and procedural requirements that state laws must satisfy.

The Equal Protection Clause requires each state to provide equal protection under the law to all people, including all non-citizens, within its jurisdiction. This clause has been the basis for many decisions rejecting irrational or unnecessary discrimination against people belonging to various groups. The section is one of the most litigated parts of the Constitution, forming the basis for landmark Supreme Court decisions such as Brown v. Board of Education (1954) regarding racial segregation, Roe v. Wade (1973) regarding abortion, and Obergefell v. Hodges (2015) regarding same-sex marriage. It also provided the basis for Title IX, a federal civil rights law that was passed as part (Title IX) of the Education Amendments of 1972. It prohibits sex-based discrimination in any school or other education program that receives federal money.

The amendment also answered the question of debts arising from the Civil War by specifying that all debts incurred by fighting to defeat the Confederacy would be honored. Confederate debts, however, would not: “[N]either the United States nor any State shall assume or pay any debt or obligation incurred in aid of insurrection or rebellion against the United States, or any claim for the loss or emancipation of any slave; but all such debts, obligations and claims shall be held illegal and void.” This basically states that if a person had bonds from the United States and/or Union, the bonds would be honored by the U.S. government. If a person held Confederate bonds, they would be worthless. Southerners who held both Confederate bonds and enslaved people would not recover this wealth. Thus, claims by former slaveholders requesting compensation for slave property had no standing. Any state that ratified the Fourteenth Amendment would automatically be readmitted. Yet, all former Confederate states refused to ratify the amendment in 1866.

This video summarizes how the 14th amendment gave citizenship to the formerly enslaved.

You can view the transcript for “The Fourteenth Amendment” here (opens in new window).

“Swing Around the Circle”

President Johnson called openly for the rejection of the Fourteenth Amendment, a move that drove a further wedge between him and congressional Republicans. In late summer of 1866, he gave a series of speeches, known as the “swing around the circle,” designed to gather support for his mild version of Reconstruction. Johnson felt that ending slavery went far enough; extending the rights and protections of citizenship to freed people, he believed, went much too far. He continued to believe that Blacks were inferior to Whites. The president’s “swing around the circle” speeches to gain support for his program and derail the Radical Republicans proved to be a disaster, as hecklers provoked Johnson to make damaging statements. Radical Republicans charged that Johnson had been drunk when he made his speeches. As a result, Johnson’s reputation plummeted.

Recall that Johnson, a former Democrat from Tennessee, was chosen as Lincoln’s vice presidential candidate because his presence appeased Southern sympathizers who desired a quick peace process. Johnson, however, fought constantly with the Republican majority in Congress. One of their major disagreements was over the federal government’s role in promoting social, political, and economic equality for the formerly enslaved and other Black people. On March 27, 1866, in a message to Congress regarding their proposed civil rights legislation, Johnson explained his constitutional concerns about the bill. In the end, Johnson refused to sign the bill because he believed Congress had no right to guarantee citizenship within the states or to enforce legislation on the individual states. In addition, he challenged the portions of the law that guaranteed full social, political, and economic equality for freedmen by challenging their fitness to vote and become fully functioning members of society. This bill, the Civil Rights Act of 1866, was intended to clarify and support the policies set forth in the 13th and 14th amendments. Even though Johnson vetoed the bill, Congress overrode his veto, marking the first time that the U.S. Congress ever overrode a presidential veto for a major piece of legislation.

President Johnson’s Veto of the Civil Rights Act of 1866

Andrew Johnson is considered one of the worst-ever American Presidents. This CBS video examines some of his life and legacy.