What you’ll learn to do: explain the phase of radical Reconstruction, President Johnson’s impeachment, and the development of the Fifteenth Amendment 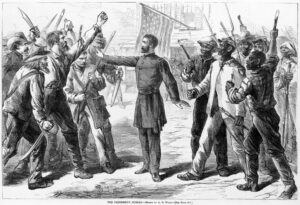 Though President Johnson declared Reconstruction complete less than a year after the Confederate surrender, members of Congress disagreed. Republicans in Congress began to implement their own plan of bringing law and order to the South through the use of military force and martial law. Radical Republicans who advocated for a more equal society pushed their program forward as well, leading to the ratification of the Fifteenth Amendment, which finally gave Black men the right to vote. The new amendment empowered Black voters, who made good use of the vote to elect Black politicians. It disappointed female suffragists, however, who had labored for years to gain women’s right to vote. By the end of 1870, all the Southern states under Union military control had satisfied the requirements of Congress and been readmitted to the Union.