The Reconstruction Acts and Johnson’s Impeachment

During the Congressional election in the fall of 1866, Republicans gained even greater victories. This was due in large measure to the northern voter opposition that had developed toward President Johnson because of the inflexible and overbearing attitude he had exhibited in the White House, as well as his missteps during his 1866 “Swing Around the Circle” speaking tour. Leading Radical Republicans in Congress included Massachusetts senator Charles Sumner (the same senator whom proslavery South Carolina representative Preston Brooks had thrashed with his cane in 1856 during the Bleeding Kansas crisis) and Pennsylvania representative Thaddeus Stevens. These men and their supporters, who were the Radical Republicans, envisioned a much more expansive change in the South. Sumner advocated integrating schools and giving Black men the right to vote while disenfranchising many Southern voters. For his part, Stevens considered that the Southern states had forfeited their rights as states when they seceded, and were no more than conquered territory that the federal government could organize as it wished. He envisioned the redistribution of plantation lands (similar to Sherman’s “Forty Acres and a Mule” proposition) and U.S. military control over the former Confederacy.

Their goals included the transformation of the South from an area built on slave labor to a free-labor society. They also wanted to ensure that freed people were protected and given the opportunity for a better life. Violent race riots in Memphis, Tennessee, and New Orleans, Louisiana, in 1866 gave greater urgency to the second phase of Reconstruction, begun in 1867.

The 1867 Military Reconstruction Act, which encompassed the vision of Radical Republicans, set a new direction for Reconstruction in the South. Republicans saw this law, and three supplementary laws passed by Congress that year, called the Reconstruction Acts, as a way to deal with the disorder in the South. The 1867 act divided the ten Southern states that had yet to ratify the Fourteenth Amendment into five military districts (Tennessee had already been readmitted to the Union by this time and so was excluded from these acts). Martial law was imposed, and a Union general commanded each district. These generals and twenty thousand federal troops stationed in the districts were charged with protecting freed people. When a supplementary act extended the right to vote to all freed men of voting age (21 years old), the military in each district oversaw the elections and the registration of voters. Only after new state constitutions had been written and states had ratified the Fourteenth Amendment could these states rejoin the Union. Predictably, President Johnson vetoed the Reconstruction Acts, viewing them as both unnecessary and unconstitutional. Once again, Congress overrode Johnson’s vetoes, and by the end of 1870, all the Southern states under military rule had ratified the Fourteenth Amendment and been restored to the Union.

The Impeachment of President Johnson

President Johnson’s relentless vetoing of congressional measures created a deep rift in Washington, DC, and neither he nor Congress would back down. Johnson’s prickly personality proved to be a liability, and many people found him grating. Moreover, he firmly believed in White supremacy, declaring in his 1868 State of the Union address, “The attempt to place the White population under the domination of persons of color in the South has impaired, if not destroyed, the kindly relations that had previously existed between them; and mutual distrust has engendered a feeling of animosity which leading in some instances to collision and bloodshed, has prevented that cooperation between the two races so essential to the success of industrial enterprise in the southern states.” The president’s racism put him even further at odds with those in Congress who wanted to create full equality between Blacks and Whites. 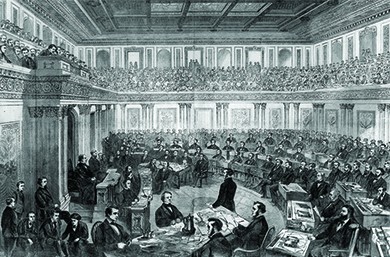 Figure 2. This illustration by Theodore R. Davis, which was captioned “The Senate as a court of impeachment for the trial of Andrew Johnson,” appeared in Harper’s Weekly in 1868. Here, the House of Representatives brings its grievances against Johnson to the Senate during impeachment hearings.

Command of the Army Act and Tenure of Office Act

The Republican majority in Congress by now despised the president, and they wanted to prevent him from interfering in congressional Reconstruction. To that end, Radical Republicans passed two laws of dubious constitutionality. The Command of the Army Act prohibited the president from issuing military orders except through the commanding general of the army, who could not be relieved or reassigned without the consent of the Senate. The Tenure of Office Act, which Congress passed in 1867, required the president to gain the approval of the Senate whenever he appointed or removed officials. The Senate believed that since they gave their approval for ratification of appointments, they should be able to ratify the dismissal of these same appointments. Congress had passed this act to ensure that Republicans who favored Radical Reconstruction would not be barred or stripped of their jobs. In August 1867, President Johnson removed Secretary of War Edwin M. Stanton, who had aligned himself with the Radical Republicans, without gaining Senate approval. He replaced Stanton with Ulysses S. Grant, but Grant resigned and sided with the Republicans against the president. Many Radical Republicans welcomed this blunder by the president as it allowed them to take action to remove Johnson from office, arguing that Johnson had openly violated the Tenure of Office Act. The House of Representatives quickly drafted a resolution to impeach him, a first in American history.

In impeachment proceedings, the House of Representatives serves as the prosecution and the Senate acts as judge, deciding whether the president should be removed from office. The House brought eleven counts against Johnson, all alleging his encroachment on the powers of Congress. In the Senate, Johnson barely survived. Seven Republicans joined the Democrats and independents to support acquittal; the final vote was 35 to 19, one vote short of the required two-thirds majority. The Radicals then dropped the impeachment effort, but the events had effectively silenced President Johnson, and Radical Republicans continued with their plan to reconstruct the South.

Three United States presidents have been impeached, although none were convicted: Andrew Johnson in 1868, Bill Clinton in 1998, and Donald Trump two times in both 2019 and 2021. Richard Nixon resigned as a result of the Watergate Scandal in 1974, after the House Judiciary Committee passed articles of impeachment but before the House could vote to impeach.

President Clinton was impeached for perjury and obstruction of justice in part because of allegations that he lied under oath when being investigated in the Clinton–Lewinsky scandal.

President Trump was first impeached for charges of abuse of power and obstruction of Congress related to pressuring a foreign government (Ukraine) to interfere on Trump’s behalf prior to the 2020 election. Trump was impeached a second time after he was accused of inciting a deadly insurrection against the United States by attempting to overturn the 2020 presidential election results after his loss to Joe Biden.

The story of President Johnson’s impeachment is explained in this video.

You can view the transcript for “History of Impeachment – Trial of President Johnson” here (opens in new window).

Command of the Army Act: prohibited the President from issuing military orders, except through the commanding general of the Army, who could not be relieved or reassigned without the consent of the Senate

Reconstruction Acts: created to deal with disorder in the South

Tenure of Office Act: required the President to gain the approval of the Senate whenever he appointed or removed officials