The 17th-18th century Wars for Empire (1689-1763) solidified the links between the European and North American components of the British Empire. Great Britain fought four separate wars against French Imperial and colonial forces for control of portions of modern-day Canada and the Ohio Valley. The War of Jenkins’ Ear (1739-1748), pitted Britain against Spain in North America. These conflicts for control of North America also forced colonists to forge alliances or establish enmity with Native Americans, as different tribes aligned themselves with embattled European powers.

Figure 1. A timeline showing the major conflicts during the Wars for Empire.

Generations of British colonists grew up when North America, especially the Northeast, was embroiled in one war or another. In the eighteenth century, fighting was seasonal. Armies mobilized in the spring, fought in the summer, and retired to winter quarters in the fall. The British army imposed harsh discipline on its soldiers, who were typically drawn from the poorer classes, to ensure they did not step out of line during engagements. If they did, they were severely punished, humiliated, or killed (for more serious offenses such as multiple desertions). On the battlefield, armies dressed in bright uniforms to advertise their bravery and lack of fear. They stood in tight formation and exchanged volleys with the enemy.[1]

Most imperial conflicts had both North American and European fronts, often resulting in two names for each war. For instance, the North American conflict known as King William’s War (1688–1697) was an extension of the European War of the League of Augsburg, or the War of the Grand Alliance, or Nine Year’s War. In America, the bulk of the fighting in this conflict took place between New England and New France (modern-day Quebec, Canada, parts of New England, and the Great Lakes area). That particular war proved inconclusive, with no clear victor.

This video explains some of the tensions between the British, French, and Native Americans during King William’s War and Queen Anne’s War.

Queen Anne’s War (1702–1713), known as the War of Spanish Succession in Europe, saw England battling both Spain and France over who would ascend the Spanish throne after the last of the Hapsburg rulers of Spain, Charles II, died without an heir. In North America, the fighting took place in Florida, New England, and New France. The Treaty of Utrecht ended the war in 1713, following a preliminary peace in 1712. France ceded the territories of Hudson Bay, Acadia, and Newfoundland to Britain while retaining Cape Breton Island and other islands in the Gulf of St. Lawrence. The victory for the English was again not decisive because they failed to take Quebec, which would have given them control of New France since it was the capital. Some terms were ambiguous in the treaty, and the concerns of various Native tribes were not included, thereby setting the stage for future conflicts, including Dummer’s War (1722-1725), in which the British in New England fought against the Wabanaki Confederacy, who were allied with the French.

Queen Anne’s War is best remembered in the United States for the raid against Deerfield, Massachusetts in 1704. A small French force, allied with a Native American division made up of Catholic Mohawks and Pocumtucs (modern-day Pocumtuc descendants have been subsumed into the Abenaki tribe), attacked the British outpost of Deerfield, killing scores of English colonists and taking 112 prisoners. Among the captives was the seven-year-old Eunice Williams, the daughter of Deerfield’s minister John Williams. She lived with the Mohawks for years and became assimilated into the tribe while her family tried to find her. To the horror of the Puritan leaders, when she grew up Eunice married a Mohawk man and refused to return to New England.

Clifton Johnson, an American author and photographer, published An Unredeemed Captive, the story of Eunice Williams in 1897.[2]

The North American War of Jenkins’ Ear (1739–1742) centered on the possession of Georgia and trade with the interior colonies. The conflict arose between over contested claims by both Britain and Spain to the land occupied by the new colony. The war got its name from an incident in 1731 in which a Spanish Coast Guard captain severed the ear of British captain Robert Jenkins as retribution for raiding Spanish ships in Panama. Jenkins fueled the growing animosity between England and Spain by presenting his ear to Parliament and stirring up British public outrage. The War of Jenkins’ Ear disrupted Atlantic trade routes, which hurt both Spain and Britain and was a major reason the war ended in 1742. Georgia, founded six years earlier, remained British and worked as an effective buffer against Spanish-controlled Florida.

This video explains the War of Jenkin’s Ear and its connection to the larger conflicts between the British, Spanish, and then the French. 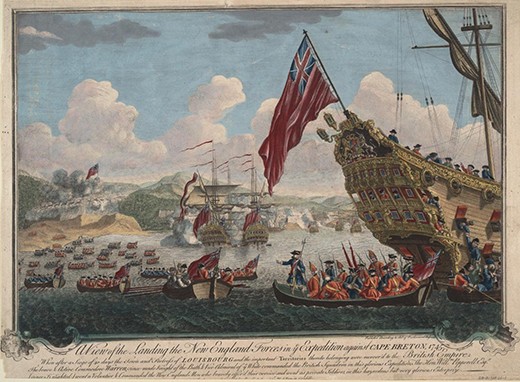 Figure 3. In this 1747 painting by J. Stevens, View of the landing of the New England forces in ye expedition against Cape Breton, British forces land on the island of Cape Breton to capture Fort Louisbourg.

The War of the Austrian Succession, nominally a struggle over the legitimacy of the accession of Maria Theresa to the Austrian throne, began in 1740, but at first did not involve either Britain or Spain militarily. Britain was drawn diplomatically into that conflict in 1742 as an ally of Austria and an opponent of France and Prussia, but open hostilities between them did not take place until 1743. War was not formally declared between Britain and France until March 1744 and Massachusetts did not declare war against Quebec and France until June 2.

The war took place primarily in the British provinces of New York, Massachusetts Bay (which included Maine as well as Massachusetts at the time), New Hampshire (which included Vermont at the time), and Nova Scotia. Its most significant action was an expedition organized by Massachusetts Governor William Shirley that besieged and ultimately captured the French fortress of Louisbourg, on Cape Breton Island in Nova Scotia, in 1745. However, three years later the war ended under the terms of the Treaty of Aix-la-Chapelle and Britain relinquished control of the fortress to the French. King George’s War once again, the war resulted in an incomplete victory for both Britain and France. The war took a heavy toll, especially in the northern British colonies. The losses of Massachusetts men alone in 1745–46 have been estimated as 8% of that colony’s adult male population. The peace treaty, which restored all colonial borders to their pre-war status, did little to end the lingering enmity between France, Britain, and their respective colonies, nor did it resolve any territorial disputes.

The final conflict of the Wars for Empire, the French and Indian War (1754–1763), known as the Seven Years’ War in Europe, would prove to be the decisive contest between Britain and France in North America. All of these North American conflicts between the English and French are sometimes together referred to as the First, Second, Third, and Fourth French and Indian Wars. To review, the North American wars, and their associated European wars, in sequence, are:

Hapsburgs: A royal house founded in 11th century Swabia, in present-day Germany. The Hapsburg family held the throne of the Holy Roman Empire from 1440 until 1740 and then again from 1765 to its final dissolution in 1806. The Hapsburgs married into almost every other royal family in Europe and their line still exists today in Karl von Habsburg, an Austrian politician, who is the son of the last Crown Prince of Austria.

King George’s War: (1744–1748), known in Europe as the War of Austrian Succession, and the third of four French and Indian Wars fought between the French and the British. It took place mostly in the New England colonies.

King William’s War: (1688–1697) an extension of the European War of the League of Augsburg, or the Nine Year’s War, found primarily between France and a European coalition including the Holy Roman Empire (led by the Habsburg Monarchy), the Dutch Republic, England, Spain, Savoy, and Portugal. In North America, King William’s War was largely caused by the fact that the treaties and agreements that were reached at the end of King Philip’s War (1675–1678) were not adhered to.

Mohawks: An Iroquois-speaking tribe of the Northeastern U.S. and Southeastern Canada. They lived mostly in upstate New York along the Hudson River. The first Native American Catholic saint, Kateri Tekakwitha, came from the Mohawk tribe, many of whom converted to Catholicism. The Mohawks were split during the French and Indian War, with some supporting the British and some supporting the French.

New France: French colonial territory in North America. In 1645, New France consisted of most of Eastern Canada, the area around the Great Lakes, and the Ohio Valley. By 1745 it had expanded south along the Mississippi River to Louisiana.

Queen Anne’s War (1702–1713): the American theater of the War of the Spanish Succession in which France and Spain fought against the English, Dutch, and the Holy Roman Empire. In America, fighting happened around Florida, New England, and New France and resulted in France ceding some territories in Hudson Bay, Acadia, and Newfoundland.

War of Jenkins’ Ear (1739–1742): a war fought between Britain and Spain over access to trade and control of the markets in the Caribbean and Georgia.