California and the Gold Rush 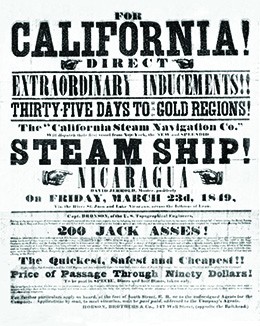 Figure 1. Word about the discovery of gold in California in 1848 quickly spread and thousands soon made their way to the West Coast in search of quick riches.

After the Mexican-American War, the United States had no way of knowing that part of the land just ceded by Mexico would become far more valuable than anyone could have imagined. On January 24, 1848, a man named James Marshall discovered gold in the millrace (an artificial channel that carries water to power the mill wheel) of the sawmill he had built with his partner John Sutter on California’s American River. Word quickly spread, and within a few weeks, all of Sutter’s employees had left to search for gold. When the news reached San Francisco, most of its inhabitants abandoned the town and headed for the American River. By the end of the year, thousands of California’s residents had gone north to the goldfields with visions of wealth in their heads. In 1849, thousands of people from around the world began to follow and the California Gold Rush had begun.

The fantasy of instant wealth caused a massive influx of people to California. Settlers in Oregon and Utah rushed south and west to the American River; Americans living on the East Coast sailed around the southern tip of South America or to Panama’s Atlantic coast, where they crossed the Isthmus of Panama to the Pacific and booked ship’s passage north to San Francisco. Easterners who could not afford to sail to California crossed the continent on foot, on horseback, or in wagons. As California-bound vessels stopped in South American ports to take on food and fresh water, hundreds of Peruvian and Chilean immigrants streamed aboard. Others journeyed from as far away as Hawaii and Europe. Chinese immigrants came across the Pacific as well, adding to the polyglot population in the California Gold Rush boomtowns.

Life in a Boomtown

Once in California, hopeful miners gathered in camps with names like Drunkard’s Bar, Angel’s Camp, Gouge Eye, and Whiskeytown, but the so-called “Forty-Niners” (because they arrived in 1849) did not find wealth so easy to come by as they had first imagined. Although some were able to find gold by panning for it or shoveling soil from river bottoms into sieve-like contraptions called rockers, most did not. The placer gold that had been washed down the mountains into streams and rivers was quickly exhausted, and what remained was buried deep below ground. Independent miners were supplanted by companies that could afford to purchase hydraulic mining technology and hire laborers to work the hills. The frustration of many miners was expressed in the words of one unlucky prospector named Sullivan Osborne. In 1857, Osborne wrote in his personal diary that he had arrived in California “full of high hopes and bright anticipations of the future” only to find his dreams “have long since perished” and that during his time in California he had “lived and fared like a dog.”[1] Although $550 million worth of gold was found in California between 1849 and 1850, very little of it went to individuals, since they could not compete with the efficiency and resources of large corporations.

Men like Sullivan Osborne lived rough lives in the mining camps and boomtowns of the Gold Rush. Since people arrived so quickly, most lived in makeshift wooden homes, tents, or even old ships which had been pulled ashore. There was very little formal infrastructure and almost no sanitation, so diseases like dysentery and cholera were rampant amongst the miners. The rainy California autumn caused mudslides and floods, while the harsh winters in the mountains resulting in frostbite and death of men and pack mules. The miners had to contend not only with weather and Native American tribes but also with wildlife like coyotes and grizzly bears, who would regularly steal food or kill livestock or men. Mining accidents, like tunnel collapses, were common. At night, men gathered in the camps to gamble and drink, which often resulted in fights or violence.

Women also made their way to California during the Gold Rush. Some accompanied their husbands or fathers in order to look after the camp and cook meals, but some went west alone to try and carve out their own fortune from the money being made by the miners. They worked as dancers, entertainers, maids, store clerks, cooks, seamstresses, laundresses, and most often prostitutes. Some women were able to open businesses like taverns or brothels and make their own independent money, especially after the California Constitution of 1850 allowed women, even married ones, to own and manage their own property.

All of these challenges awaited those who actually managed to make it to California in the first place. Many travelers died on the trails from weather, disease, conflicts with Native Americans, and starvation, such as the ill-fated and infamous Donner Party.

Gender and sexuality During the gold rush

Figure 3. This 1891 etching by Andre Castaigne imagines a men-only ball during the 1849 California Gold rush.

Due to the unique environment of California during the Gold Rush, a counter-culture evolved which subverted the traditional gender roles of the tightly-laced East Coast. Because of the dearth of women in mining camps and boomtowns, men took on some of their traditional roles as cooks, cleaners, and even prostitutes. Certain areas of San Francisco became hotbeds for many of the vices adopted by miners, such as drinking and gambling. These areas also catered to those miners who sought out male companionship. During public dances, some men would tie handkerchiefs to their arms to indicate that they would take the female role while dancing. The idea of the “third sex,” men who dressed and behaved like women and had sex with other men, became commonly accepted in urban areas where law enforcement generally ignored these and other “moral” transgressions.[2]

Women too found some freedom of gender expression in California. Harry Allen, a notorious California bootlegger and criminal, was assigned female at birth, but refused to wear women’s clothing and was famous for seducing women across the Pacific Northwest. There were also women who came west and took on a male persona in order to protect themselves or earn higher wages, such as Jeanne Bonnet, who was arrested for dressing like a man in San Francisco and claimed that it was because she couldn’t do her job (frog-catching) in a dress, and the 80-year-old lumberjack Sammy Williams who was only discovered to be female after death.

The west coast became a place for crossing all types of social boundaries. Racial and social lines became blurred in this new society and places like San Francisco became magnets for those who wished to live a lifestyle that might clash with the strict social boundaries of the East. Because of this, modern-day San Francisco is a haven for the LGBTQ+ community and has deep roots in the community, going back much further than many understand.[3]

The largest of the Gold Rush boomtowns was San Francisco, which counted only a few hundred residents in 1846 but by 1850 had reached a population of 34,000. So quickly did the territory grow that by 1850 California was ready to enter the Union as a state. When it sought admission, however, the issue of slavery expansion and sectional tensions emerged once again.

When California was set to be admitted as a free state in 1850, it set off tensions in Washington DC over the status of slavery in the territories acquired as a result of the Mexican Cession. In order to solve the issue of slavery, as well as the issue of territorial borders, Congress brokered the Compromise of 1850. This group of bills established the northwest border of Texas essentially where we know it today, established the New Mexico and Utah Territories (which would decide the issue of slavery by popular sovereignty), banned the slave trade in Washington DC, and adopted a more stringent Fugitive Slave Act in the free states and territories. The Compromise of 1850 (which will be covered in more detail later in this module), was essentially a concession to Southerners who were embittered over the admission of California as a free state, as well as the idea that new territories could decide the slavery issue by popular vote.

While moving west and striking it rich had its appeal for many, western expansion was devastating for the people who already lived in those areas. Click through these slides to learn more about the displacement of Indigenous tribes and to review some of the causes and effects of western expansion.

Compromise of 1850: the U.S. government’s series of laws which tried to balance out the admission of California as a free state with the creation of two new territories and a harsh new Fugitive Slave Act

forty-niners: the nickname for those who traveled to California in 1849 in hopes of finding gold

placer gold: trace amounts of gold that are washed downstream from the vein and settle into deposits on a riverbed