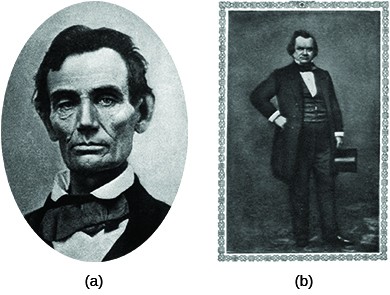 Figure 1. In 1858, Abraham Lincoln (a) debated Stephen Douglas (b) seven times in the Illinois race for the U.S. Senate. Although Douglas won the seat, the debates propelled Lincoln into the national political spotlight.

The turmoil in Kansas, combined with the furor over the Dred Scott decision, provided the background for the 1858 senatorial contest in Illinois between Democratic senator Stephen Douglas and Republican hopeful Abraham Lincoln. Lincoln and Douglas engaged in seven debates before huge crowds that met to hear the two men argue the central issue of slavery and its expansion. Newspapers throughout the United States published their speeches. Whereas Douglas already enjoyed national recognition, Lincoln remained largely unknown outside of Illinois before the debates. These appearances provided an opportunity for him to raise his profile with both northerners and southerners.

Douglas denigrated the Republican Party as an abolitionist effort—one that even favored miscegenation, or race-mixing through sexual relations or marriage. The “Black Republicans,” Douglas declared, posed a dangerous threat to the Constitution. Indeed, because Lincoln declared the nation could not survive if the slave state–free state division continued, Douglas claimed the Republicans aimed to destroy what the founders had created.

On August 21, 1858, Abraham Lincoln and Stephen Douglas met in Ottawa, Illinois, for the first of seven debates. People streamed into Ottawa from neighboring counties and from as far away as Chicago. Reporting on the event was strictly partisan, with each of the candidates’ supporters claiming victory for their candidate. In this excerpt, Lincoln addresses the issues of equality between Black people and White people.

How would you characterize Lincoln’s position on equality between Black people and White people? Might there be a tactical reason for framing his position in this way?

During the debates, Lincoln demanded that Douglas explain whether or not he believed that the 1857 Supreme Court decision in the Dred Scott case trumped the right of a majority to prevent the expansion of slavery under the principle of popular sovereignty. Douglas responded to Lincoln during the second debate at Freeport, Illinois. In what became known as the Freeport Doctrine, Douglas adamantly upheld popular sovereignty, declaring: “It matters not what way the Supreme Court may hereafter decide as to the abstract question whether slavery may or may not go into a territory under the Constitution, the people have the lawful means to introduce it or exclude it as they please.” The Freeport Doctrine antagonized southerners who supported slavery, since it raised the possibility that slavery might not extend into the territories, and caused a major rift in the Democratic Party. The doctrine did help Douglas in Illinois, however, where most voters opposed the further expansion of slavery even as many had no great love for Black Americans.

The Illinois legislature selected Douglas over Lincoln for the senate, but the debates had the effect of launching Lincoln into the national spotlight. (Voters did not directly elect senators until the passage of the Seventeenth Amendment to the Constitution in 1913.) Lincoln had argued that slavery was morally wrong, even as he accepted elements of the racism inherent in slavery. He warned that Douglas and the Democrats would nationalize slavery through the policy of popular sovereignty. Though Douglas had survived the senate election challenge from Lincoln, his Freeport Doctrine damaged the political support he needed from the Southern Democrats. This contributed to his defeat in the following presidential election, and undermined the Democratic Party as a national force.

To get a feel for what the debates might have looked like in real life, watch this 1940 dramatization of the Lincoln-Douglas debates. This video from teacher Jared Bruning also provides more context to help understand the nature of the debates.

Freeport Doctrine: a doctrine that emerged during the Lincoln-Douglas debates in which Douglas reaffirmed his commitment to popular sovereignty, including the right to halt the spread of slavery, despite the 1857 Dred Scott decision affirming slaveholders’ right to bring their property wherever they wished