Heading into 1863, the war in the west continued in favor of the North. At the start of the year, Union forces controlled much of the Mississippi River. In the spring and summer of 1862, they had captured Memphis and New Orleans—the most important port in the Confederacy, through which cotton harvested from all the Southern states was exported. Grant had then attempted to capture Vicksburg, Mississippi, a commercial center on the bluffs above the Mississippi River. Once Vicksburg fell, the Union would have won complete control over the river. This would not only block the main waterway of the Confederacy but also sever its western region from its southern states. A military bombardment that summer failed to force a Confederate surrender. An assault by land forces also failed in December 1862. 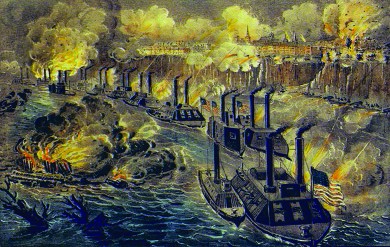 Figure 1. In this illustration, Union gun boats fire on Vicksburg in the campaign that helped the Union take control of the Mississippi River.

In April 1863, the Union began a final attempt to capture Vicksburg. On July 3, after more than a month of a Union siege, during which Vicksburg’s residents hid in caves to protect themselves from the bombardment and ate their pets to stay alive, Grant finally achieved his objective. The trapped Confederate forces surrendered. The Union had succeeded in capturing Vicksburg and splitting the Confederacy. This victory inflicted a serious blow to the Southern war effort.

As Grant and his forces pounded Vicksburg, Confederate strategists, at the urging of General Lee, decided on a bold plan to invade the North. Lee had just defeated a larger Union army at Chancellorsville in May. Leaders hoped this new invasion would force the Union to send troops engaged in the Vicksburg campaign east, thus weakening their power over the Mississippi. Further, they hoped the aggressive action of pushing north would weaken the Union’s resolve to fight. Lee also hoped that a significant Confederate victory in the North would convince Great Britain and France to extend support to Jefferson Davis’s government and encourage the North to negotiate peace.

This video explains why the Battle of Vicksburg was a key victory for the North.

You can view the transcript for this segmented clip of “Here’s Why the Battle of Vicksburg Was So Important” here (opens in new window).

Beginning in June 1863, General Lee began to move the Army of Northern Virginia north through Maryland. The Union army—the Army of the Potomac—traveled east to end up alongside the Confederate forces. The two armies met at Gettysburg, Pennsylvania, where Confederate forces had gone to secure supplies. The resulting battle lasted three days, July 1–3 and remains the biggest and costliest battle ever fought in North America. 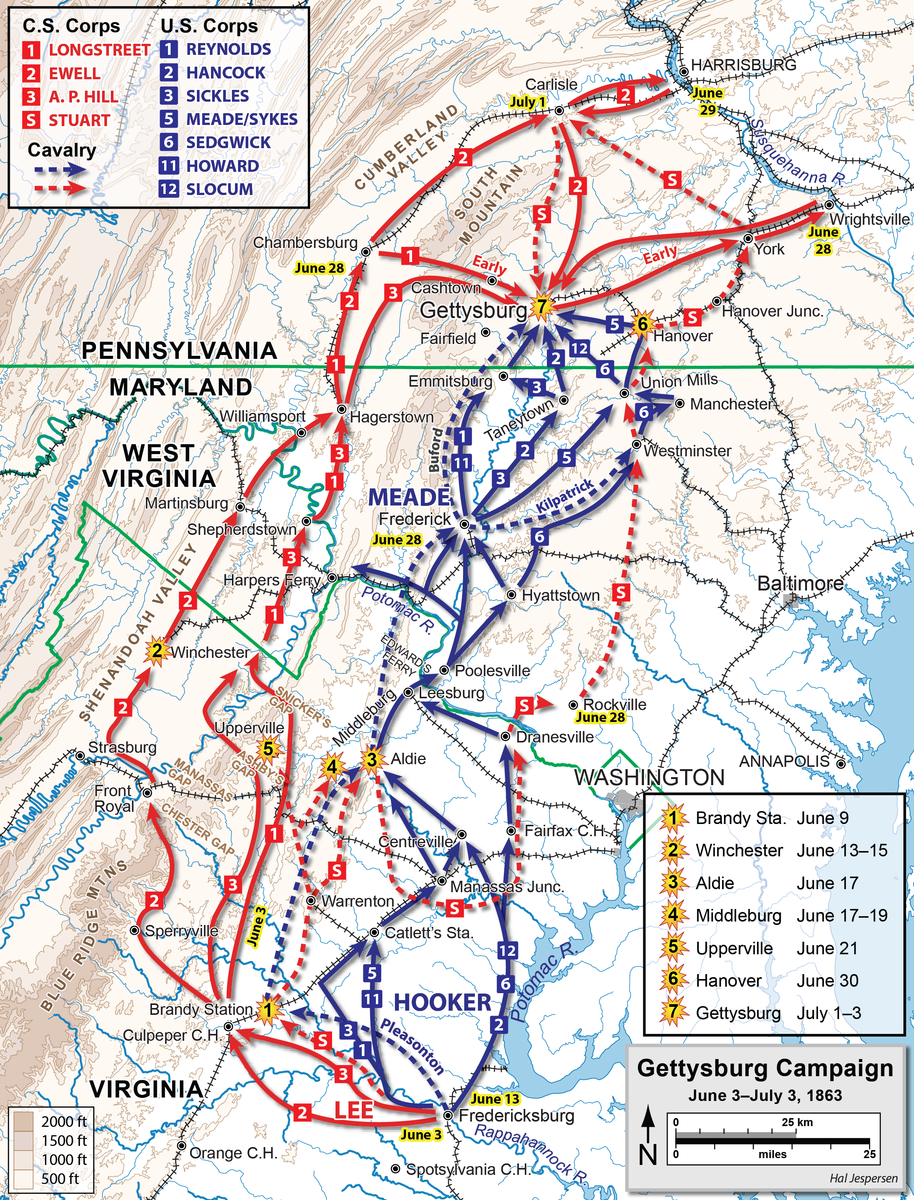 Figure 2. As this map indicates, there were several smaller battles leading up to the battle at Gettysburg, which was the farthest north that the Confederate army advanced.

The climax of the Battle of Gettysburg occurred on the third day. In the morning, after a fight lasting several hours, Union forces fought back a Confederate attack on Culp’s Hill, one of the Union’s defensive positions. To regain a perceived advantage and secure victory, Lee ordered a frontal assault, known as Pickett’s Charge (for Confederate general George Pickett), against the center of the Union lines on Cemetery Ridge. Approximately fifteen thousand Confederate soldiers took part, and more than half lost their lives, as they advanced nearly a mile across an open field to attack the entrenched Union forces. In all, more than a third of the Army of Northern Virginia had been lost that day. On the evening of July 4, Lee and his men slipped away in the rain. Union leader General George Meade did not pursue them. Both sides suffered staggering losses. Total casualties numbered around twenty-three thousand for the Union and some twenty-eight thousand among the Confederates. With its defeats at Gettysburg and Vicksburg, both on the same day, the Confederacy lost its momentum. The tide had turned in favor of the Union in both the east and the west.

Click through this activity to better understand the scale and significance of the Battle of Gettysburg.

Following the Battle of Gettysburg, the bodies of those who had fallen were hastily buried. Attorney David Wills, a resident of Gettysburg, campaigned for the creation of a national cemetery on the site of the battlefield, and the governor of Pennsylvania tasked him with creating it. President Lincoln was invited to attend the cemetery’s dedication. He stayed as a guest in Wills’ home where he penned a speech the day before the dedication. After the featured orator had delivered a two-hour speech, Lincoln addressed the crowd for only two minutes. In his speech, Lincoln invoked the Founding Fathers and the spirit of the American Revolution. The Union soldiers who had died at Gettysburg, he proclaimed, had died not only to preserve the Union, but also to guarantee freedom and equality for all. His short yet powerful oration came to be known as the Gettysburg Address.

Several months after the battle at Gettysburg, Lincoln traveled to Pennsylvania to speak at the dedication of the new Soldiers’ National Ceremony near the site of the battle. There he delivered his now-famous Gettysburg Address to commemorate the turning point of the war and the soldiers whose sacrifices had made it possible. The two-minute speech was politely received at the time, although press reactions split along party lines. Upon receiving a letter of congratulations from Massachusetts politician and orator William Everett, whose speech at the ceremony had lasted for two hours, Lincoln said he was glad to know that his brief address, now virtually immortal, was not “a total failure.”

Four score and seven years ago our fathers brought forth on this continent, a new nation, conceived in Liberty, and dedicated to the proposition that all men are created equal.

Now we are engaged in a great civil war, testing whether that nation, or any nation so conceived and so dedicated, can long endure. We are met on a great battle-field of that war. We have come to dedicate a portion of that field, as a final resting place for those who here gave their lives that that nation might live. It is altogether fitting and proper that we should do this.

It is for us the living . . . to be here dedicated to the great task remaining before us—that from these honored dead we take increased devotion to that cause for which they gave the last full measure of devotion—that we here highly resolve that these dead shall not have died in vain—that this nation, under God, shall have a new birth of freedom—and that government of the people, by the people, for the people, shall not perish from the earth.

What did Lincoln mean by “a new birth of freedom”? What did he mean when he said “a government of the people, by the people, for the people, shall not perish from the earth”?

This video highlights the significance of the Gettysburg Address.

You can view the transcript for “The Civil War in Color: Lincoln’s Gettysburg Address | History” here (opens in new window).

The Address remains significant, even today. Acclaimed filmmaker Ken Burns has created a documentary about a small boys’ school in Vermont where students memorize the Gettysburg Address. It explores the value the address has in these boys’ lives, and why the words still matter. You can watch the preview here.

Battle of Gettysburg: a three-day battle, July 1-3, 1863, in Pennsylvania. Though costly to both sides in terms of causalities, the Union victory here as well as at Vicksburg on the same day was the beginning of the end for the Confederacy.

Battle of Vicksburg: July 3, 1863 confrontation in Mississippi, with the Union emerging victorious. Vicksburg was the last remaining Confederate stronghold along the Mississippi River. Once the Union captured they gained control of that key waterway.

Gettysburg Address: a speech by Abraham Lincoln dedicating the military cemetery at Gettysburg on November 19, 1863