Introduction to the End of the Civil War

What you’ll learn to do: describe the end of the Civil War 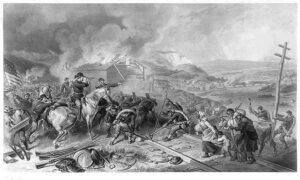 Having failed to win the support it expected from either Great Britain or France, the Confederacy faced a long war with limited resources and no allies. Lincoln won reelection in 1864, and continued to pursue the Union campaign, not only in the east and west, but also with a drive into the South. Under the leadership of General Sherman, the Union attacked the heart of the South. Sherman’s March to the Sea through Georgia destroyed everything in its path. Cut off and outnumbered, Confederate general Lee surrendered to Union general Grant on April 9 at Appomattox Court House in Virginia. Within days of Lee’s surrender, Confederate troops lay down their arms, and the devastating war came to a close.