By the outset of 1864, after three years of war, the Union had mobilized its resources for an ongoing struggle on a massive scale. The government had overseen the construction of new railroad lines and for the first time used standardized rail tracks that allowed the North to move men and materials with greater ease. The North’s economy had shifted to a wartime model. The Confederacy also mobilized, perhaps to a greater degree than the Union, with its focus on securing independence and maintaining slavery. Yet the Confederacy experienced ever-greater hardships after years of war. Without the population of the North, it faced a shortage of manpower. The lack of industry, compared to the North, undercut the ability to sustain and wage war. Rampant inflation and food shortages in the South lowered morale. The Confederacy had also held out hope for foreign intervention, but by 1864 this possibility had dissipated.

The Relationship With Europe

Foreign countries, primarily in Europe, had watched the unfolding war with deep interest. The United States represented the greatest example of democratic thought at the time, and individuals from as far afield as Britain, France, Spain, Russia, and beyond closely followed events across the Atlantic Ocean. If the democratic experiment within the United States failed, many democratic activists in Europe wondered what hope might exist for such experiments elsewhere. Conversely, those with close ties to the cotton industry watched with other concerns. War meant the possibility of disrupting the cotton supply, and disruption could have catastrophic ramifications in commercial and financial markets abroad.

From the beginning of the war, the Confederacy placed great hope in being recognized and supported by Great Britain and France. European intervention in the conflict remained a strong possibility, but when it did occur, it was not in a way anticipated by either the Confederacy or the Union.

Napoleon III of France believed the Civil War presented an opportunity for him to restore a French empire in the Americas. With the United States preoccupied, the time seemed ripe for action. Napoleon’s target was Mexico, and in 1861, a large French fleet took Veracruz. The French then moved to capture Mexico City, but Mexican forces defeated the French in 1862. Despite this setback, France eventually did conquer Mexico, establishing a regime that lasted until 1867. Rather than coming to the aid of the Confederacy, France used the Civil War to provide a pretext for efforts to reestablish its former eighteenth-century colonial holdings.

Still, the Confederacy had great confidence that it would find an ally in Great Britain despite the antislavery sentiment there. Southerners hoped Britain’s dependence on cotton for its textile mills would keep the country on their side. The fact that the British proved willing to build and sell ironclad ships intended to smash through the Union naval blockade further raised Southern hopes. The Confederacy purchased two of these armored blockade runners, the CSS Florida and the CSS Alabama. Both were destroyed during the war.

The Confederacy’s staunch commitment to slavery eventually worked against British recognition and support, since Great Britain had abolished slavery in 1833. The 1863 Emancipation Proclamation ended any doubts that the British had about the goals of the Union cause. In the aftermath of the proclamation, many in Great Britain cheered for a Union victory. Ultimately, Great Britain, like France, disappointed the Confederacy’s hope of an alliance, leaving the outnumbered and out-resourced states that had left the Union to fend for themselves.

In this part two video, you’ll learn more about the later conflicts and the long-term outcomes of the Civil War.

You can view the transcript for “The Civil War Part 2: Crash Course US History #21” here (opens in new window).

In the final years of the war, the Union continued its efforts on both the eastern and western fronts while bringing the war into the Deep South. Union forces increasingly engaged in total war, not distinguishing between military and civilian targets. They destroyed everything that lay in their path, committed to breaking the will of the Confederacy and forcing an end to the war. General Grant, mastermind of the Vicksburg campaign, took charge of the overall war effort. He understood the advantage of having large numbers of soldiers at his disposal and recognized that Union soldiers could be replaced, whereas the Confederates, whose smaller population was feeling the strain of the years of war, could not. Grant thus pushed forward relentlessly, despite huge losses of men. In 1864, Grant committed his forces to destroying Lee’s army in Virginia. 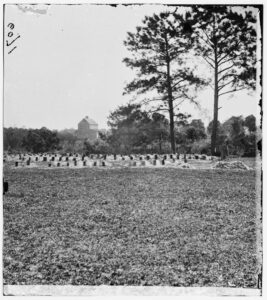 Figure 1. An April 1865 photo of the graves of Union soldiers buried at the race course-turned-Confederate-prison where historians believe the earliest Memorial Day ceremony took place.

Grant hoped to use his larger army to his advantage, and in May 1864, he ordered the Union’s Army of the Potomac to cross the Rapidan River in Virginia. Grant knew that Confederate general Robert E. Lee would defend the Confederate capital at Richmond at all costs, committing troops that might otherwise be sent to the Shenandoah or the Deep South to stop Union General William Tecumseh Sherman from capturing Atlanta, a key Confederate city. For two days, from May 5 thru May 7, the Army of the Potomac fought Lee’s troops in the Wilderness, a wooded area along the Rapidan River. Nearly ten thousand Confederate soldiers were killed or wounded, as were more than seventeen thousand Union troops. Despite these immense losses rather than retreating Grant pushed forward.

At the Battle of Spotsylvania on May 8 through 12, Grant again faced determined Confederate resistance, who again halted his progress. As before, he renewed the Union campaign. At the Battle of Cold Harbor in early June, Grant had between 100,000 and 110,000 soldiers, whereas the Confederates had slightly more than half that number. Yet again, southern troops stood strong and inflicted heavy casualties on the Union troops, forcing Grant to move his army away from Cold Harbor to Petersburg, Virginia, a rail center that supplied Richmond. In total at the Battle of Cold Harbor fifteen thousand men were wounded or killed. As in many battles, the bodies of those who died were left on the field where they fell. A year later, African Americans, who were often called upon to perform menial labor for the Union army, collected the skeletal remains of the dead for a proper burial. The state of the graves of many Civil War soldiers partly inspired the creation of Memorial Day, a day set aside for visiting and decorating the graves of the dead.

Overall, these immense losses severely hurt Union morale. The war seemed unending, and with the tremendous loss of life, many in the North began to question the war and desire peace. However, undaunted by the changing opinion in the North and hoping to destroy the Confederate rail network in the Upper South, Grant laid siege to Petersburg for nine months. As the months wore on, both sides dug in, creating miles of trenches and gun emplacements.

Check out this article and video by Time about how the Memorial Day holiday came to be.

The other major Union campaigns of 1864 were more successful and gave President Lincoln the advantage that he needed to win reelection in November. In August 1864, the Union navy captured Mobile Bay, Alabama. General Sherman invaded the Deep South, advancing slowly from Tennessee into Georgia. Confederates led by General Johnston confronted him at every turn, as they tried desperately to stop Sherman’s progress. When President Davis replaced Johnston with General John B. Hood, the Confederates made a daring but ultimately costly direct attack on the Union army that failed to drive out the invaders. Atlanta fell to Union forces on September 2, 1864. The fall of Atlanta held tremendous significance for the war-weary Union and helped to reverse the North’s sinking morale.

In keeping with the logic of total war, Sherman’s forces cut a swath of destruction to Savannah. On Sherman’s March to the Sea, the Union army, seeking to demoralize the South, destroyed everything in its path, despite strict instructions regarding the preservation of civilian property. Although towns were left standing, houses and barns were burned. Homes were looted, food was stolen, crops were destroyed, orchards were burned, and livestock was killed or confiscated. Savannah fell on December 21, 1864—a Christmas gift for Lincoln, Sherman proclaimed. In 1865, Sherman’s forces invaded South Carolina, capturing Charleston and Columbia. In Columbia, the state capital, the Union army burned planters’ homes and destroyed much of the city. From South Carolina, Sherman’s force moved north in an effort to unite with Grant and his forces to finally destroy Lee’s army.

Learn more about General Sherman and the strategy behind Sherman’s March to the Sea.

You can view the transcript for “Who was General Sherman?” here (opens in new window).

DOLLY SUMNER LUNT ON SHERMAN’S MARCH TO THE SEA

The following account is by Dolly Sumner Lunt, a widow who ran her Georgia cotton plantation after the death of her husband. She describes General Sherman’s march to Savannah, where he enacted the policy of total war by burning and plundering the landscape to inhibit the Confederates’ ability to keep fighting.

Alas! little did I think while trying to save my house from plunder and fire that they were forcing my boys [slaves] from home at the point of the bayonet. One, Newton, jumped into bed in his cabin, and declared himself sick. Another crawled under the floor,—a lame boy he was,—but they pulled him out, placed him on a horse, and drove him off. Mid, poor Mid! The last I saw of him, a man had him going around the garden, looking, as I thought, for my sheep, as he was my shepherd. Jack came crying to me, the big tears coursing down his cheeks, saying they were making him go. I said: ‘Stay in my room.’

But a man followed in, cursing him and threatening to shoot him if he did not go; so poor Jack had to yield. . . .

Sherman himself and a greater portion of his army passed my house that day. All day, as the sad moments rolled on, were they passing not only in front of my house, but from behind; they tore down my garden palings, made a road through my back-yard and lot field, driving their stock and riding through, tearing down my fences and desolating my home—wantonly doing it when there was no necessity for it. . . .

About ten o’clock they had all passed save one, who came in and wanted coffee made, which was done, and he, too, went on. A few minutes elapsed, and two couriers riding rapidly passed back. Then, presently, more soldiers came by, and this ended the passing of Sherman’s army by my place, leaving me poorer by thirty thousand dollars than I was yesterday morning. And a much stronger Rebel!

According to this account, what was the reaction of enslaved people to the arrival of the Union forces? What did the Union forces do with the enslaved? For Lunt, did the strategy of total war work as planned?

Battle of Cold Harbor: Two-week battle fought at beginning of June 1864, Despite being heavily outnumbered the Confederate forces beat back multiple frontal assaults by Grant’s army. Cold Harbor was the final victory won by Lee’s army during the war.

Battle of Spotsylvania: Armed conflict from May 8 through May 21, 1864, as Grant tried various schemes to break the Confederate line. In the end, the battle was tactically inconclusive, but both sides declared victory.