Why It Matters: Imperial Reforms and Colonial Protests

Why is it important to understand rising tensions in colonial North America leading up to the Revolutionary War? 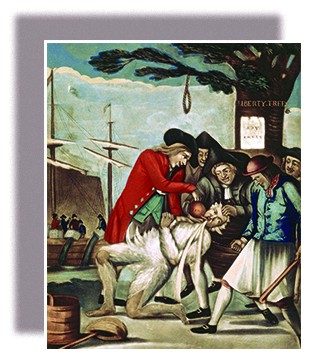 Figure 1. The Bostonians Paying the Excise-man, or Tarring and Feathering (1774), attributed to Philip Dawe, depicts the most publicized tarring and feathering incident of the American Revolution. The victim is John Malcolm, a customs official loyal to the British crown.

The picture on the right, The Bostonians Paying the Excise-man, or Tarring and Feathering, shows five American patriots tarring and feathering the Commissioner of Customs, John Malcolm, a staunch British Loyalist. In the background, the print shows the Boston Tea Party and the Liberty Tree, an elm tree near Boston Common that became a rallying point against the Stamp Act of 1765. When the crowd threatened to hang Malcolm if he did not renounce his position as a royal customs officer, he reluctantly agreed and the protestors allowed him to go home. The scene illustrates the animosity toward royal authority and those who supported it. It also shows the level of unrest in the colonies after the British government imposed a series of imperial reform measures between 1763–1774, aimed at relieving the national debt caused by the Seven Years’ War, as well as exercising greater control over the North American colonies.

The British government’s new reforms sought to shore up their formerly lax oversight of the colonies, especially now that it was clear how lucrative the New World could be in terms of agriculture, raw materials, and tax revenue. The British hoped to gain greater control over colonial trade and frontier settlement as well as to reduce the administrative cost of the colonies and the enormous debt left by the French and Indian War. Each measure the British government took, however, generated a more intense colonial backlash. Over time, imperial reforms pushed many colonists to consider formal separation from the British Empire.

It is important to study these events because they are an integral part of how America was founded. The colonists’ reasons for initiating the Revolutionary War varied from place to place, but there was a general consensus up and down the East coast and beyond, that the colonies were no longer benefitting from their membership in the British Empire. They began to place the values of liberty and independence above their relationship with Britain.

A unique American identity began to emerge from this period, rooted in individual liberty, self-reliance, and innovation. The painful process of separation from the Empire, and the lives lost in order to accomplish it, solidified the American colonists’ perception of themselves as a nation apart, founding on ideals of liberty and equality, but yet still steeped in many of the biased attitudes and traditional ways of the Old World.