Why It Matters: The Antebellum South

Why learn about the Antebellum South? 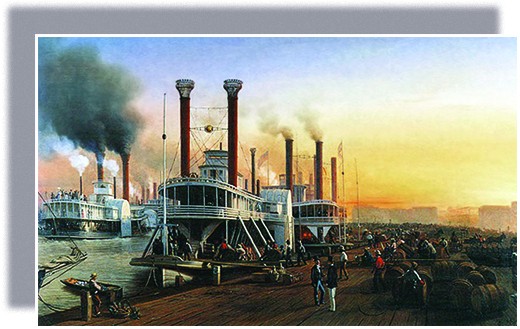 Figure 1. Bateaux à Vapeur Géant, la Nouvelle-Orléans 1853 (Giant Steamboats at New Orleans, 1853), by Hippolyte Sebron, shows how New Orleans, at the mouth of the Mississippi River, was the primary trading hub for the cotton that fueled the growth of the southern economy. In this image, innumerable enslaved persons load cargo onto a steamship in the Port of New Orleans, the commercial center of the antebellum South, while two well-dressed White men stand by talking. Commercial activity extends as far as the eye can see.

In the decades leading up to the Civil War the southern states experienced extraordinary change that would have lasting impact and define the region and its role in American history. Between the 1830s and the beginning of the Civil War in 1861, the American South expanded its wealth and population and became an integral part of an increasingly global economy, primarily through cash crops like cotton. It did not, as previous generations of histories have told, sit back on its cultural and social traditions and insulate itself from an expanding system of communication, trade, and production that connected Europe and Asia to the Americas. Quite the opposite; the South actively sought and used new technologies and trade routes, while also seeking to assimilate and upgrade its most “traditional” and culturally ingrained practices—such as slavery and agricultural production—within a modernizing world. Nine new slave states entered the Union between 1789 and 1860, rapidly expanding and transforming the South into a region of economic growth built on enslaved labor.

Beginning in the 1830s, merchants from the Northeast, Europe, Canada, Mexico, and the Caribbean flocked to southern cities, setting up trading firms, warehouses, ports, and markets. As a result, these cities—Richmond, Charleston, St. Louis, Mobile, Savannah, and New Orleans, to name a few—doubled and even tripled in size and global importance. Ports that had once focused entirely on the importation of enslaved laborers and shipped only regionally became home to daily and weekly shipping lines to New York City, Liverpool, Manchester, Le Havre, and Lisbon. The world was slowly but surely getting smaller, and the South was right in the middle.

By the mid-nineteenth century, southern commercial centers like New Orleans had become home to the greatest concentration of wealth in the United States. Populations became more cosmopolitan, better educated, and wealthier. Systems of class—lower-, middle-, and upper-class communities—developed where they had never clearly existed. While most White southerners did not own enslaved laborers, they aspired to join the ranks of elite enslavers, who played a key role in the politics of both the South and the nation. Meanwhile, slavery shaped the culture and society of the South, which rested on a racial ideology of White supremacy and a vision of the United States as a White man’s republic. Enslaved laborers endured the traumas of slavery by creating their own culture and using the Christian message of redemption to find hope for a world of freedom without violence.