Why It Matters: The Early Republic

Why examine the rise of the first two-party system and the early foreign and domestic affairs in early American politics? 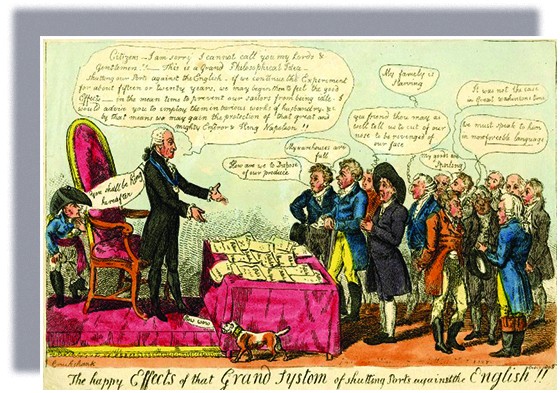 Figure 1. “The happy Effects of the Grand Systom [sic] of shutting Ports against the English!!” appeared in 1808. Less than a year earlier, Thomas Jefferson had recommended (and Congress had passed) the Embargo Act of 1807, which barred American ships from leaving their ports.

The partisan political cartoon above lampoons Thomas Jefferson’s 1807 Embargo Act, a move that had a devastating effect on American commerce. The artist depicts American farmers and merchants complaining to President Jefferson, while the French emperor Napoleon Bonaparte whispers to him, “You shall be King hereafter.” This image illustrates one of many political struggles in the years after the fight for ratification of the Constitution. In the nation’s first few years, no organized political parties existed, a situation almost unimaginable today. This began to change as U.S. citizens argued bitterly about the proper size and scope of the new national government. As a result, the 1790s witnessed the rise of opposing political parties: the Federalists and the Democratic-Republicans. Federalists saw unchecked democracy as a dire threat to the republic, and they pointed to the excesses of the French Revolution as proof of what awaited. Democratic-Republicans opposed the Federalists’ notion that only the wellborn and well educated were able to oversee the republic; they saw it as a pathway to oppression by an aristocracy.

These debates over the nature of the new national government would be central to history of the early republic. Federalists argued for an expanding role for the national government, and Democratic-Republicans opposed that view.  In the 1790s, discord over the role of the federal government with respect to finance would mark the first major split between Federalists and Democratic-Republicans. Meanwhile the events of the French Revolution would pull the young nation into conflict with old enemies and allies, and further exacerbate partisan division.

While Democratic-Republicans supported France, Federalists supported Britain in the war between the two nations. That conflict would dominate U.S. foreign policy and culminate in the War of 1812.  At home the opposition to the expanded role of the federal government would culminate in the Whiskey Rebellion. Defeating the rebels signaled that the expanded power of the government was here to stay. That power would soon be brought to bear against Native Americans who would see their lands and authority dramatically diminished in the first decades of the young republic. The power of the government was not the only area to expand. The 1803 Louisiana Purchase would double the size of the nation, and the end of the War of 1812 would allow the United States to turn its eyes west, ushering in a period of unbridled expansion.