Women took part in all the antebellum reforms, from transcendentalism to temperance to abolition. In many ways, traditional views of women as nurturers played a role in encouraging their participation. Women who joined the cause of temperance, for example, amplified their accepted role as moral guardians of the home. Some women advocated a much more expansive role for themselves and their peers by educating children and men in solid republican principles. But it was their work in antislavery efforts that served as a springboard for women to take action against gender inequality. Many, especially northern women, came to the conclusion that they, like the enslaved, were held in shackles by a society dominated by White men.

Republican Motherhood in the Antebellum Years

In the early nineteenth century, the dominant understanding of gender claimed that women were the guardians of virtue and the spiritual heads of the home. Women were expected to be pious, pure, submissive, and domestic, and to pass these virtues on to their children. Historians have described these expectations as the “Cult of Domesticity,” or the “Cult of True Womanhood,” and they developed in tandem with industrialization, the market revolution, and the Second Great Awakening. These economic and religious transformations only served to deepen the divide between the public space of work and politics and the domestic space of leisure and morality. Reform work related to labor laws, prison reform, and antislavery used women’s roles as guardians of morality to address issues that they felt contributed to the moral decline of society. In spite of this apparent valuation of women’s position in society, there were clear limitations. Under the requirements of coverture, a cultural holdover from pre-Enlightenment England, men gained legal control over their wives’ property, and women had no legal rights over their own children. Additionally, women could not initiate divorce, make wills, sign contracts, or vote.

In the era of revivalism and reform, Americans understood the family and home as the foundation of civic virtue and moral influence. This increasingly confined middle-class White women to the domestic sphere, where they were responsible for educating children and maintaining household virtue. Yet women took the very ideology that defined their place in the home and used it to fashion a public role for themselves. As a result, women actually became more visible and active in the public sphere than ever before. The influence of the Second Great Awakening, coupled with new educational opportunities available to girls and young women, enabled White middle-class women to leave their homes en masse, joining and forming societies dedicated to everything from literary interests to the antislavery movement. Of course, these opportunities were generally not afforded to working-class women and women of color, who found themselves fighting even harder for basic reforms such as education, labor reform, health care, and other economic opportunities.

Female education provides an example of the great strides made by and for women during the antebellum period. As part of a larger education reform movement in the early republic, several female reformers worked tirelessly to increase women’s access to education. They argued that if women were to take charge of the education of their children, they needed to be well educated themselves. While the women’s education movement did not generally push for women’s political or social equality, it did assert women’s intellectual equality with men, an idea that would eventually have important effects. Educators such as Emma Willard, Catharine Beecher, and Mary Lyons (founders of the Troy Female Seminary, Hartford Female Seminary, and Mount Holyoke Seminary, respectively) adopted the same rigorous curriculum that was used for boys. Many of these schools had the particular goal of training women to be teachers. Many graduates of these prominent seminaries would found their own schools, spreading women’s education across the country, and with it ideas about women’s potential to take part in public life.

Some northern female reformers saw new and vital roles for their sex in the realm of education. They believed in traditional gender roles, viewing women as inherently more moral and nurturing than men. Because of these attributes, these new feminists argued, women were uniquely qualified to take up the roles of educators of children. Catharine Beecher, the daughter of Lyman Beecher, pushed for women’s roles as educators. In her 1845 book, The Duty of American Women to Their Country, she argued that the United States had lost its moral compass due to democratic excess. Both “intelligence and virtue” were imperiled in an age of riots and disorder. Women, she argued, could restore the moral center by instilling in children a sense of right and wrong. Beecher represented a northern, middle-class female sensibility. The home, especially the parlor, became the site of northern female authority.

The abolitionist movement was another important school for women’s public engagement. Many of the earliest women’s rights advocates began their activism by fighting the injustices of slavery, including Angelina and Sarah Grimké, Lucretia Mott, Sojourner Truth, Elizabeth Cady Stanton, and Susan B. Anthony. In the 1830s, women in cities such as Boston, New York, and Philadelphia established female societies dedicated to the antislavery cause. Initially, these societies were similar to the prayer and fund-raising-based projects of other reform societies. As such societies proliferated, however, their strategies changed. Women could not vote, for example, but they increasingly used their right to petition to express their antislavery grievances to the government. Impassioned women like the Grimké sisters even began to travel on lecture circuits. This latter strategy, born of fervent antislavery advocacy, ultimately tethered the cause of women’s rights to abolitionism.

Figure 1. An 1870 photograph of Sojourner Truth.

Sarah Moore Grimké and Angelina Emily Grimké were born to a wealthy family in Charleston, South Carolina, where they witnessed the horrors of slavery firsthand. Repulsed by the treatment of the enslaved laborers on the Grimké plantation, they decided to support the antislavery movement by sharing their experiences on northern lecture tours. At first speaking to female audiences, they soon attracted “promiscuous” crowds of both men and women. They were among the earliest and most famous American women to take such a public role in the name of reform. When the Grimké sisters met substantial harassment and opposition to their public speaking on antislavery, they were inspired to speak out against more than the slave system. They began to see that they would need to fight for women’s rights in order to fight for the rights of enslaved people. Other female abolitionists soon joined them in linking the issues of women’s rights and abolitionism by drawing direct comparisons between the condition of free women in the United States and the condition of enslaved persons.

Sojourner Truth was one of the most prominent female abolition activists and held a great deal of influence, having been enslaved until the age of around 29 when she fled with her infant daughter. Truth was functionally illiterate, but her speeches on the women’s rights and abolition circuit became quite famous because she had a talent for public speaking. In 1850, the abolitionist William Lloyd Garrison published Truth’s memoirs, which helped to stir sympathy and outrage from Northerners because of the horrors of abuse and sexual assault at the hands of her enslavers which Truth described.

As the antislavery movement gained momentum in northern states in the 1830s and 1840s, so too did efforts for women’s rights. These efforts came to a head at an event that took place in London in 1840. That year, Lucretia Mott was among the American delegates attending the World Anti-Slavery Convention in London. Because of ideological disagreements between some of the abolitionists, the convention’s organizers refused to seat the female delegates or allow them to vote during the proceedings. Angered by such treatment, Mott and Elizabeth Cady Stanton, whose husband was also a delegate, returned to the United States with a renewed interest in pursuing women’s rights. In 1848, they organized the Seneca Falls Convention, a two-day summit in New York state in which women’s rights advocates came together to discuss the problems facing women. 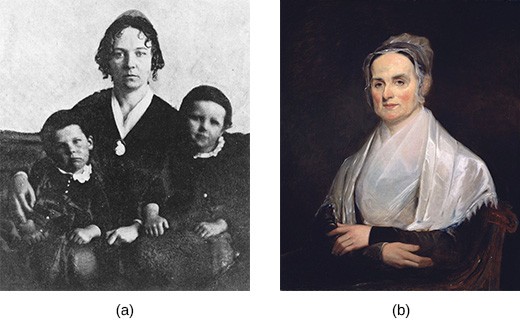 Figure 2. Elizabeth Cady Stanton (a) and Lucretia Mott (b) both emerged from the abolitionist movement as strong advocates of women’s rights.

Stanton wrote the Declaration of Sentiments for the Seneca Falls Convention to capture the wide range of issues embraced by the early women’s rights movement. She modeled the document on the Declaration of Independence to make explicit the connection between women’s liberty and the rhetoric of America’s founding.

In 1848, about three hundred male and female feminists, many of them veterans of the abolition movement, gathered at the Seneca Falls Convention in New York for a conference on women’s rights that was organized by Lucretia Mott and Elizabeth Cady Stanton. It was the first of what became annual meetings that have continued to the present day. Attendees agreed to a Declaration of Rights and Sentiments based on the Declaration of Independence; it stated:

“We hold these truths to be self-evident: that all men and women are created equal; that they are endowed by their Creator with certain inalienable rights; that among these are life, liberty, and the pursuit of happiness. The history of mankind is a history of repeated injuries and usurpations on the part of man toward woman, having in direct object the establishment of an absolute tyranny over her.”

Read the entire text of the Declaration of Rights and Sentiments in the Internet Modern History Sourcebook at Fordham University.

Antebellum women’s rights reformers fought what they perceived as senseless gender discrimination, such as the barring of women from college and inferior pay for female teachers. They also argued that men and women should be held to the same moral standards. The Seneca Falls Convention was the first of many such gatherings promoting women’s rights, held almost exclusively in the northern states. Yet the women’s rights movement grew slowly and experienced few victories. Few states reformed married women’s property laws before the Civil War, and no state was prepared to offer women the right to vote during the antebellum period. At the onset of the Civil War, women’s rights advocates temporarily threw the bulk of their support behind abolition, allowing the cause of racial equality to temporarily trump that of gender equality. But the words of the Seneca Falls convention continued to inspire generations of activists.

This video examines many of the changes in women’s rights during the 1800s, including the Christian Temperance Union, the Seneca Falls Convention, and the Declaration of Sentiments.

You can view the transcript for “Women in the 19th Century: Crash Course US History #16” here (opens in new window).

How did the abolitionist movement impact the women’s movement?

coverture: laws based on the idea that women belonged either to their father or their husband. Unmarried women had few rights without their father’s consent, and married women could not do basic things like access money, make a will, hold a bank account, divorce, or vote. They also lost custody of their children automatically if their husband divorced them.

Cult of Domesticity: the idea that a woman’s place was in the home, educating children, keeping a budget and the family finances, hosting social gatherings, and creating a welcoming and wholesome home environment for her husband and children

Grimke sisters: Angelina and Sarah Grimke were some of the first female activists for women’s rights and abolition, having grown up on a southern plantation and seen the horrors of slavery up close

Seneca Falls Convention: the location of the first American conference on women’s rights and the signing of the “Declaration of Rights and Sentiments” in 1848; this Declaration was modeled on the U.S. Declaration of Independence and addressed women’s grievances and requests for equality

Sojourner Truth: one of the first Black female activists who worked both for abolition and women’s rights. Truth was the first Black woman in the U.S. to win a court case against a White man, when she sued her former enslaver for illegally selling her young son to another man after New York’s emancipation laws had taken effect