Introduction to the Abolition Movement

What you’ll learn to do: describe the major players and approaches to the abolitionist movement in the early to mid-nineteenth century 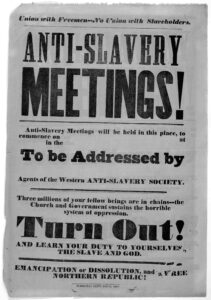 Reformers in the antebellum United States addressed the issue of slavery through contrasting proposals that offered many different solutions to the dilemma of the institution. Leading American statesmen, including some enslavers, favored a colonization plan, which would relocate formerly enslaved people to Africa, a plan scorned by abolitionists. Slave rebellions sought the end of the institution through its violent overthrow, a tactic that horrified many in the North and the South. Abolitionists, especially those who followed William Lloyd Garrison, provoked equally strong reactions by envisioning a new, multi-racial United States without slavery, where Black people and White people stood on equal footing. Opponents saw abolition as the worst possible reform, a threat to all social order and to the economy of the South. Enslavers, in particular, saw slavery as a positive aspect of American society, one that reformed the lives of enslaved people by exposing them to civilization and religion.