The issue of slavery proved especially combustible in the reform-minded antebellum United States. Those who hoped to end slavery had different ideas about how to do it. Some could not envision a multiracial society and advocated sending Blacks to Africa or the Caribbean. Others promoted the use of violence as the best method to bring American slavery to an end. Abolitionists, by contrast, worked to end slavery and to create a multiracial society of equals using moral arguments—moral suasion—to highlight the immorality of slavery. In keeping with the religious fervor of the era, abolitionists hoped to bring about a mass conversion in public opinion to end slavery.

An early and popular “reform” to slavery was colonization, or a plan to move free Blacks and formerly enslaved people out of the country, usually to Africa. In 1816, the Society for the Colonization of Free People of Color of America (also called the American Colonization Society or ACS) was founded with this goal. Leading statesmen including an aging Thomas Jefferson, endorsed the idea of colonization.

Members of the ACS did not believe that Blacks and Whites could live peacefully as equals, so they targeted the roughly 200,000 free Blacks in the United States for relocation to Africa. For several years after the ACS’s founding, they raised money and pushed Congress for funds. In 1819, they succeeded in getting $100,000 from the federal government to further the colonization project. The ACS played a major role in the creation of the colony of Liberia, on the west coast of Africa. The country’s capital, Monrovia, was named in honor of President James Monroe. The ACS stands as an example of how White reformers, especially men of property and standing, addressed the issue of slavery. Their efforts stand in stark contrast with other reformers’ efforts to deal with slavery in the United States.

The African-American community and abolitionist movement overwhelmingly opposed the project. In most cases, African Americans’ families had lived in the United States for generations, and their prevailing sentiment was that they were no more African than White Americans were European. Contrary to stated claims that emigration was voluntary, many African Americans, both free and enslaved, were pressured into emigrating. Indeed, enslavers sometimes manumitted their slaves on condition that the freedmen leave the country immediately. Between 1821 and 1847, only a few thousand African Americans, out of the then millions in the U.S., emigrated to what would become Liberia. Close to half of them died from tropical diseases. In addition, the transportation of the emigrants to the African continent, including the provisioning of requisite tools and supplies, proved very expensive.

The history of racism and support for White supremacy in the United States existed since before the nation was even formed. These ideas, many of which still persist today, have led to exclusionary policies and practices. One example of this is the thinking of the colonizationists, who believed that free Black communities should not exist in the United States, but that Black people, born and living in America, should be sent back to Africa to live separately from White Americans, despite not having any ties or support networks there. In this video, historian Martha Jones discusses the colonization movement. 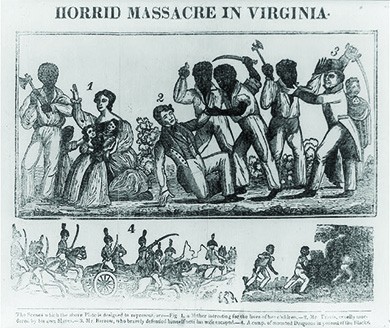 Figure 1. In Horrid Massacre in Virginia, circa 1831, the text on the bottom reads, “The Scenes which the above plate is designed to represent are Fig 1. a mother intreating for the lives of her children. 2. Mr. Travis, cruelly murdered by his own Slaves. 3. Mr. Barrow, who bravely defended himself until his wife escaped. 4. A comp. of mounted Dragoons in pursuit of the Blacks.” From whose side do you think the illustrator is telling this story?

Although rebellion stretches the definition of reform, another potential solution to slavery was its violent overthrow. Nat Turner’s Rebellion, one of the largest slave uprisings in American history, took place in 1831, in Southampton County, Virginia. Like many slaves, Nat Turner was inspired by the evangelical Protestant fervor sweeping the republic, and he preached in favor of rebellion.

Mustering his relatives and friends, he began the rebellion August 22, killing around sixty-five Whites in the county. Whites mobilized quickly and within forty-eight hours had brought the rebellion to an end, though Turner remained hidden for another month until he was tried and hanged, along with over fifty other participants in the rebellion. Shocked by Nat Turner’s Rebellion, Virginia’s state legislature considered ending slavery in the state in order to provide greater security. In the end, legislators decided slavery would remain and that their state would continue to play a key role in the domestic slave trade, and many White southerners formed militias to prevent further slave rebellions.

Many literate, educated Blacks, including David Walker, also favored rebellion. Walker was born a free Black man in North Carolina in 1796. He moved to Boston in the 1820s, lectured on slavery, and promoted the first African American newspaper, Freedom’s Journal. He called for Blacks to actively resist slavery and to use violence if needed. He published An Appeal to the Colored Citizens of the World in 1829, denouncing the scheme of colonization and urging Blacks to fight for equality in the United States, to take action against racism. Walker died months after the publication of his Appeal, and debate continues to this day over the cause of his death. Many believe he was murdered. Walker became a symbol of hope to free people in the North and a symbol of the terrors of literate, educated Blacks to the slaveholders of the South.

The revivalist doctrines of salvation, perfectionism, and disinterested benevolence led many evangelical reformers to believe that slavery was the most terrible blight on the moral virtue of the United States. While White interest in and commitment to abolition had existed for several decades, organized antislavery advocacy had been largely restricted to models of gradual emancipation (seen in several northern states following the American Revolution) and conditional emancipation (seen in colonization efforts to remove Black Americans to settlements in Africa). By the 1830s, however, a rising tide of anti-colonization sentiment among northern free Blacks and middle-class evangelicals’ flourishing commitment to social reform radicalized the movement. Baptists such as William Lloyd Garrison, Congregational revivalists like Arthur and Lewis Tappan and Theodore Dwight Weld, and radical Quakers including Lucretia Mott and John Greenleaf Whittier helped push the idea of immediate emancipation onto the center stage of northern reform agendas. Inspired by a strategy known as “moral suasion,” these young abolitionists believed they could convince slaveholders to voluntarily release their slaves by appealing to their sense of Christian conscience. In their minds, the result would be national redemption and moral harmony.

abolitionist: a believer in the complete elimination of slavery

colonization: the strategy of moving African Americans out of the United States, usually to Africa; this movement resulted in the establishment of the country of Liberia

gradual/conditional emancipation: plans for ending slavery which involved releasing enslaved people slowly over time to mitigate economic effects, or emancipating them with certain conditions, like their immigration to Africa

moral suasion: an abolitionist technique of appealing to the consciences of the public, especially slaveholders

Nat Turner’s Rebellion: a violent revolt led by an enslaved man, Nat Turner, who was thought to be a prophet; Turner and his companions killed several dozen White men, women, and children in Virginia before they were stopped; Turner was executed, along with 56 others, and militias in several southern states killed over 100 more enslaved people in the aftermath