Characteristics of Functions and Their Graphs

A jetliner changes altitude as its distance from the starting point of a flight increases. The weight of a growing child increases with time. In each case, one quantity depends on another. There is a relationship between the two quantities that we can describe, analyze, and use to make predictions. In this section, we will analyze such relationships.

A function [latex]f[/latex] is a relation that assigns a single value in the range to each value in the domain. In other words, no [latex]x[/latex]-values are used more than once. For our example that relates the first five natural numbers to numbers double their values, this relation is a function because each element in the domain, [latex]\left\{1,2,3,4,5\right\}[/latex], is paired with exactly one element in the range, [latex]\left\{2,4,6,8,10\right\}[/latex].

Now let’s consider the set of ordered pairs that relates the terms “even” and “odd” to the first five natural numbers. It would appear as

This image compares relations that are functions and not functions.

A function is a relation in which each possible input value leads to exactly one output value. We say “the output is a function of the input.”

The coffee shop menu consists of items and their prices.

The table below lists the five greatest baseball players of all time in order of rank.

Once we determine that a relationship is a function, we need to display and define the functional relationships so that we can understand and use them, and sometimes also so that we can program them into computers. There are various ways of representing functions. A standard function notation is one representation that makes it easier to work with functions.

We can also give an algebraic expression as the input to a function. For example [latex]f\left(a+b\right)[/latex] means “first add [latex]a[/latex] and [latex]b[/latex], and the result is the input for the function [latex]f[/latex].” We must perform the operations in this order to obtain the correct result.

The notation [latex]y=f\left(x\right)[/latex] defines a function named [latex]f[/latex]. This is read as [latex]``y[/latex] is a function of [latex]x.''[/latex] The letter [latex]x[/latex] represents the input value, or independent variable. The letter [latex]y[/latex], or [latex]f\left(x\right)[/latex], represents the output value, or dependent variable.

Example: Using Function Notation for Days in a Month

Use function notation to represent a function whose input is the name of a month and output is the number of days in that month in a non-leap year.

For example, [latex]f\left(\text{April}\right)=30[/latex], because April has 30 days. The notation [latex]d=f\left(m\right)[/latex] reminds us that the number of days, [latex]d[/latex] (the output), is dependent on the name of the month, [latex]m[/latex] (the input).

We must restrict the function to non-leap years. Otherwise February would have 2 outputs and this would not be a function. Also note that the inputs to a function do not have to be numbers; function inputs can be names of people, labels of geometric objects, or any other element that determines some kind of output. However, most of the functions we will work with in this book will have numbers as inputs and outputs.

Yes, this is often done, especially in applied subjects that use higher math, such as physics and engineering. However, in exploring math itself we like to maintain a distinction between a function such as [latex]f[/latex], which is a rule or procedure, and the output [latex]y[/latex] we get by applying [latex]f[/latex] to a particular input [latex]x[/latex]. This is why we usually use notation such as [latex]y=f\left(x\right),P=W\left(d\right)[/latex], and so on.

A common method of representing functions is in the form of a table. The table rows or columns display the corresponding input and output values. In some cases these values represent all we know about the relationship; other times the table provides a few select examples from a more complete relationship.

The table below lists the input number of each month (January = 1, February = 2, and so on) and the output value of the number of days in that month. This information represents all we know about the months and days for a given year (that is not a leap year). Note that, in this table, we define a days-in-a-month function [latex]f[/latex], where [latex]D=f\left(m\right)[/latex] identifies months by an integer rather than by name.

The table below defines a function [latex]Q=g\left(n\right)[/latex]. Remember, this notation tells us that [latex]g[/latex] is the name of the function that takes the input [latex]n[/latex] and gives the output [latex]Q[/latex].

The table below displays the age of children in years and their corresponding heights. This table displays just some of the data available for the heights and ages of children. We can see right away that this table does not represent a function because the same input value, 5 years, has two different output values, 40 in. and 42 in.

How To: Given a table of input and output values, determine whether the table represents a function.

When a table represents a function, corresponding input and output values can also be specified using function notation.

c) cannot be expressed in a similar way because it does not represent a function.

Determine whether a function is one-to-one

However, some functions have only one input value for each output value, as well as having only one output for each input. We call these functions one-to-one functions. As an example, consider a school that uses only letter grades and decimal equivalents, as listed in.

To visualize this concept, let’s look again at the two simple functions sketched in (a) and (b) below.

A one-to-one function is a function in which each output value corresponds to exactly one input value.

Example: Determining Whether a Relationship Is a One-to-One Function

Is the area of a circle a function of its radius? If yes, is the function one-to-one?

If the function is one-to-one, the output value, the area, must correspond to a unique input value, the radius. Any area measure [latex]A[/latex] is given by the formula [latex]A=\pi {r}^{2}[/latex]. Because areas and radii are positive numbers, there is exactly one solution: [latex]r=\sqrt{\frac{A}{\pi }}[/latex]. So the area of a circle is a one-to-one function of the circle’s radius.

When we have a function in formula form, it is usually a simple matter to evaluate the function. For example, the function [latex]f\left(x\right)=5 - 3{x}^{2}[/latex] can be evaluated by squaring the input value, multiplying by 3, and then subtracting the product from 5.

How To: EVALUATE A FUNCTION Given ITS FORMula.

To evaluate [latex]h\left(4\right)[/latex], we substitute the value 4 for the input variable [latex]p[/latex] in the given function.

Replace the [latex]x[/latex] in the function with each specified value. 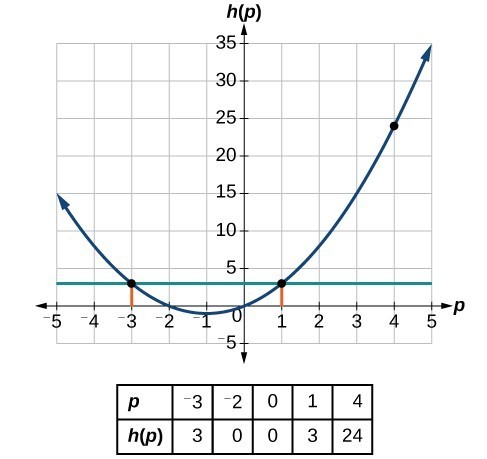 Some functions are defined by mathematical rules or procedures expressed in equation form. If it is possible to express the function output with a formula involving the input quantity, then we can define a function in algebraic form. For example, the equation [latex]2n+6p=12[/latex] expresses a functional relationship between [latex]n[/latex] and [latex]p[/latex]. We can rewrite it to decide if [latex]p[/latex] is a function of [latex]n[/latex].

How To: Given a function in equation form, write its algebraic formula.

Example: Finding an Equation of a Function

Express the relationship [latex]2n+6p=12[/latex] as a function [latex]p=f\left(n\right)[/latex], if possible.

Therefore, [latex]p[/latex] as a function of [latex]n[/latex] is written as

It is important to note that not every relationship expressed by an equation can also be expressed as a function with a formula.

Example: Expressing the Equation of a Circle as a Function

We now try to solve for [latex]y[/latex] in this equation.

We get two outputs corresponding to the same input, so this relationship cannot be represented as a single function [latex]y=f\left(x\right)[/latex].

Are there relationships expressed by an equation that do represent a function but which still cannot be represented by an algebraic formula?

Evaluating a Function Given in Tabular Form

As we saw above, we can represent functions in tables. Conversely, we can use information in tables to write functions, and we can evaluate functions using the tables. For example, how well do our pets recall the fond memories we share with them? There is an urban legend that a goldfish has a memory of 3 seconds, but this is just a myth. Goldfish can remember up to 3 months, while the beta fish has a memory of up to 5 months. And while a puppy’s memory span is no longer than 30 seconds, the adult dog can remember for 5 minutes. This is meager compared to a cat, whose memory span lasts for 16 hours.

The function that relates the type of pet to the duration of its memory span is more easily visualized with the use of a table. See the table below.

At times, evaluating a function in table form may be more useful than using equations. Here let us call the function [latex]P[/latex].

The domain of the function is the type of pet and the range is a real number representing the number of hours the pet’s memory span lasts. We can evaluate the function [latex]P[/latex] at the input value of “goldfish.” We would write [latex]P\left(\text{goldfish}\right)=2160[/latex]. Notice that, to evaluate the function in table form, we identify the input value and the corresponding output value from the pertinent row of the table. The tabular form for function [latex]P[/latex] seems ideally suited to this function, more so than writing it in paragraph or function form.

How To: Given a function represented by a table, identify specific output and input values.

Using the table below,

Using the table from the previous example, evaluate [latex]g\left(1\right)[/latex] .

Finding Function Values from a Graph

Given the graph below, 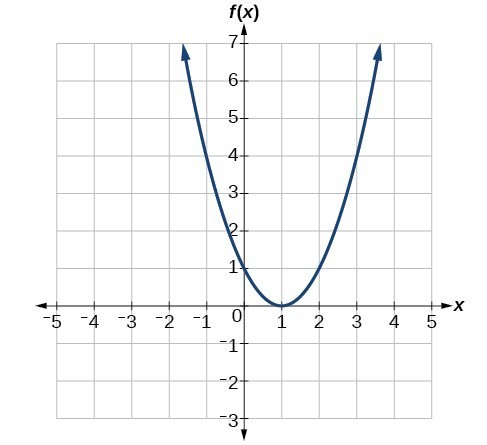 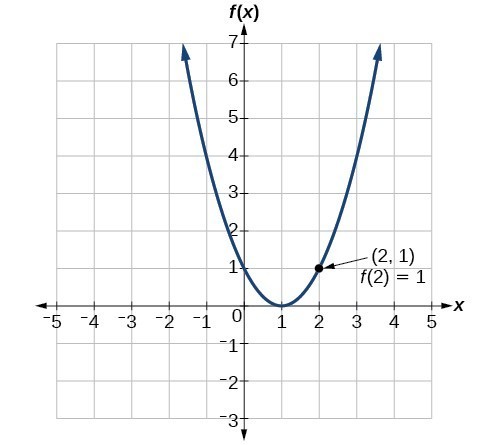 As we have seen in examples above, we can represent a function using a graph. Graphs display many input-output pairs in a small space. The visual information they provide often makes relationships easier to understand. We typically construct graphs with the input values along the horizontal axis and the output values along the vertical axis. 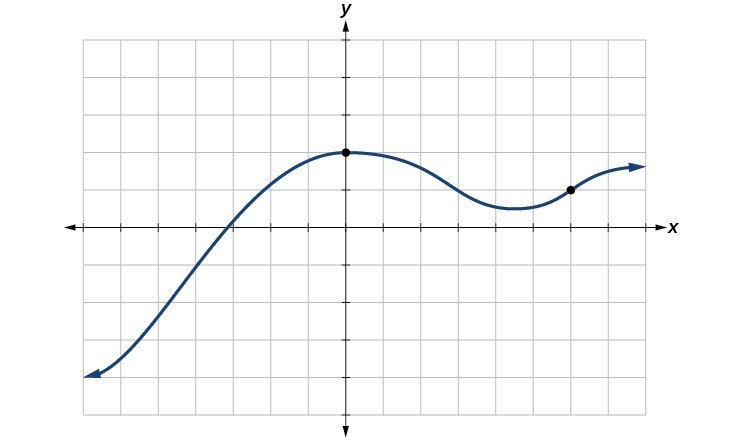 How To: Given a graph, use the vertical line test to determine if the graph represents a function.

Which of the graphs represent(s) a function [latex]y=f\left(x\right)?[/latex] 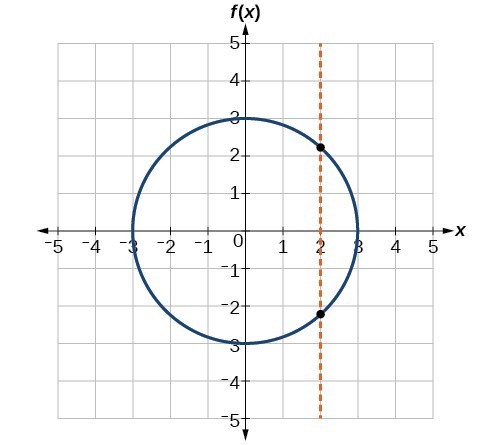 Does the graph below represent a function? 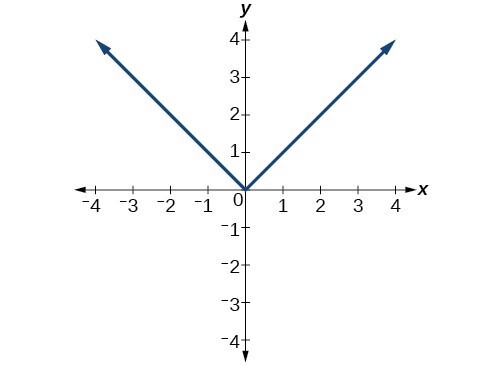 How To: Given a graph of a function, use the horizontal line test to determine if the graph represents a one-to-one function.

Consider the functions (a), and (b)shown in the graphs below.

Are either of the functions one-to-one? 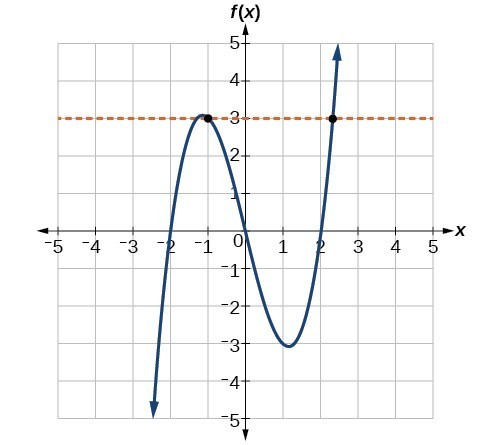 The function in (b) is one-to-one. Any horizontal line will intersect a diagonal line at most once.

In this text, we explore functions—the shapes of their graphs, their unique characteristics, their algebraic formulas, and how to solve problems with them. When learning to read, we start with the alphabet. When learning to do arithmetic, we start with numbers. When working with functions, it is similarly helpful to have a base set of building-block elements. We call these our “toolkit functions,” which form a set of basic named functions for which we know the graph, formula, and special properties. Some of these functions are programmed to individual buttons on many calculators. For these definitions we will use [latex]x[/latex] as the input variable and [latex]y=f\left(x\right)[/latex] as the output variable.

domain
the set of all possible input values for a relation

relation
a set of ordered pairs