Why It Matters: Function Basics

Why understand how to evaluate and manipulate functions? 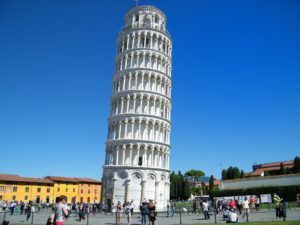 When Galileo was about 26 years old and working at the University of Pisa, he began considering the rates at which objects fall. Aristotle before him had predicted that the rate at which an object falls is dependent on its mass. In other words, a heavy object should fall faster than a lighter one.  Galileo devised an experiment to test this idea. Perhaps you have heard the famous story of Galileo dropping two balls of different masses from the top of the leaning Tower of Pisa.

There are two aspects of this story that are truly important. One is that controlled scientific experiments were simply not performed during his time. And quite frankly, the evidence is unclear as to whether he actually performed the experiment or just thought about the experiment based on observations on smaller scales, such as ramps. The story was recounted by one of Galileo’s students years after his death, but was never described by Galileo himself.

The other aspect is that Galileo’s conclusion, whether determined through experiment or thought, was that in the absence of air resistance all objects fall at the same rate regardless of mass. That rate is the acceleration due to gravity, which on Earth is 9.8 m/s2. This conclusion not only surprised Galileo and provided the first opposition to Aristotle’s theory, but forever changed our understanding of falling motion.

Knowing that all objects fall at the same rate, you can predict both the velocity of an object and the distance it has fallen after some amount of time.

It turns out that the Tower of Pisa, at just over 55 meters, is a little too short for substantial experiments with falling bodies. But suppose Galileo were around today. He could actually perform his experiment by hanging out of a window in the tallest building in the world, the Burj Khalifa in Dubai, which stands 828 meters tall!

The table below lists the velocity and distance traveled by an object dropped from some height at 1 second time intervals.

Consider the following questions when analyzing the table below:

Chart shows the correlation between time (seconds 1-8), velocity and distance.