Module 3B: Relationships and Sexuality

People who are lesbian, gay, bisexual, or transgender (LGBT) are members of every community. They are diverse, come from all walks of life, and include people of all races and ethnicities, all ages, all socioeconomic statuses, and from all parts of the United States and world. The perspectives and needs of LGBT people should be routinely considered in public health efforts to improve the overall health of every person and eliminate health disparities.

In addition to considering the needs of LGBT people in programs designed to improve the health of entire communities, there is also a need for culturally competent medical care and prevention services that are specific to this population. Social inequality is often associated with poorer health status, and sexual orientation has been associated with multiple health threats. Members of the LGBT community are at increased risk for a number of health threats when compared to their heterosexual peers. Differences in sexual behavior account for some of these disparities, but others are associated with social and structural inequities, such as the stigma and discrimination that LGBT populations still experience.

The Effects of Negative Attitudes and Discrimination

Lesbian, Gay, Bisexual, and Transgender (LGBT) sexual health and well-being is affected by numerous social and cultural challenges across the life course, contributing to negative health outcomes and posing barriers to attain such protective health indicators as marriage and family formation, community support, and inclusion in faith communities.

The incidence of hate crimes and discrimination promulgated through the denial of equal rights contribute to the perpetuation of homophobia as a structural norm. As a result of cultural and societal discrimination, many LGBT people suffer an added burden of stress and experience health disparities, such as:

The effects of homophobia, stigma and discrimination can be especially hard on adolescents and young adults. In addition to an increased risk of being bullied at school, they are also at risk of being rejected by their families and, as a result, are at increased risk of homelessness. A study published in 2009 compared gay, lesbian, and bisexual young adults who experienced strong rejection from their families with their peers who had more supportive families. The researchers found that those who experienced stronger rejection were about: 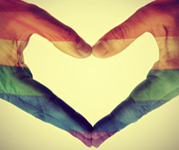 Whether you are gay or straight, you can help reduce homophobia, stigma, and discrimination in your community and decrease the associated negative health effects. Even small things can make a difference, such as accepting and supporting a family member, friend, or co-worker.