The ways in which humans interact with the land and its natural resources are determined by ethical attitudes and behaviors. Early European settlers in North America rapidly consumed the natural resources of the land. After they depleted one area, they moved westward to new frontiers. Their attitude towards the land was that of a frontier ethic. A frontier ethic assumes that the earth has an unlimited supply of resources. If resources run out in one area, more can be found elsewhere or alternatively human ingenuity will find substitutes. This attitude sees humans as masters who manage the planet. The frontier ethic is completely anthropocentric (human-centered), for only the needs of humans are considered.

Most industrialized societies experience population and economic growth that are based upon this frontier ethic, assuming that infinite resources exist to support continued growth indefinitely. In fact, economic growth is considered a measure of how well a society is doing. The late economist Julian Simon pointed out that life on earth has never been better, and that population growth means more creative minds to solve future problems and give us an even better standard of living. However, now that the human population has passed seven billion and few frontiers are left, many are beginning to question the frontier ethic. Such people are moving toward an environmental ethic, which includes humans as part of the natural community rather than managers of it. Such an ethic places limits on human activities (e.g., uncontrolled resource use), that may adversely affect the natural community.

Some of those still subscribing to the frontier ethic suggest that outer space may be the new frontier. If we run out of resources (or space) on earth, they argue, we can simply populate other planets. This seems an unlikely solution, as even the most aggressive colonization plan would be incapable of transferring people to extraterrestrial colonies at a significant rate. Natural population growth on earth would outpace the colonization effort. A more likely scenario would be that space could provide the resources (e.g. from asteroid mining) that might help to sustain human existence on earth.

For example, if a fuel shortage occurs, how can the problem be solved in a way that is consistent with a sustainable ethic? The solutions might include finding new ways to conserve oil or developing renewable energy alternatives. A sustainable ethic attitude in the face of such a problem would be that if drilling for oil damages the ecosystem, then that damage will affect the human population as well. A sustainable ethic can be either anthropocentric or biocentric (life-centered). An advocate for conserving oil resources may consider all oil resources as the property of humans. Using oil resources wisely so that future generations have access to them is an attitude consistent with an anthropocentric ethic. Using resources wisely to prevent ecological damage is in accord with a biocentric ethic.

Aldo Leopold, an American wildlife natural historian and philosopher, advocated a biocentric ethic in his book, A Sand County Almanac. He suggested that humans had always considered land as property, just as ancient Greeks considered slaves as property. He believed that mistreatment of land (or of slaves) makes little economic or moral sense, much as today the concept of slavery is considered immoral. All humans are merely one component of an ethical framework. Leopold suggested that land be included in an ethical framework, calling this the land ethic.

“The land ethic simply enlarges the boundary of the community to include soils, waters, plants and animals; or collectively, the land. In short, a land ethic changes the role of Homo sapiens from conqueror of the land-community to plain member and citizen of it. It implies respect for his fellow members, and also respect for the community as such.” (Aldo Leopold, 1949)

Leopold divided conservationists into two groups: one group that regards the soil as a commodity and the other that regards the land as biota, with a broad interpretation of its function. If we apply this idea to the field of forestry, the first group of conservationists would grow trees like cabbages, while the second group would strive to maintain a natural ecosystem. Leopold maintained that the conservation movement must be based upon more than just economic necessity. Species with no discernible economic value to humans may be an integral part of a functioning ecosystem. The land ethic respects all parts of the natural world regardless of their utility, and decisions based upon that ethic result in more stable biological communities.

In 1913, the Hetch Hetchy Valley – located in Yosemite National Park in California – was the site of a conflict between two factions, one with an anthropocentric ethic and the other, a biocentric ethic. As the last American frontiers were settled, the rate of forest destruction started to concern the public. 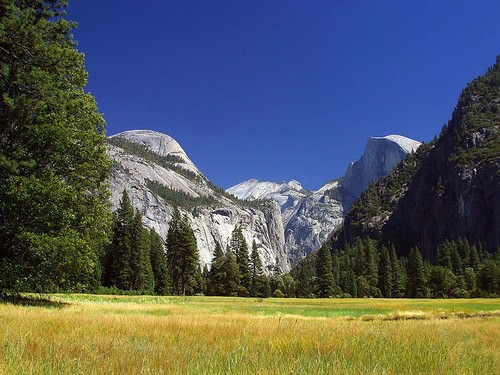 The conservation movement gained momentum, but quickly broke into two factions. One faction, led by Gifford Pinchot, Chief Forester under Teddy Roosevelt, advocated utilitarian conservation (i.e., conservation of resources for the good of the public). The other faction, led by John Muir, advocated preservation of forests and other wilderness for their inherent value. Both groups rejected the first tenet of frontier ethics, the assumption that resources are limitless. However, the conservationists agreed with the rest of the tenets of frontier ethics, while the preservationists agreed with the tenets of the sustainable ethic.

The Hetch Hetchy Valley was part of a protected National Park, but after the devastating fires of the 1906 San Francisco earthquake, residents of San Francisco wanted to dam the valley to provide their city with a stable supply of water. Gifford Pinchot favored the dam.

“As to my attitude regarding the proposed use of Hetch Hetchy by the city of San Francisco…I am fully persuaded that… the injury…by substituting a lake for the present swampy floor of the valley…is altogether unimportant compared with the benefits to be derived from it’s use as a reservoir.

“The fundamental principle of the whole conservation policy is that of use, to take every part of the land and its resources and put it to that use in which it will serve the most people.” (Gifford Pinchot, 1913)

John Muir, the founder of the Sierra Club and a great lover of wilderness, led the fight against the dam. He saw wilderness as having an intrinsic value, separate from its utilitarian value to people. He advocated preservation of wild places for their inherent beauty and for the sake of the creatures that live there. The issue aroused the American public, who were becoming increasingly alarmed at the growth of cities and the destruction of the landscape for the sake of commercial enterprises. Key senators received thousands of letters of protest.

“These temple destroyers, devotees of ravaging commercialism, seem to have a perfect contempt for Nature, and instead of lifting their eyes to the God of the Mountains, lift them to the Almighty Dollar.” (John Muir, 1912)

Despite public protest, Congress voted to dam the valley. The preservationists lost the fight for the Hetch Hetchy Valley, but their questioning of traditional American values had some lasting effects. In 1916, Congress passed the “National Park System Organic Act,” which declared that parks were to be maintained in a manner that left them unimpaired for future generations. As we use our public lands, we continue to debate whether we should be guided by preservationism or conservationism.

The Tragedy of the Commons

In his essay, The Tragedy of the Commons, Garrett Hardin (1968) looked at what happens when humans do not limit their actions by including the land as part of their ethic. The tragedy of the commons develops in the following way: Imagine a pasture open to all (the ‘commons’). It is to be expected that each herdsman will try to keep as many cattle as possible on the commons. As rational beings, each herdsman seeks to maximize their gain. Adding more cattle increases their profit, and they do not suffer any immediate negative consequence because the commons are shared by all.  The rational herdsman concludes that the only sensible course is to add another animal to their herd, and then another, and so forth. However, this same conclusion is reached by each and every rational herdsman sharing the commons. Therein lies the tragedy: each person is locked into a system that compels them to increase their herd, without limit, in a world that is limited. Eventually this leads to the ruination of the commons. In a society that believes in the freedom of the commons, freedom brings ruin to all because each person acts selfishly.

Hardin went on to apply the situation to modern commons: overgrazing of public lands, overuse of public forests and parks, depletion of fish populations in the ocean, use of rivers as a common dumping ground for sewage, and fouling the air with pollution.

The “Tragedy of the Commons” is applicable to what is arguably the most consequential environmental problem: global climate change. The atmosphere is a commons into which countries are dumping carbon dioxide from the burning of fossil fuels. Although we know that the generation of greenhouse gases will have damaging effects upon the entire globe, we continue to burn fossil fuels. As a country, the immediate benefit from the continued use of fossil fuels is seen as a positive component (because of economic growth). All countries, however, will share the negative long-term effects.