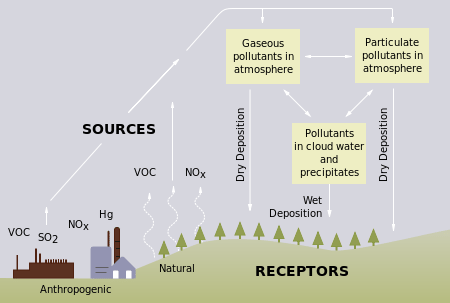 Acid rain is a term referring to a mixture of wet and dry deposition (deposited material) from the atmosphere containing higher than normal amounts of nitric and sulfuric acids. The precursors, or chemical forerunners, of acid rain formation result from both natural sources, such as volcanoes and decaying vegetation, and man-made sources, primarily emissions of sulfur dioxide (SO2) and nitrogen oxides (NOx) resulting from fossil fuel combustion. Acid rain occurs when these gases react in the atmosphere with water, oxygen, and other chemicals to form various acidic compounds. The result is a mild solution of sulfuric acid and nitric acid. When sulfur dioxide and nitrogen oxides are released from power plants and other sources, prevailing winds blow these compounds across state and national borders, sometimes over hundreds of miles.

Acid rain is measured using a scale called “pH.” The lower a substance’s pH, the more acidic it is. Pure water has a pH of 7.0. However, normal rain is slightly acidic because carbon dioxide (CO2) dissolves into it forming weak carbonic acid, giving the resulting mixture a pH of approximately 5.6 at typical atmospheric concentrations of CO2. As of 2000, the most acidic rain falling in the U.S. has a pH of about 4.3.

Acid rain causes acidification of lakes and streams and contributes to the damage of trees at high elevations (for example, red spruce trees above 2,000 feet) and many sensitive forest soils. In addition, acid rain accelerates the decay of building materials and paints, including irreplaceable buildings, statues, and sculptures that are part of our nation’s cultural heritage. Prior to falling to the earth, sulfur dioxide (SO2) and nitrogen oxide (NOx) gases and their particulate matter derivatives—sulfates and nitrates—contribute to visibility degradation and harm public health.

The ecological effects of acid rain are most clearly seen in the aquatic, or water, environments, such as streams, lakes, and marshes. Most lakes and streams have a pH between 6 and 8, although some lakes are naturally acidic even without the effects of acid rain. Acid rain primarily affects sensitive bodies of water, which are located in watersheds whose soils have a limited ability to neutralize acidic compounds (called “buffering capacity”). Lakes and streams become acidic (i.e., the pH value goes down) when the water itself and its surrounding soil cannot buffer the acid rain enough to neutralize it. In areas where buffering capacity is low, acid rain releases aluminum from soils into lakes and streams; aluminum is highly toxic to many species of aquatic organisms. Acid rain causes slower growth, injury, or death of forests. Of course, acid rain is not the only cause of such conditions. Other factors contribute to the overall stress of these areas, including air pollutants, insects, disease, drought, or very cold weather. In most cases, in fact, the impacts of acid rain on trees are due to the combined effects of acid rain and these other environmental stressors. Acid rain and the dry deposition of acidic particles contribute to the corrosion of metals(such as bronze) and the deterioration of paint and stone (such as marble and limestone). These effects significantly reduce the societal value of buildings, bridges, cultural objects (such as statues, monuments, and tombstones), and cars (Figure below). 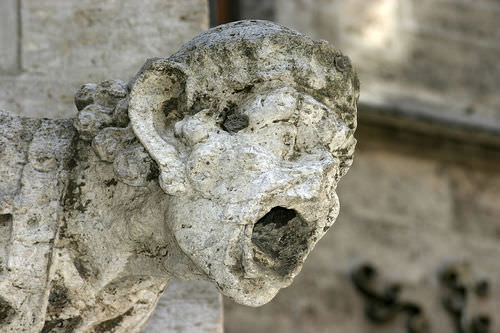 Figure 2. A gargoyle that has been damaged by acid rain.

A gargoyle that has been damaged by acid rain.

Sulfates and nitrates that form in the atmosphere from sulfur dioxide (SO2) and nitrogen oxides (NOx) emissions contribute to visibility impairment, meaning we cannot see as far or as clearly through the air. The pollutants that cause acid rain—sulfur dioxide (SO2) and nitrogen oxides (NOx)—damage human health. These gases interact in the atmosphere to form fine sulfate and nitrate particles that can be transported long distances by winds and inhaled deep into people’s lungs. Fine particles can also penetrate indoors. Many scientific studies have identified a relationship between elevated levels of fine particles and increased illness and premature death from heart and lung disorders, such as asthma and bronchitis.

September 24, 2016: “New research shows that human pollution of the atmosphere with acid is now almost back to the level that it was before the pollution started with industrialization in the 1930s. The results come from studies of the Greenland ice sheet.” Science Daily