At its most fundamental level, life is made of matter. Matter is something that occupies space and has mass. All matter is composed of elements, substances that cannot be broken down or transformed chemically into other substances. Each element is made of atoms, each with a constant number of protons and unique properties. A total of 118 elements have been defined; however, only 92 occur naturally and fewer than 30 are found in living cells. The remaining 26 elements are unstable and therefore do not exist for very long or are theoretical and have yet to be detected. Each element is designated by its chemical symbol (such as H, N, O, C, and Na), and possesses unique properties. These unique properties allow elements to combine and to bond with each other in specific ways.

An atom is the smallest component of an element that retains all of the chemical properties of that element. For example, one hydrogen atom has all of the properties of the element hydrogen, such as it exists as a gas at room temperature and it bonds with oxygen to create a water molecule. Hydrogen atoms cannot be broken down into anything smaller while still retaining the properties of hydrogen. If a hydrogen atom were broken down into subatomic particles, it would no longer have the properties of hydrogen. At the most basic level, all organisms are made of a combination of elements. They contain atoms that combine together to form molecules. In multicellular organisms, such as animals, molecules can interact to form cells that combine to form tissues, which make up organs. These combinations continue until entire multicellular organisms are formed.

All matter, whether it be a rock or an organism, is made of atoms. Often, these atoms combine to form molecules. Molecule are chemicals made from two or more atoms bonded together. Some molecules are very simple, like O2, which is comprised of just two oxygen atoms. Some molecules used by organisms, such as DNA, are made of many millions of atoms. All atoms contain protons, electrons, and neutrons (Figure 1 below). The only exception is hydrogen (H), which is made of one proton and one electron. A proton is a positively charged particle that resides in the nucleus (the core of the atom) of an atom and has a mass of 1 and a charge of +1. An electron is a negatively charged particle that travels in the space around the nucleus. In other words, it resides outside of the nucleus. It has a negligible mass and has a charge of –1. Neutrons, like protons, reside in the nucleus of an atom. They have a mass of 1 and no charge. The positive (protons) and negative (electrons) charges balance each other in a neutral atom, which has a net zero charge. 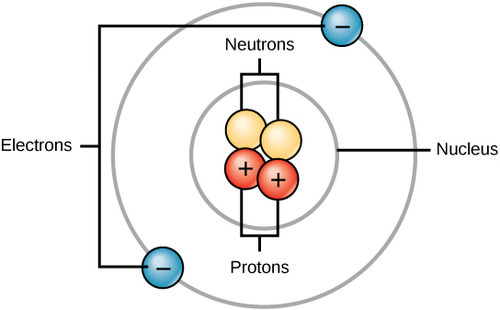 How elements interact with one another depends on the number of electrons and how they are arranged.  When an atom does not contain equal numbers of protons and electrons it is called an ion. Because the number of electrons does not equal the number of protons, each ion has a net charge. For example, if sodium loses an electron, it now has 11 protons and only 10 electrons, leaving it with an overall charge of +1. Positive ions are formed by losing electrons and are called cations. Negative ions are formed by gaining electrons and are called anions. Elemental anionic names are changed to end in -ide. As an example, when chlorine becomes an ion it is referred to as chloride.

Ionic and covalent bonds are strong bonds formed between two atoms.  These bonds hold atoms together in a relatively stable state. Ionic bonds are formed between two oppositely charged ions (an anion and a cation).  Because positive and negative charges attract, these ions are held together much like two oppositely charged magnets would stick together.  Covalent bonds form when electrons are shared between two atoms.  Each atom shares one of their electrons, which then orbits the nuclei of both atoms, holding the two atoms together.  Covalent bonds are the strongest and most common form of chemical bond in organisms. Unlike most ionic bonds, covalent bonds do not dissociate in water.

When oxygen and hydrogen bond, for example, the shared electrons are pulled more strongly toward oxygen and thus farther away from hydrogen’s nucleus. Because the electrons move farther away from hydrogen, it becomes slightly positively charged (δ+). The oxygen becomes slightly negatively charged as the electrons become closer to it (δ–). If two molecules with polar covalent bonds approach one another, they can interact due to the attraction of opposite electrical charges.  For example, the slight positive charge of hydrogen in a water molecule can be attracted to the slight negative charge of oxygen in a different water molecule (Figure 3). This interaction between two polar molecules is called a hydrogen bond. This type of bond is very common in organisms. Notably, hydrogen bonds give water the unique properties that sustain life. If it were not for hydrogen bonding, water would be a gas rather than a liquid at room temperature.

Acids are substances that provide hydrogen ions (H+) and lower pH, whereas bases provide hydroxide ions (OH–) and raise pH. The stronger the acid, the more readily it donates H+. For example, hydrochloric acid and lemon juice are very acidic and readily give up H+ when added to water. Conversely, bases are those substances that readily donate OH–. The OH– ions combine with H+ to produce water, which raises a substance’s pH. Sodium hydroxide and many household cleaners are very alkaline and give up OH– rapidly when placed in water, thereby raising the pH. 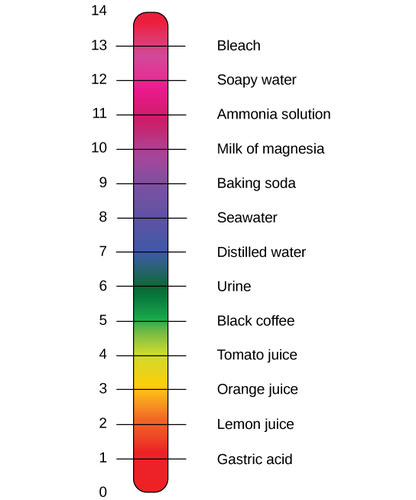 Figure 4. The pH scale measures the amount of hydrogen ions (H+) in a substance. (credit: modification of work by Edward Stevens)

How is it that we can ingest or inhale acidic or basic substances and not die? Buffers are the key. Buffers readily absorb excess H+ or OH–, keeping the pH of the body carefully maintained in the aforementioned narrow range. Carbon dioxide is part of a prominent buffer system in the human body; it keeps the pH within the proper range. This buffer system involves carbonic acid (H2CO3) and bicarbonate (HCO3–) anion. If too much H+ enters the body, bicarbonate will combine with the H+ to create carbonic acid and limit the decrease in pH. Likewise, if too much OH– is introduced into the system, carbonic acid will combine with it to create bicarbonate and limit the increase in pH. While carbonic acid is an important product in this reaction, its presence is fleeting because the carbonic acid is released from the body as carbon dioxide gas each time we breathe. Without this buffer system, the pH in our bodies would fluctuate too much and we would fail to survive.

Besides water, the molecules necessary for life are organic. Organic molecules are those that contain carbon covalently bonded to hydrogen. In addition, they may contain oxygen, nitrogen, phosphorus, sulfur, and additional elements.There are four major classes of organic molecules: carbohydrates, lipids, proteins, and nucleic acids.  Each is an important component of the cell and performs a wide array of functions.

Carbon can form four covalent bonds with other atoms or molecules. The simplest organic carbon molecule is methane (CH4), in which four hydrogen atoms bind to a carbon atom (Figure 5 below).

Proteins are one of the most abundant organic molecules in living systems and have the most diverse range of functions of all macromolecules. They are all polymers of amino acids. The functions of proteins are very diverse because there are 20 different chemically distinct amino acids that form long chains, and the amino acids can be in any order. Proteins can function as enzymes, hormones, contractile fibers,  cytoskeleton rods, and much more.  Enzymes are vital to life because they act as catalyst in biochemical reactions (like digestion). Each enzyme is specific for the substrate (a reactant that binds to an enzyme) upon which it acts. Enzymes can function to break molecular bonds, to rearrange bonds, or to form new bonds.

Nucleic acids are very large molecules that are important to the continuity of life. They carry the genetic blueprint of a cell and thus the instructions for its functionality. The two main types of nucleic acids are deoxyribonucleic acid (DNA) and ribonucleic acid (RNA). DNA is the genetic material found in all organisms, ranging from single-celled bacteria to multicellular mammals. The other type of nucleic acid, RNA, is mostly involved in protein synthesis. The DNA molecules never leave the nucleus, but instead use an RNA intermediary to communicate with the rest of the cell. Other types of RNA are also involved in protein synthesis and its regulation. DNA and RNA are made up of small building blocks known as nucleotides. The nucleotides combine with each other to form a polynucleotide: DNA or RNA. Each nucleotide is made up of three components: a nitrogenous base, a pentose (five-carbon) sugar, and a phosphate. DNA has a beautiful double-helical structure (Figure 6 below). 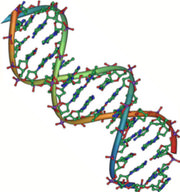 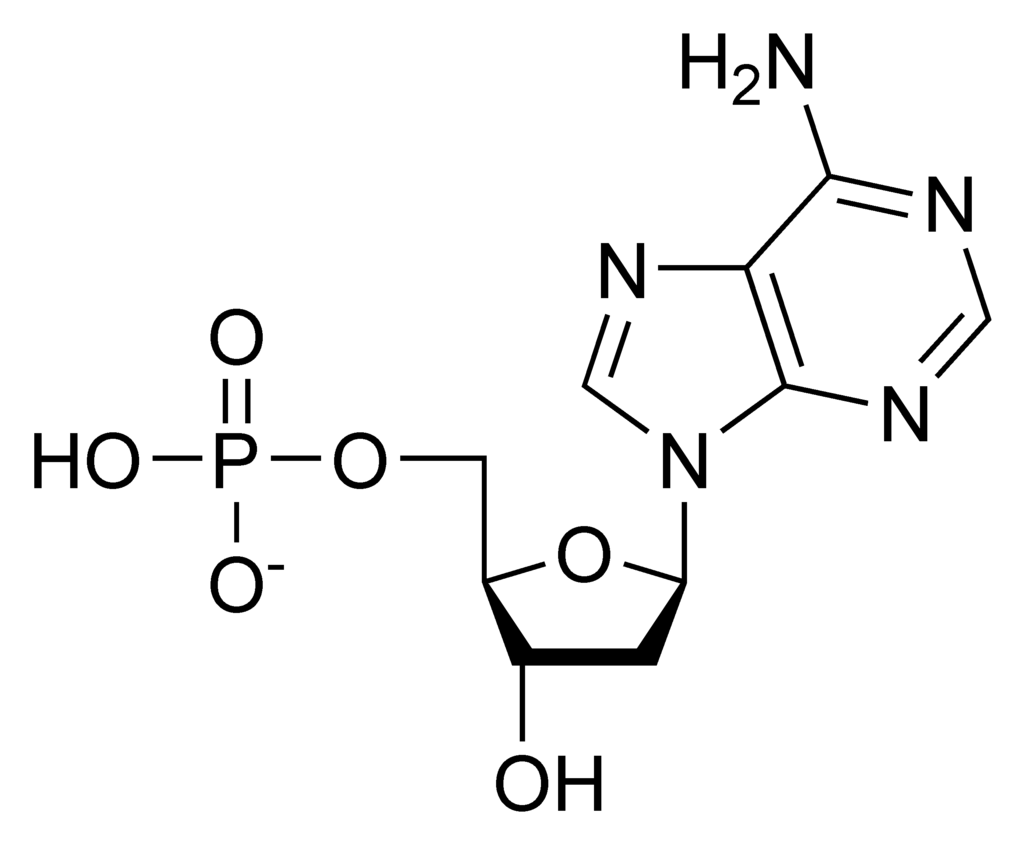 Figure 7. This nucleotide contains the five-carbon sugar deoxyribose (at center), a nitrogenous base (upper right), and one phosphate group (left). Credit:This work is in the Public Domain, CC0 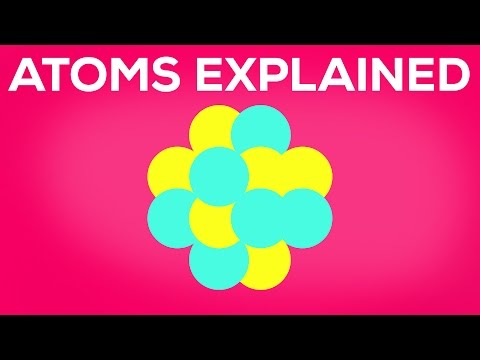 Figure 8. A video that provides some wicked-awesome information about atoms.

Concepts of Biology by OpenStax is licensed under CC BY 4.0. Modified from original by Matthew R. Fisher.