Virtually every task performed by living organisms requires energy. Nutrients and other molecules are imported into the cell to meet these energy demands. For example, energy is required for the synthesis and breakdown of molecules, as well as the transport of molecules into and out of cells. In addition, processes such as ingesting and breaking down food, exporting wastes and toxins, and movement of the cell all require energy.

Scientists use the term bioenergetics to describe the concept of energy flow through living systems, such as cells. Cellular processes such as the building and breaking down of complex molecules occur through step-wise chemical reactions. Some of these chemical reactions are spontaneous and release energy, whereas others require energy to proceed. Together, all of the chemical reactions that take place inside cells, including those that consume or generate energy, are referred to as the cell’s metabolism.

From where, and in what form, does this energy come? How do living cells obtain energy, and how do they use it? This section will discuss different forms of energy and the physical laws that govern energy transfer. 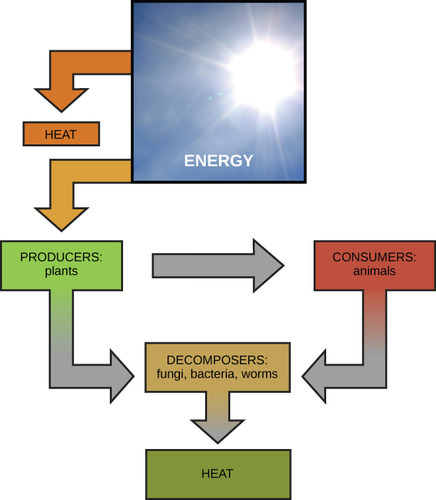 Figure 1. Ultimately, most life forms get their energy from the sun. Plants use photosynthesis to capture sunlight, and herbivores eat the plants to obtain energy. Carnivores eat the herbivores, and eventual decomposition of plant and animal material contributes to the nutrient pool.

Thermodynamics refers to the study of energy and energy transfer involving physical matter. The matter relevant to a particular case of energy transfer is called a system, and everything outside of that matter is called the surroundings. For instance, when heating a pot of water on the stove, the system includes the stove, the pot, and the water. Energy is transferred within the system (between the stove, pot, and water). There are two types of systems: open and closed. In an open system, energy can be exchanged with its surroundings. The stovetop system is open because heat can be lost to the air. A closed system cannot exchange energy with its surroundings.

Biological organisms are open systems. Energy is exchanged between them and their surroundings as they use energy from the sun to perform photosynthesis or consume energy-storing molecules and release energy to the environment by doing work and releasing heat. Like all things in the physical world, energy is subject to physical laws. The laws of thermodynamics govern the transfer of energy in and among all systems in the universe. In general, energy is defined as the ability to do work, or to create some kind of change. Energy exists in different forms: electrical energy, light energy, mechanical energy, and heat energy are all different types of energy. To appreciate the way energy flows into and out of biological systems, it is important to understand two of the physical laws that govern energy.

The first law of thermodynamics states that the total amount of energy in the universe is constant and conserved. In other words, there has always been, and always will be, exactly the same amount of energy in the universe. Energy exists in many different forms. According to the first law of thermodynamics, energy may be transferred from place to place or transformed into different forms, but it cannot be created or destroyed. The transfers and transformations of energy take place around us all the time. Light bulbs transform electrical energy into light and heat energy. Gas stoves transform chemical energy from natural gas into heat energy. Plants perform one of the most biologically useful energy transformations on earth: that of converting the energy of sunlight to chemical energy stored within organic molecules (Figure 2 below).

The challenge for all living organisms is to obtain energy from their surroundings in forms that are usable to perform cellular work. Cells have evolved to meet this challenge. Chemical energy stored within organic molecules such as sugars and fats is transferred and transformed through a series of cellular chemical reactions into energy within molecules of ATP (adenosine triphosphate). Energy in ATP molecules is easily accessible to do work. Examples of the types of work that cells need to do include building complex molecules, transporting materials, powering the motion of cilia or flagella, and contracting muscles to create movement. 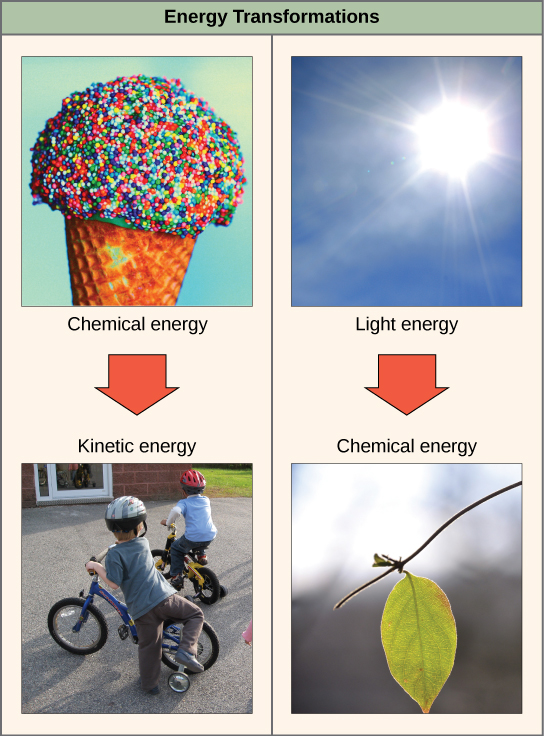 A living cell’s primary tasks of obtaining, transforming, and using energy to do work may seem simple. However, the second law of thermodynamics explains why these tasks are harder than they appear. All energy transfers and transformations are never completely efficient. In every energy transfer, some amount of energy is lost in a form that is unusable. In most cases, this form is heat energy.

An important concept in physical systems is that of order and disorder. The more energy that is lost by a system to its surroundings, the less ordered and more random the system is. Scientists refer to the measure of randomness or disorder within a system as entropy. High entropy means high disorder and low energy. Molecules and chemical reactions have varying entropy as well. For example, entropy increases as molecules at a high concentration in one place diffuse and spread out. The second law of thermodynamics says that energy will always be lost as heat in energy transfers or transformations. Living things are highly ordered, requiring constant energy input to be maintained in a state of low entropy.