2.3 A Cell is the Smallest Unit of Life

Close your eyes and picture a brick wall. What is the basic building block of that wall? It is a single brick, of course. Like a brick wall, your body is composed of basic building blocks and the building blocks of your body are cells. Your body has many kinds of cells, each specialized for a specific purpose. Just as a home is made from a variety of building materials, the human body is constructed from many cell types. For example, bone cells help to support and protect the body. Cells of the immune system fight invading bacteria. And red blood cells carry oxygen throughout the body. Each of these cell types plays a vital role during the growth, development, and day-to-day maintenance of the body. In spite of their enormous variety, however, all cells share certain fundamental characteristics.

The microscopes we use today are far more complex than those used in the 1600s by Antony van Leeuwenhoek, a Dutch shopkeeper who had great skill in crafting lenses. Despite the limitations of his now-ancient lenses, van Leeuwenhoek observed the movements of single-celled organism and sperm, which he collectively termed “animalcules.” In a 1665 publication called Micrographia, experimental scientist Robert Hooke coined the term “cell” (from the Latin cella, meaning “small room”) for the box-like structures he observed when viewing cork tissue through a lens. In the 1670s, van Leeuwenhoek discovered bacteria and protozoa. Later advances in lenses and microscope construction enabled other scientists to see different components inside cells.

By the late 1830s, botanist Matthias Schleiden and zoologist Theodor Schwann were studying tissues and proposed the unified cell theory, which states that all living things are composed of one or more cells, that the cell is the basic unit of life, and that all new cells arise from existing cells. These principles still stand today. There are many types of cells, and all are grouped into one of two broad categories: prokaryotic and eukaryotic. Animal, plant, fungal, and protist cells are classified as eukaryotic, whereas bacteria and archaea cells are classified as prokaryotic.

All cells share four common components: 1) a plasma membrane, an outer covering that separates the cell’s interior from its surrounding environment; 2) cytoplasm, consisting of a jelly-like region within the cell in which other cellular components are found; 3) DNA, the genetic material of the cell; and 4) ribosomes, particles that synthesize proteins. However, prokaryotes differ from eukaryotic cells in several ways.

A prokaryotic cell is a simple, single-celled (unicellular) organism that lacks a nucleus, or any other membrane-bound organelle. We will shortly come to see that this is significantly different in eukaryotes. Prokaryotic DNA is found in the central part of the cell: a darkened region called the nucleoid (Figure 1 below). 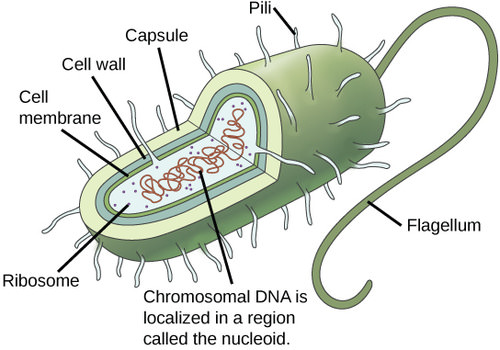 Unlike Archaea and eukaryotes, bacteria have a cell wall made of peptidoglycan (molecules comprised of sugars and amino acids) and many have a polysaccharide capsule. The cell wall acts as an extra layer of protection, helps the cell maintain its shape, and prevents dehydration. The capsule enables the cell to attach to surfaces in its environment. Some prokaryotes have flagella, pili, or fimbriae. Flagella are used for locomotion. Pili are used to exchange genetic material during a type of reproduction called conjugation. Fimbriae are protein appendages used by bacteria to attach to other cells.

At 0.1–5.0 µm in diameter, most prokaryotic cells are significantly smaller than eukaryotic cells, which have diameters ranging from 10–100 µm (Figure 2 below). The small size of prokaryotes allows ions and organic molecules that enter them to quickly spread to other parts of the cell. Similarly, any wastes produced within a prokaryotic cell can quickly move out. However, larger eukaryotic cells have evolved different structural adaptations to enhance cellular transport. Indeed, the large size of these cells would not be possible without these adaptations. In general, cell size is limited because volume increases much more quickly than does cell surface area. As a cell becomes larger, it becomes more and more difficult for the cell to acquire sufficient materials to support the processes inside the cell, because the relative size of the surface area through which materials must be transported declines. 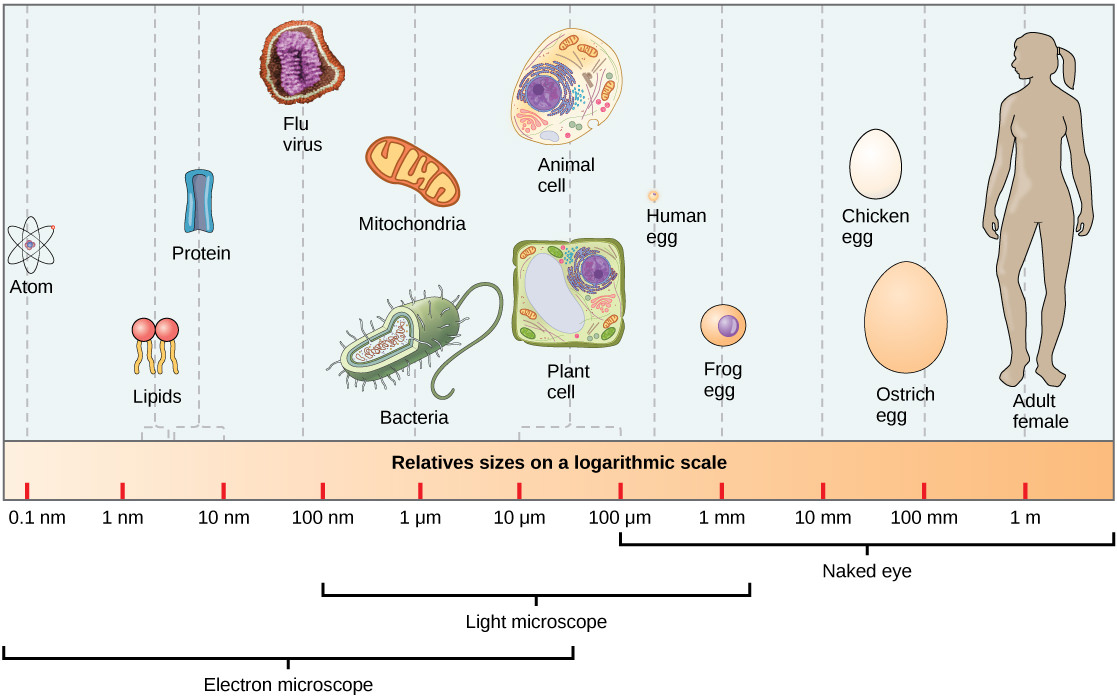 Despite their fundamental similarities, there are some striking differences between animal and plant cells (Figure 3). Animal cells have centrioles, centrosomes, and lysosomes, whereas plant cells do not. Plant cells have a rigid cell wall that is external to the plasma membrane, chloroplasts, plasmodesmata, and plastids used for storage, and a large central vacuole, whereas animal cells do not. 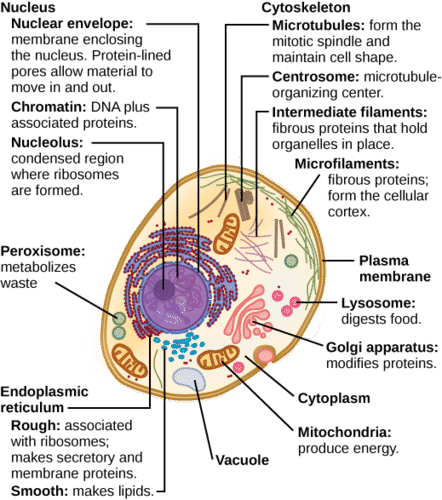 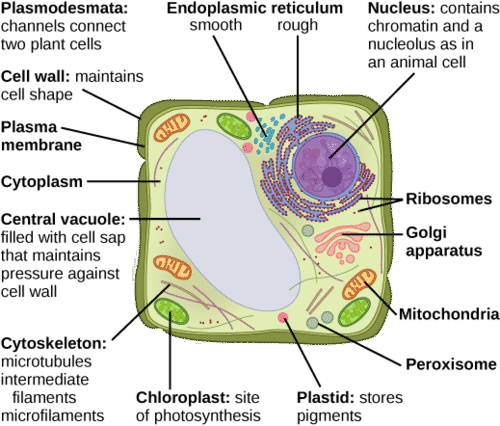 From an ecological perspective, chloroplasts are a particularly important type of organelle because they perform photosynthesis. Photosynthesis forms the foundation of food chains in most ecosystems. Chloroplasts are only found in eukaryotic cells such as plants and algae. During photosynthesis, carbon dioxide, water, and light energy are used to make glucose and molecular oxygen. One major difference between algae/plants and animals is that plants/algae are able to make their own food, like glucose, whereas animals must obtain food by consuming other organisms.

Chloroplasts have outer and inner membranes, but within the space enclosed by a chloroplast’s inner membrane is a set of interconnected and stacked, fluid-filled membrane sacs called thylakoids (Figure 4 below). Each stack of thylakoids is called a granum (plural = grana). The fluid enclosed by the inner membrane and surrounding the grana is called the stroma. Each structure within the chloroplast has an important function, which is enabled by its particular shape. A common theme in biology is that form and function are interrelated. For example, the membrane-rich stacks of the thylakoids provide ample surface area to embed the proteins and pigments that are vital to photosynthesis.

Essentials of Environmental Science  by Kamala Doršner is licensed under CC BY 4.0. Modified from the original by Matthew R. Fisher.