by Saul McLeod [1]
used with permission

One of the most famous studies of obedience in psychology was carried out by Stanley Milgram, a psychologist at Yale University. He conducted an experiment focusing on the conflict between obedience to authority and personal conscience.

Milgram (1963) examined justifications for acts of genocide offered by those accused at the World War II, Nuremberg War Criminal trials. Their defense often was based on “obedience”—that they were just following orders from their superiors.

The experiments began in July 1961, a year after the trial of Adolf Eichmann in Jerusalem. Milgram devised the experiment to answer the question:

Could it be that Eichmann and his million accomplices in the Holocaust were just following
orders? Could we call them all accomplices?” (Milgram, 1974).

Milgram (1963) wanted to investigate whether Germans were particularly obedient to authority figures as this was a common explanation for the Nazi killings in World War II. Milgram selected participants for his experiment by newspaper advertising for male participants to take part in a study of learning at Yale University.

Milgram (1963) was interested in researching how far people would go in obeying an instruction if it involved harming another person. Stanley Milgram was interested in how easily ordinary people could be influenced into committing atrocities, for example, Germans in WWII.

Volunteers were recruited for a lab experiment investigating “learning” (re: ethics: deception). Participants were 40 males, aged between 20 and 50, whose jobs ranged from unskilled to professional, from the New Haven area. They were paid $4.50 for just turning up. 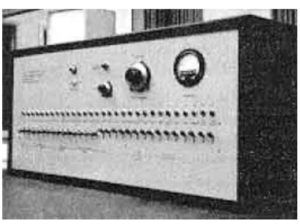 They drew straws to determine their roles—learner or teacher—although this was fixed and the confederate was always the learner. There was also an “experimenter” dressed in a gray lab coat, played by an actor (not Milgram).

Two rooms in the Yale Interaction Laboratory were used – one for the learner (with an electric chair) and another for the teacher and experimenter with an electric shock generator. 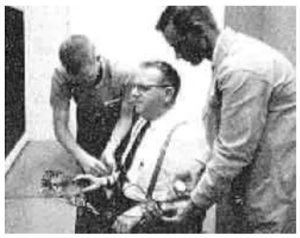 The “learner” (Mr. Wallace) was strapped to a chair with electrodes. After he has learned a list of word pairs given him to learn, the “teacher” tests him by naming a word and asking the learner to recall its partner/pair from a list of four possible choices.

The teacher is told to administer an electric shock every time the learner makes a mistake, increasing the level of shock each time. There were 30 switches on the shock generator marked from 15 volts (slight shock) to 450 (danger – severe shock).

The learner gave mainly wrong answers (on purpose), and for each of these, the teacher gave him an electric shock. When the teacher refused to administer a shock, the experimenter was to give a series of orders/prods to ensure they continued.

There were four prods and if one was not obeyed, then the experimenter (Mr. Williams) read out the next prod, and so on. 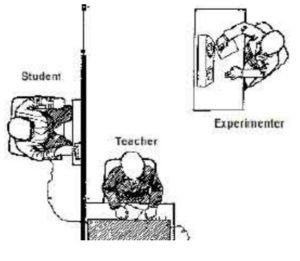 Milgram did more than one experiment—he carried out 18 variations of his study. All he did was alter the situation (IV) to see how this affected obedience (DV).

Ordinary people are likely to follow orders given by an authority figure, even to the extent of killing an innocent human being. Obedience to authority is ingrained in us all from the way we are brought up.

People tend to obey orders from other people if they recognize their authority as morally right and/or legally based. This response to legitimate authority is learned in a variety of situations, for example in the family, school, and workplace.

Milgram summed up in the article “The Perils of Obedience” (Milgram 1974), writing:

‘The legal and philosophic aspects of obedience are of enormous import, but they say very little about how most people behave in concrete situations. I set up a simple experiment at Yale University to test how much pain an ordinary citizen would inflict on another person simply because he was ordered to by an experimental scientist. Stark authority was pitted against the subjects’ [participants’] strongest moral imperatives against hurting others, and, with the subjects’ [participants’] ears ringing with the screams of the victims, authority won more often than not. The extreme willingness of adults to go to almost any lengths on the command of an authority constitutes the chief finding of the study and the fact most urgently demanding explanation.’

Milgram (1974) explained the behavior of his participants by suggesting that people have two states of behavior when they are in a social situation:

Milgram suggested that two things must be in place for a person to enter the agentic state:

Agency theory says that people will obey an authority when they believe that the authority will take responsibility for the consequences of their actions. This is supported by some aspects of Milgram’s evidence.

For example, when participants were reminded that they had responsibility for their own actions, almost none of them were prepared to obey. In contrast, many participants who were refusing to go on did so if the experimenter said that he would take responsibility.

The Milgram experiment was carried out many times whereby Milgram (1965) varied the basic procedure (changed the IV). By doing this Milgram could identify which factors affected obedience (the DV).

Obedience was measured by how many participants shocked to the maximum 450 volts (65 precent in the original study). In total 636 participants have been tested in 18 different variation studies.

In the original baseline study – the experimenter wore a gray lab coat as a symbol of his authority (a kind of uniform). Milgram carried out a variation in which the experimenter was called away because of a phone call right at the start of the procedure.

The role of the experimenter was then taken over by an ‘ordinary member of the public’ (a confederate) in everyday clothes rather than a lab coat. The obedience level dropped to 20 percent.

The experiment was moved to a set of run down offices rather than the impressive Yale University. Obedience dropped to 47.5 percent. This suggests that status of location effects obedience.

When participants could instruct an assistant (confederate) to press the switches, 92.5 percent shocked to the maximum 450 volts. When there is less personal responsibility obedience increases. This relates to Milgram’s Agency Theory.

The teacher had to force the learner’s hand down onto a shock plate when they refuse to participate after 150 volts. Obedience fell to 30 percent.

The participant is no longer buffered / protected from seeing the consequences of their actions.

Two other participants (confederates) were also teachers but refused to obey. Confederate 1 stopped at 150 volts, and confederate 2 stopped at 210 volts.

The presence of others who are seen to disobey the authority figure reduces the level of obedience to 10 percent.

It is easier to resist the orders from an authority figure if they are not close by. When the experimenter instructed and prompted the teacher by telephone from another room, obedience fell to 20.5 percent.

Many participants cheated and missed out shocks or gave less voltage than ordered to by the experimenter. The proximity of authority figure affects obedience.

The Milgram studies were conducted in laboratory type conditions, and we must ask if this tells us much about real-life situations. We obey in a variety of real-life situations that are far more subtle than instructions to give people electric shocks, and it would be interesting to see what factors operate in everyday obedience. The sort of situation Milgram investigated would be more suited to a military context.

Orne & Holland (1968) accused Milgram’s study of lacking ‘experimental realism,’’ i.e.,’ participants might not have believed the experimental set-up they found themselves in and knew the learner wasn’t receiving electric shocks.

Milgram’s findings have been replicated in a variety of cultures and most lead to the same conclusions as Milgram’s original study and in some cases see higher obedience rates.

However, Smith & Bond (1998) point out that with the exception of Jordan (Shanab & Yahya, 1978), the majority of these studies have been conducted in industrialized Western cultures and we should be cautious before we conclude that a universal trait of social behavior has been identified.

Milgram argued that they are justified as the study was about obedience so orders were necessary. Milgram pointed out that although the right to withdraw was made partially difficult, it was possible as 35 percent of participants had chosen to withdraw.

Note that you may download a copy of this article as a .pdf from the website listed in the attributions below.