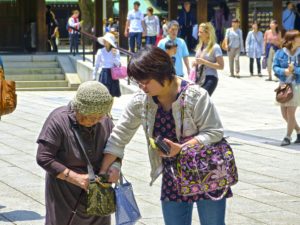 The aging experience differs by country, depending on many variables such as how a particular society views the elderly, what services all levels of government are able and wish to fund, what the relative portion of elderly is compared to the rest of the population, and more.

Japan has one of the highest life expectancies in the world, as well as one of the highest percentages of elderly in their population. According to The Japan Times, in 2018, slightly over 28 percent of the overall population in Japan was over 65 percent. “The number of Japanese aged 90 or older reached 2.31 million [in 2018], including over 71,000 centenarians. The National Institute of Population and Social Security Research projects that Japan’s elderly will make up 30.0 percent of the population in 2025 and 35.3 percent in 2040.” [1] [2]

Because of numbers as well as culture, the aging experience in Japan differs in many ways from that in the United States.

The following video and article highlight how Japan is dealing with an aging population. Make sure to view and read.

Although Japan has been innovative in dealing with its aging population, it’s low birth rate combined with its increasing percentage of elderly create unique challenges. The following video and article expand on one particular challenge Japan faces with its elderly population. Make sure to view and read.

Article from BBC News: Why Some Japanese Pensioners Want to Go to Jail (31 January 2019)

[2] In comparison, according to the Population Reference Bureau, while Japan is the country with the highest population of older adults aged 65+, the U.S. ranks 36th, based on statistics in 2020. “Countries with the Oldest Populations in the World.” PRB, 23 March 2020, https://www.prb.org/countries-with-the-oldest-populations/.