A paraphrase re-states information and ideas from a source using your own wording and sentence structure. Paraphrasing is similar to summarizing; however, summaries condense the original down to the essential or main ideas, while paraphrases simply re-state the original portion of text.  A paraphrase is usually about the same length as the original piece of text. 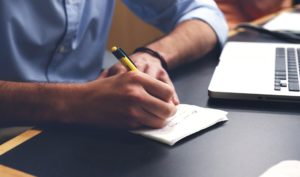 So why paraphrase?  Paraphrasing offers a way to maintain your own writing style and voice throughout the writing.  It helps cut down on the number of different styles from different sources, creating a sleeker, easier reading experience for your reader.  Most of all, though, paraphrasing is a means of helping you understand what your sources are saying, in order to incorporate that information into your own writing.  You have to understand the source’s ideas fully in order to rewrite them clearly.

When you paraphrase, make sure not to simply substitute one word for another, retaining the same sentence structure.  Paraphrasing requires you to use your own sentence structures as well as words, so that you are not inadvertently plagiarizing the source.

In general, it is best to paraphrase when:

Make sure that you understand the original text that you intend to paraphrase.  Rewrite that text at least twice, in your own words.  After the first rewriting, set the paraphrase aside for a short time.  When you go back to it, you’ll most likely see that you’ve tended to retain some of the original text’s wording and sentence structure.  On a second (or third, or fourth) rewriting, try to make the language and sentence structure your own, while retaining the meaning of the original text. If you find that the original text uses a key word or phrase that you don’t want to rewrite, know that you can always include it in quotation marks within your paraphrase.  Finally, make sure to attribute the paraphrase at the start (e.g., “According to…”) and include a citation at the end.  Your readers should be able to distinguish your own information from paraphrased information, and the attribution and citation signal the beginning and end of the paraphrase.

The original passage, from Benjamin Franklin’s “Speech to the [Constitutional] Convention”:

Mr. President, I confess that I do not entirely approve of this Constitution at present; but, Sir, I am not sure I shall never approve it; for, having lived long, I have experienced many instances of being obliged, by better information or fuller consideration, to change my opinions even on important subjects, which I once thought right, but found to be otherwise.

Benjamin Franklin tells the president of the Constitutional Convention that he does not entirely approve of the Constitution at the present time, but that he is not sure he will never approve it. He points out that he has lived a long time, and in his experience there have been many instances when better information of fuller consideration of a topic have made him change his opinions on important subjects that he had originally thought to be correct. He points out that he finds himself more likely to doubt his own judgment the older he gets, and contrasts his knowledge of his own fallibility with other people’s conviction of their infallibility.

The problem with this paraphrase is in the way that it reproduces distinctive phrasing, sentence structure, and ordering of ideas. Note that the bolded parts of the paragraph actually reproduce Franklin’s wording exactly, and that the order of information in the paraphrase is essentially the same as in the original. Notice the end of the paraphrase also contains extra information that is not present in the original passage.
Now consider this GOOD revised version:

Benjamin Franklin tells the president of the Constitutional Convention that although he is currently uncertain about the Constitution they have created, he may eventually acknowledge its effectiveness. This is due, he explains, to new information or a different understanding of similarly important topics that have caused him to change his mind in the past.

“America today has veered too far in the direction of formal testing without adequate consideration of the costs and limitations of an exclusive emphasis on that approach.”

Paraphrasing Attempt 1: America has now gone too far toward formal testing, without realizing the costs and limitations of exclusively emphasizing that approach (Gardner 179).

Show Answer
Although the source is cited, the paraphrasing is too close to the original statement as it retained too much of the original wording and sentence structure.

Paraphrasing Attempt 2: In the United States, the education system places too much emphasis on formal testing, overlooking the limitations and expenses imposed when that assessment strategy is employed exclusively (Gardner 179).

Show Answer
This paraphrase is different enough from the original source that it would not be considered plagiarism, so long as Gardner is credited.

“Scientists and policymakers generally agree that the likelihood of flooding in the UK will increase as a result of climate change. It is also accepted that sensible land use and development planning plays a role in the management of flood risk, while allowing necessary development to continue” (Dept…Government, 2006, Evans et al., 2004; Thorne et al., 2007).

Scientists and policymakers agree that climate change means that the likelihood of UK flooding will increase. It is also agreed that the role of sensible land use and development planning are important in the management of flood risk, also allowing necessary development to continue (Dept…Government, 2006; Evans et al., 2004; Thorne et al., 2007).

Answer these questions about the paraphrase example from above to decide if it is a good or bad paraphrase.

1. Has the student changed a lot of the words from the original passage?

Show Answer
No, the student did not change a lot of the words in the paraphrase. It is almost an exact replica of the original text, with only a few words changed here and there. A good paraphrase should represent your own interpretation without changing the original meaning.

2. Has the student changed the word order and structure compared to the original passage?

3. Has the student included a citation for the information?

Show Answer
Yes, the student did include a citation for the information (in APA style). However, even with the citation, this paraphrase would be considered plagiarism because it is so similar to the original passage.

4. Overall, do you think this is a good paraphrase?

Show Answer
This is not a good example of a proper paraphrase. Even though the information is cited in the text of the paraphrase, it is not substantially different from the original text. It does not reflect that the student understood and interpreted the information. 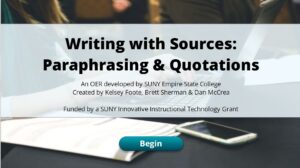 View Writing with Sources: Paraphrasing & Quotation, an interactive resource for a review and self-test on paraphrasing and quoting sources. (Please click on the text link.)