Jordan is a constitutional monarchy known as one of the safest and most hospitable countries in the region, accepting refugees from almost all surrounding conflicts as early as 1948, with an estimated 2.1 million Palestinians and 1.4 million Syrian refugees residing in there.

Describe the Jordanian monarchy and some characteristics of the regime

constitutional monarchy
A form of monarchy in which the sovereign exercises authority in accordance with a written or unwritten constitution. It differs from absolute monarchy (in which a monarch holds absolute power), in that the monarchs are bound to exercise their powers and authorities within the limits prescribed by an established legal framework.
Organisation of Islamic Cooperation
An international organization founded in 1969 consisting of 57 member states, with a collective population of over 1.6 billion as of 2008. The organization states that it is “the collective voice of the Muslim world” and works to “safeguard and protect the interests of the Muslim world in the spirit of promoting international peace and harmony.”
Gulf War
A war waged by coalition forces from 34 nations led by the United States against Iraq in response to Iraq’s invasion and annexation of Kuwait.

Jordan, officially The Hashemite Kingdom of Jordan, is an Arab kingdom in Western Asia on the East Bank of the Jordan River. Jordan is bordered by Saudi Arabia to the east and south, Iraq to the northeast, Syria to the north, Israel, Palestine, and the Dead Sea to the west and the Red Sea to its extreme southwest. Jordan is strategically located at the crossroads of Asia, Africa, and Europe. The capital, Amman, is Jordan’s most populous city as well as the country’s economic, political, and cultural center.

What is now Jordan has been inhabited by humans since the Paleolithic period. Three stable kingdoms emerged there at the end of the Bronze Age: Ammon, Moab, and Edom. Later rulers include the Nabataean Kingdom, the Roman Empire, and the Ottoman Empire. After the Great Arab Revolt against the Ottomans in 1916 during World War I, the Ottoman Empire was partitioned by Britain and France. The Emirate of Transjordan was established in 1921 by then Emir Abdullah I and became a British protectorate. In 1946, Jordan became an independent state officially known as The Hashemite Kingdom of Transjordan. Jordan captured the West Bank during the 1948 Arab–Israeli War and the name of the state was changed to The Hashemite Kingdom of Jordan in 1949. Jordan is a founding member of the Arab League and the Organisation of Islamic Cooperation, and is one of two Arab states to have signed a peace treaty with Israel. The country is a constitutional monarchy, but the king holds wide executive and legislative powers.

Jordan is a relatively small, semi-arid, almost landlocked country with a population numbering at 9.5 million. Sunni Islam, practiced by around 92% of the population, is the dominant religion and coexists with an indigenous Christian minority. Jordan is considered among the safest Arab countries in the Middle East and has avoided long-term terrorism and instability. In the midst of surrounding turmoil, it has been greatly hospitable, accepting refugees from almost all surrounding conflicts as early as 1948, with an estimated 2.1 million Palestinians and 1.4 million Syrian refugees residing in the country. The kingdom is also a refuge to thousands of Iraqi Christians fleeing the Islamic State. While Jordan continues to accept refugees, the recent large influx from Syria placed substantial strain on national resources and infrastructure.

Jordan is classified as a country of “high human development” with an “upper middle income” economy. The Jordanian economy, one of the smallest in the region, is attractive to foreign investors because of its skilled workforce. The country is a major tourist destination, and attracts medical tourism to its well-developed health sector. Nonetheless, a lack of natural resources, large flow of refugees, and regional turmoil have crippled economic growth.

Jordan is a constitutional monarchy, but the King holds wide executive and legislative powers. He serves as head of state and commander-in-chief and appoints the prime minister and heads of security directorates. The prime minister is free to choose his own cabinet and regional governors. However, the king may dissolve parliament and dismiss the government.

The Parliament of Jordan consists of two chambers: the upper Senate and the lower House of Representatives. All 65 members of the Senate are directly appointed by the king, they are usually veteran politicians or held previous positions in the House of Representatives or government. The 130 members of the House of Representatives are elected through proportional representation in 23 constituencies on nationwide party lists for a 4-year election cycle. Minimum quotas exist in the House of Representatives for women (15 seats, though they won 20 seats in the 2016 election), Christians (9 seats), and Circassians and Chechens (3 seats). Three constituencies are allocated for the Bedouins of the northern, central, and southern Badias. The king appoints and may dismiss all judges by decree, approves amendments to the constitution after passing by both parliaments, declares war, and acts as the supreme leader of the armed forces. Cabinet decisions, court judgments, and the national currency are issued in his name. The Cabinet, led by a prime minister, was formerly appointed by the king, but following the 2011 Jordanian protests, King Abdullah agreed to an elected cabinet. The cabinet is responsible to the Chamber of Deputies on matters of general policy; a two-thirds vote of “no confidence” by the Chamber can force the cabinet to resign.

King Hussein ruled Jordan from 1953 to 1999, surviving a number of challenges to his rule, drawing on the loyalty of his military, and serving as a symbol of unity and stability for both the Jordanians and Palestinian communities in Jordan. King Hussein ended martial law in 1989 and ended suspension on political parties that was initiated following the loss of the West Bank to Israel and to preserve the status quo in Jordan. In 1989 and 1993, Jordan held free and fair parliamentary elections. Controversial changes in the election law led Islamist parties to boycott the 1997, 2011, and 2013 elections.

King Abdullah II succeeded his father Hussein following the latter’s death in February 1999. Abdullah moved quickly to reaffirm Jordan’s peace treaty with Israel and its relations with the United States. During his first year in power, he refocused the government’s agenda on economic reform.

Jordan’s continuing structural economic difficulties, burgeoning population, and open political environment led to the emergence of various political parties. Moving toward greater independence, Jordan’s parliament has investigated corruption charges against several regime figures and become the major forum in which differing political views, including those of political Islamists, are expressed.

On February 1, 2012, it was announced that King Abdullah had dismissed his government. This has been interpreted as a pre-emptive move in the context of the Tunisian Jasmine Revolution and unfolding events in nearby Egypt. 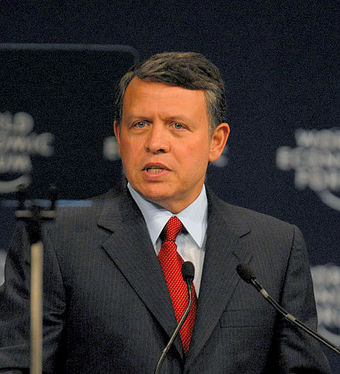 King Abdullah of Jordan: The current King of Jordan is Abdullah II, who assumed the throne in 1999.

The kingdom has followed a pro-Western foreign policy and maintained close relations with the United States and the United Kingdom. During the first Gulf War (1990), these relations were damaged by Jordan’s neutrality and its maintenance of relations with Iraq. Later, Jordan restored its relations with Western countries through its participation in the enforcement of UN sanctions against Iraq and in the Southwest Asia peace process. After King Hussein’s death in 1999, relations between Jordan and the Persian Gulf countries greatly improved.

Jordan is a key ally of the U.S. and UK and together with Egypt, is one of only two Arab nations to have signed peace treaties with Israel, Jordan’s direct neighbor. Jordan supports Palestinian statehood through the two-state solution. The ruling Hashemite family has had custodianship over holy sites in Jerusalem since the beginning of the 20th century, a position reinforced in the Israel-Jordan peace treaty. Turmoil in Jerusalem’s Al-Aqsa mosque between Israelis and Palestinians created tensions between Jordan and Israel concerning the former’s role in protecting the Muslim and Christian sites in Jerusalem.

Jordan is a founding member of the Organisation of Islamic Cooperation and of the Arab League.