During the 1948 Palestine War, around 85% (720,000 people) of the Palestinian Arab population of what became Israel were expelled from their homes, fleeing to the West Bank, the Gaza Strip, Lebanon, Syria, and Jordan.

Trace the Palestinian refugee populations in places such as Jordan

Palestinian Exodus of 1948
Also known as the Nakba, this event occurred when more than 700,000 Palestinian Arabs fled or were expelled from their homes during the 1948 Palestine war.
refugee
A displaced person who has been forced to cross national boundaries and cannot return home safely because of persecution for reasons of race, religion, nationality, membership of a particular social group or political opinion.
Gaza Strip
A small, self-governing Palestinian territory on the eastern coast of the Mediterranean Sea, bordering Egypt on the southwest for 6.8 miles and Israel on the east and north along a 32-mile border. Together with the West Bank, it comprises the territories claimed by the Palestinians as the State of Palestine.
West Bank
A landlocked territory near the Mediterranean coast of Western Asia, forming the bulk of the Palestinian territories. It shares a border with Jordan across the Jordan River.

During the 1947–1948 Civil War in Mandatory Palestine and the 1948 Arab–Israeli War that followed, around 750,000 Palestinian Arabs (85% of the population) fled or were expelled from their homes, out of approximately 1.2 million Arabs living in former British Mandate of Palestine. This event was known as the Nakba (Arabic for “disaster” or “catastrophe”).

This number did not include displaced Palestinians inside Israeli-held territory. More than 400 Arab villages and about ten Jewish villages and neighborhoods were depopulated during the Arab-Israeli conflict, most of during 1948. According to estimates based on earlier census, the total Muslim population in Palestine was 1,143,336 in 1947. After the war, around 156,000 Arabs remained in Israel and became Israeli citizens.

The causes of the exodus are a subject of fundamental disagreement between historians. Factors involved include Jewish military advances, destruction of Arab villages, psychological warfare, and fears of another massacre by Zionist militias after the Deir Yassin massacre, which caused many to leave out of panic; direct expulsion orders by Israeli authorities; the voluntary self-removal of the wealthier classes; collapse in Palestinian leadership and Arab evacuation orders; and an unwillingness to live under Jewish control.

In the years after, a series of laws passed by the first Israeli government prevented Arabs from returning to their homes or claiming their property. Most remained refugees, as do their descendants. The expulsion of the Palestinians has since been described by some historians as ethnic cleansing, while others dispute this charge.

The Palestinian refugee problem and debate about the Palestinian right of return are also major issues of the Arab-Israeli conflict. Palestinians and their supporters have staged annual demonstrations and commemorations on May 15 of each year, which is known to them as “Nakba Day.” The popularity and number of participants in these annual Nakba demonstrations has varied over time. 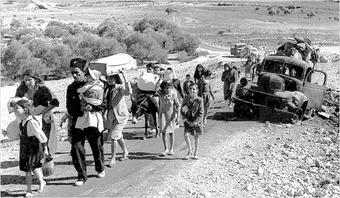 Life After the Exodus

Refugee status was also passed to their descendants, who were also largely denied citizenship in Arab states except in Jordan. The Arab League instructed its members to deny Palestinians citizenship “to avoid dissolution of their identity and protect their right of return to their homeland.” More than 1.4 million Palestinians still live in 58 recognized refugee camps, while more than 5 million Palestinians live outside Israel and the Palestinian territories.

In a 2007 study, Amnesty International denounced the “appalling social and economic condition” of Palestinians in Lebanon. Until 2005, Palestinians were forbidden to work in over 70 jobs because they do not have Lebanese citizenship, but this was later reduced to around 20 as of 2007 after liberalization laws. In 2010, Palestinians were granted the same rights to work as other foreigners in the country.

Lebanon gave citizenship to about 50,000 Christian Palestinian refugees during the 1950s and 1960s. In the mid-1990s, about 60,000 Shiite Muslim refugees were granted citizenship. This caused protest from Maronite authorities, leading to citizenship being given to all Christian refugees who were not already citizens.