The “Jewish state” is a political term used to describe the nation state of Israel, the homeland of the Jewish people, but the religious versus secular usage of the term and its possible exclusionary implications have been debated since the founding of Israel in 1948.

Define and describe “the Jewish State”

Eretz-Israel
The traditional Jewish name for an area of indefinite geographical extension in the Southern Levant. Related biblical, religious, and historical English terms include the Land of Canaan, the Promised Land, the Holy Land, and Palestine.
Nuremberg Laws
Antisemitic laws in Nazi Germany introduced on September 15, 1935, by the Reichstag at a special meeting convened at the annual Nuremberg Rally of the Nazi Party (NSDAP). The two laws were the Law for the Protection of German Blood and German Honour, which forbade marriages and extramarital intercourse between Jews and Germans and the employment of German females under 45 in Jewish households, and the Reich Citizenship Law, which declared that only those of German or related blood were eligible to be Reich citizens. The remainder were classed as state subjects, without citizenship rights.
David Ben-Gurion
The primary founder of the State of Israel and the first Prime Minister of Israel. On May 14, 1948, he formally proclaimed the establishment of the State of Israel and was the first to sign the Israeli Declaration of Independence, which he helped write. He led Israel during the 1948 Arab–Israeli War and united the various Jewish militias into the Israel Defense Forces (IDF). Subsequently, he became known as “Israel’s founding father.”

The Founding of Israel

In 1933, Hitler came to power in Germany, and in 1935 the Nuremberg Laws made German Jews (and later Austrian and Czech Jews) stateless refugees. Similar rules were applied by the many Nazi allies in Europe. The subsequent growth in Jewish migration and the impact of Nazi propaganda aimed at the Arab world led to the 1936–1939 Arab revolt in Palestine. Britain established the Peel Commission to investigate the situation. The commission did not consider the situation of Jews in Europe, but called for a two-state solution and compulsory transfer of populations. Britain rejected this solution and instead implemented the White Paper of 1939. This planned to end Jewish immigration by 1944 and allow no more than 75,000 additional Jewish migrants. This was disastrous to European Jews, who were already gravely discriminated against and in need of refuge. The British maintained this policy until the end of the Mandate.

During World War II, as the horrors of the Holocaust became known, the Zionist leadership formulated the One Million Plan, a reduction from Ben-Gurion’s previous target of two million immigrants. Following the end of the war, a massive wave of stateless Jews, mainly Holocaust survivors, began migrating to Palestine in small boats in defiance of British rules. The Holocaust united much of the rest of world Jewish community behind the Zionist project. The British either imprisoned these Jews in Cyprus or sent them to the British-controlled Allied Occupation Zones in Germany. The British, having faced the 1936–1939 Arab revolt against mass Jewish immigration into Palestine, were now facing opposition by Zionist groups in Palestine for subsequent restrictions.

On November 29, 1947, the United Nations General Assembly adopted a Partition Plan for Mandatory Palestine. This specified borders for new Arab and Jewish states and an area of Jerusalem to be administered by the UN under an international regime. The end of the British Mandate for Palestine was set for midnight on May 14, 1948, but the Palestinians rejected the plan.

On December 1, 1947, the Arab Higher Committee proclaimed a three-day strike, and Arab gangs began attacking Jewish targets. The Jews were initially on the defensive as civil war broke out, but in early April 1948 moved onto the offensive. The Arab Palestinian economy collapsed and 250,000 Palestinian Arabs fled or were expelled.

On May 14, 1948, the day before the expiration of the British Mandate, David Ben-Gurion, the head of the Jewish Agency, declared “the establishment of a Jewish state in Eretz-Israel, to be known as the State of Israel.” The only reference in the text of the Declaration to the borders of the new state is the use of the term Eretz-Israel (“Land of Israel”). 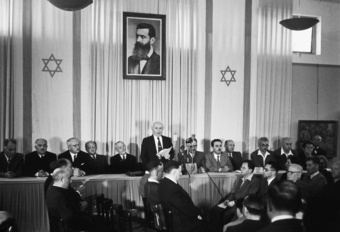 The following day, the armies of four Arab countries—Egypt, Syria, Transjordan, and Iraq—entered what had been British Mandatory Palestine, launching the 1948 Arab–Israeli War. Contingents from Yemen, Morocco, Saudi Arabia and Sudan also joined the war. The purpose of the invasion was to prevent the establishment of the Jewish state at inception, and some Arab leaders talked about driving the Jews into the sea. According to Benny Morris, Jews felt that the invading Arab armies aimed to slaughter the Jews. The Arab League stated that the invasion was to restore law and order and prevent further bloodshed.

After a year of fighting, a ceasefire was declared and temporary borders, known as the Green Line, were established. Jordan annexed what became known as the West Bank, including East Jerusalem, and Egypt took control of the Gaza Strip. The United Nations estimated that more than 700,000 Palestinians were expelled by or fled from advancing Israeli forces during the conflict—what would become known in Arabic as the Nakba (“catastrophe”).

The “Jewish state” is a political term used to describe the nation state of Israel. The state of Israel defined itself in its declaration of independence as a “Jewish state,” a term that appeared in the United Nations partition decision of 1947. The term has been in common usage in the media since the establishment of Israel and is used interchangeably with Israel.

Since its establishment, Israel has passed many laws which reflect on the Jewish identity and values of the majority (about 75% in 2016) of its citizens. However, the secular versus religious debate in Israel in particular has focused debate on the Jewish nature of the state. Another aspect of the debate is the status of minorities in Israel, most notably the Israeli Arab population.

There has been ongoing debate in Israel about whether the state should recognize more Jewish culture, encourage Judaism in schools, and enshrine certain laws of Kashrut and Shabbat observance. This debate reflects a historical divide within Zionism and among the Jewish citizens of Israel, which has large secular and traditional/Orthodox minorities as well as a majority that lies somewhere in between.

Secular Zionism, the historically dominant stream, is rooted in a concept of the Jews as a people with a right to self-determination, and to have a state where they would be unafraid of antisemitic attacks and live in peace.

The notion that Israel should be constituted in the name of and maintain a special relationship with a particular group of people, the Jewish people, has drawn much controversy vis-à-vis minority groups living in Israel – the large number of Muslim and Christian Palestinians residing in Israel and, to the extent that those territories are claimed to be governed as part of Israel and not as areas under military occupation, in the West Bank and Gaza. For example, the Israeli National Anthem, Hatikvah, refers to Jews by name as well as alluding to the concept of Zionism, and contains no mention of Palestinian Arab culture. This anthem therefore excludes non-Jews from its narrative of national identity. Similar criticism has been made of the Israeli flag which resembles the Tallit (a Jewish prayer shawl) and features a Star of David, universally acknowledged as a symbol of Judaism. Critics of Israel as a Jewish state, particularly a nation state, have suggested that it should adopt more inclusive and neutral symbolism.