The Six-Day War, which had its origins in the ongoing tense relations between Israel and its neighboring Arab nations, was a decisive victory for Israel, tripling its territory from before the war.

Describe the events of the Six-Day War

Yom Kippur War
A war fought by a coalition of Arab states led by Egypt and Syria against Israel from October 6 to 25, 1973. The fighting mostly took place in the Sinai and the Golan Heights, territories that had been occupied by Israel since the Six-Day War of 1967. Egyptian President Anwar Sadat wanted also to reopen the Suez Canal. Neither specifically planned to destroy Israel, although the Israeli leaders could not be sure of that.
1948 Arab–Israeli War
A war between the State of Israel and a military coalition of Arab states, forming the second stage of the 1948 Palestine war. The ongoing civil war between the Jews and Arabs in Palestine transformed into an interstate conflict between Israel and the Arab states following the Israeli Declaration of Independence the previous day. A combined invasion by Egypt, Jordan, and Syria, together with expeditionary forces from Iraq, entered Palestine.

The Six-Day War, also known as the June War, 1967 Arab–Israeli War, or Third Arab–Israeli War, was fought between June 5 and 10, 1967, by Israel and the neighboring states of Egypt (known at the time as the United Arab Republic), Jordan, and Syria.

Relations between Israel and its neighbors had never fully normalized following the 1948 Arab–Israeli War. In the period leading up to June 1967, tensions became dangerously heightened. In reaction to the mobilization of Egyptian forces along the Israeli border in the Sinai Peninsula, Israel launched a series of preemptive airstrikes against Egyptian airfields. The Egyptians were caught by surprise, and nearly the entire Egyptian air force was destroyed with few Israeli losses, giving the Israelis air superiority. Simultaneously, the Israelis launched a ground offensive into the Gaza Strip and the Sinai, which again caught the Egyptians by surprise. After some initial resistance, Egyptian leader Gamal Abdel Nasser ordered the evacuation of the Sinai. Israeli forces rushed westward in pursuit of the Egyptians, inflicted heavy losses, and conquered the Sinai.

Nasser induced Syria and Jordan to begin attacks on Israel by using the initially confused situation to claim that Egypt defeated the Israeli air strike. Israeli counterattacks resulted in the seizure of East Jerusalem and the West Bank from the Jordanians, while Israel’s retaliation against Syria resulted in its occupation of the Golan Heights.

On June 11, a ceasefire was signed. Arab casualties were far heavier than those of Israel: fewer than a thousand Israelis were killed compared to over 20,000 from the Arab forces. Israel’s military success was attributed to the element of surprise, an innovative and well-executed battle plan, and the poor quality and leadership of the Arab forces. As a result of the war, Israel gained control of the Gaza Strip and the Sinai Peninsula from Egypt, the West Bank and East Jerusalem from Jordan, and the Golan Heights from Syria. Israeli morale and international prestige were greatly increased by the outcome of the war, and the area under Israeli control tripled. However, the speed and ease of Israel’s victory would lead to a dangerous overconfidence within the ranks of the Israel Defense Forces (IDF), contributing to initial Arab successes in the subsequent 1973 Yom Kippur War. The displacement of civilian populations resulting from the war would have long-term consequences, as 300,000 Palestinians fled the West Bank and about 100,000 Syrians left the Golan to become refugees. Across the Arab world, Jewish minority communities were expelled, with refugees going to Israel or Europe. 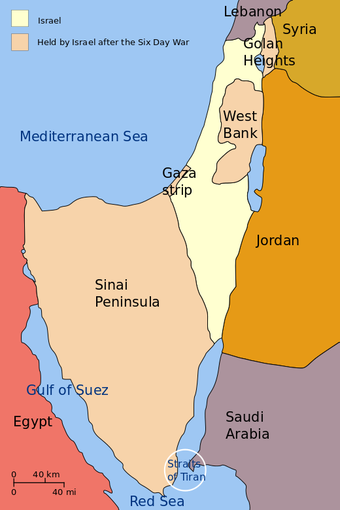 Results of the Six-Day War: Territory held by Israel before and after the Six Day War. Israel gained control of the Gaza Strip and the Sinai Peninsula from Egypt, the West Bank and East Jerusalem from Jordan, and the Golan Heights from Syria.

The origins of the Six-Day War include both longstanding and immediate issues. At this time, the earlier foundation of Israel, the resulting Palestinian refugee issue, and Israel’s participation in the invasion of Egypt during the Suez crisis of 1956 were significant grievances for the Arab world. Arab nationalists, led by Egyptian President Gamal Abdel Nasser, continued to be hostile to Israel’s existence and made grave threats against its Jewish population. By the mid-1960s, relations between Israel and its Arab neighbors had deteriorated to the extent that a number of border clashes had taken place.

In April 1967, Syria shot at an Israeli tractor plowing in the demilitarized zone, which escalated to a prewar aerial clash. In May 1967, following misinformation about Israeli intentions provided by the Soviet Union, Egypt expelled UN peacekeepers who had been stationed in the Sinai Peninsula since the Suez conflict, and announced a blockade of Israel’s access to the Red Sea (international waters) via the Straits of Tiran, which Israel considered an act of war. Tension escalated, with both sides’ armies mobilizing. Less than a month later, Israel launched a surprise strike which began the Six-Day War.

The political importance of the 1967 War was immense; Israel demonstrated that it was able and willing to initiate strategic strikes that could change the regional balance. Egypt and Syria learned tactical lessons and would launch an attack in 1973 in an attempt to reclaim their lost territory.

Following the war, Israel experienced a wave of national euphoria, and the press praised the military’s performance for weeks afterward. New “victory coins” were minted to celebrate. In addition, the world’s interest in Israel grew, and the country’s economy, which had been in crisis before the war, flourished due to an influx of tourists and donations, as well as the extraction of oil from the Sinai’s wells.

In the Arab nations, populations of minority Jews faced persecution and expulsion following the Israeli victory. According to historian and ambassador Michael B. Oren:

Mobs attacked Jewish neighborhoods in Egypt, Yemen, Lebanon, Tunisia, and Morocco, burning synagogues and assaulting residents. A pogrom in Tripoli, Libya, left 18 Jews dead and 25 injured; the survivors were herded into detention centers. Of Egypt’s 4,000 Jews, 800 were arrested, including the chief rabbis of both Cairo and Alexandria, and their property sequestered by the government. The ancient communities of Damascus and Baghdad were placed under house arrest, their leaders imprisoned and fined. A total of 7,000 Jews were expelled, many with merely a satchel.

Following the war, Israel made an offer for peace that included the return of most of the recently captured territories. According to Chaim Herzog:

On June 19, 1967, the National Unity Government [of Israel] voted unanimously to return the Sinai to Egypt and the Golan Heights to Syria in return for peace agreements. The Golans would have to be demilitarized and special arrangement would be negotiated for the Straits of Tiran. The government also resolved to open negotiations with King Hussein of Jordan regarding the Eastern border.

In September, the Khartoum Arab Summit resolved that there would be “no peace, no recognition and no negotiation with Israel.” However, as Avraham Sela notes, the Khartoum conference effectively marked a shift in the perception of the conflict by the Arab states away from one centered on the question of Israel’s legitimacy to one focusing on territories and boundaries.