The European Economic Community blossomed from the desire to further regional integration following the successful establishment of the European Coal and Steel Community.

Describe the transition from the ECSC to the EEC

sovereignty
The full right and power of a governing body to govern itself without interference from outside sources or bodies. In political theory, sovereignty is a substantive term designating supreme authority over some polity. It is a basic principle underlying the dominant Westphalian model of state foundation.
supranationalism
A type of multinational political union in which negotiated power is delegated to an authority by governments of member states.

The European Economic Community (EEC) was a regional organization that aimed to integrate its member states economically. It was created by the Treaty of Rome of 1957. Upon the formation of the European Union (EU) in 1993, the EEC was incorporated and renamed as the European Community (EC). In 2009, the EC’s institutions were absorbed into the EU’s wider framework and the community ceased to exist.

In 1951, the Treaty of Paris was signed, creating the European Coal and Steel Community (ECSC). This was an international community based on supranationalism and international law, designed to facilitate European economic growth and prevent future conflicts by integrating its members. With the aim of furthering regional integration, two additional communities were proposed: a European Defence Community and a European Political Community. While the treaty for the latter was drawn up by the Common Assembly, the ECSC parliamentary chamber, the proposed defense community was rejected by the French Parliament. ECSC President Jean Monnet, a leading figure behind the communities, resigned from the High Authority in protest and began work on alternative communities based on economic integration rather than political integration.

After the Messina Conference in 1955, Paul Henri Spaak was given the task of preparing a report on the idea of a customs union. Together with the Ohlin Report, the so-called Spaak Report would provide the basis for the Treaty of Rome. In 1956, Spaak led the Intergovernmental Conference on the Common Market and Euratom at the Val Duchesse castle. The conference led to the signature on March 25, 1957, of the Treaty of Rome, establishing a European Economic Community.

The resulting communities were the European Economic Community (EEC) and the European Atomic Energy Community (EURATOM, or sometimes EAEC). The EEC created a customs union while EURATOM promoted cooperation in the sphere of nuclear power. One of the first important accomplishments of the EEC was the establishment in 1962 of common price levels for agricultural products. In 1968, internal tariffs between member nations were removed on certain products. The formation of these communities was met with protest due to a fear that state sovereignty would be infringed. Another crisis was triggered in regards to proposals for the financing of the Common Agricultural Policy (CAP), which came into force in 1962. The transitional period whereby decisions were made by unanimity had come to an end, and majority voting in the Council had taken effect. Then-French President Charles de Gaulle’s opposition to supranationalism and fear of the other members challenging the CAP led to an empty-chair policy in which French representatives were withdrawn from the European institutions until the French veto was reinstated. Eventually, the Luxembourg Compromise of January 29, 1966, instituted a gentlemen’s agreement permitting members to use a veto on issues of national interest. 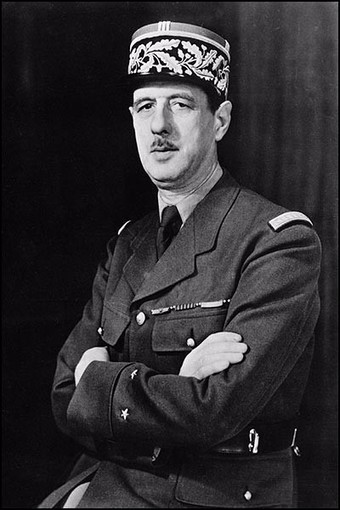 Charles De Gaulle: French President Charles de Gaulle vetoed British membership, held back the development of Parliament’s powers, and was at the centre of the empty-chair crisis of 1965.

On July 1, 1967, the Merger Treaty came into force, combining the institutions of the ECSC and EURATOM into that of the EEC. Collectively, they were known as the European Communities. The Communities still had independent personalities although they were increasingly integrated. Future treaties granted the Community new powers beyond simple economic matters, edging closer to the goal of political integration and a peaceful, united Europe.

The 1960s saw the first attempts at enlargement. In 1961, Denmark, Ireland, Norway, and the United Kingdom applied to join the three Communities. However, President Charles de Gaulle saw British membership as a Trojan horse for U.S .influence and vetoed membership, and the applications of all four countries were suspended. The four countries resubmitted their applications on May 11, 1967, and with Georges Pompidou succeeding Charles de Gaulle as French president in 1969, the veto was lifted. Negotiations began in 1970 under the pro-European government of UK Prime Minister Sir Edward Heath, who had to deal with disagreements relating to the CAP and the UK’s relationship with the Commonwealth of Nations. Nevertheless, two years later the accession treaties were signed and Denmark, Ireland, and the UK joined the Community effective January 1, 1973. The Norwegian people finally rejected membership in a referendum on September 25, 1972. 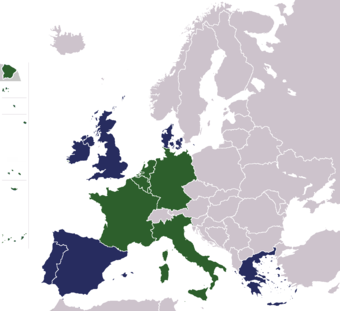 The Treaties of Rome stated that the European Parliament must be directly elected; however, this required the Council to agree on a common voting system first. The Council procrastinated on the issue and the Parliament remained appointed. Charles de Gaulle was particularly active in blocking the development of the Parliament, with it only being granted budgetary powers following his resignation. Parliament pressured for agreement and on September 20, 1976, the Council agreed part of the necessary instruments for election, deferring details on electoral systems that remain varied to this day. In June 1979, during the tenure of President Jenkins, European Parliamentary elections were held. The new Parliament, galvanized by a direct election and new powers, started working full-time and became more active than previous assemblies.

Greece applied to join the Community on June 12, 1975, following the restoration of its democracy. Greece joined the Community effective January 1, 1981. Similarly, and after their own democratic restorations, Spain and Portugal applied to the communities in 1977 and joined together on January 1, 1986. In 1987, Turkey formally applied to join the Community and began the longest application process for any country. With the prospect of further enlargement and a desire to increase areas of cooperation, the Single European Act was signed by foreign ministers in February 1986. This single document dealt with the reform of institutions, extension of powers, foreign policy cooperation, and the single European market. It came into force on July 1, 1987. The act was followed by work on what would become the Maastricht Treaty, which was agreed to on December 10, 1991, signed the following year, and came into force on November 1, 1993, establishing the European Union.