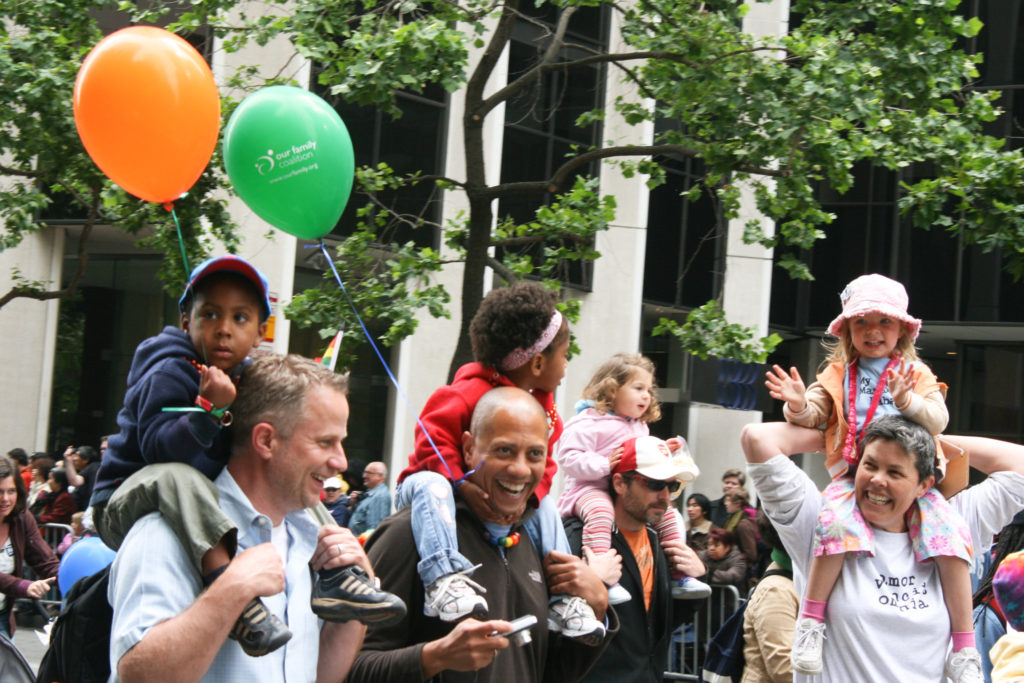 Marchers at San Francisco Pride  2008 with children, holding balloons from the Our Family Coalition.

Although not all families include children, the goal of becoming parents can be an important one for many (Langdridge, Sheeran, & Connolly, 2005). Research has suggested that a wide range of motivations push people to become parents, including: emotional bonding, personal fulfillment, to give and receive love, continuing the family line, not being alone later in life, (Langdridge, Sheeran, & Connolly), because one’s partner wants to become a parent (Miller, 1994), or to feel “complete” (Newton, Hearn, Yuzpe, & Houle, 1992). Lesbian mothers and gay fathers have reported many of the same motivations for becoming parents, but these motivations may be shaped by the unique context of LGBTQ parenthood. For example, Goldberg, Downing, & Moyer (2012), in their study of the parenting motivations of gay fathers, found that some were motivated by the desire to instill tolerance in their children, thereby creating a more tolerant world.

According to Gates (2013), approximately 48% of LGBTQ women and 20% of LGBTQ men under 50 are raising children. Some are doing so as part of couples, and some as single parents. In addition, approximately 3.7 million children in the U.S. have a parent who is LGBTQ, and approximately 200,000 have parents who are part of a same-sex relationship (either couples or single-parents) (Gates, 2015).

How are LGBTQ Families with Children Formed? San Diego Pride 2008, marchers with a child in a stroller and a sign that reads “love makes a family.”

LGBTQ families with children are created in a variety of ways. Some may become parents in the context of heterosexual relationships—perhaps coming out later in life, after becoming parents. Some may be in a relationship with the other sex, but identify as bisexual or non-heterosexual. Others may identify as LGBTQ, be in a same-sex relationship, and become parents through the use of assisted reproductive technologies (ART), surrogacy, adoption, or foster care (Gates, 2015).

Parents Coming Out as LGBTQ

Due to societal pressure and expectations, LGB people of older generations may have entered relationships with the opposite sex in order to avoid admitting their sexual orientation, to avoid stigma and be accepted, or to have children at a time when family-building options for LGB people were unimaginable for most (Davies, 2008). Childrens’ reactions to parents’ coming out as LGB range from disbelief and shock, to blaming the other parent for the LGB person’s “changed” identity, to feelings of acceptance and love (Davies, 2008). Some adult children report feeling closer to their parent now that they know (Davies, 2008) Many of these reactions are mediated by the child’s age and developmental stage at the time of disclosure.

Parents who come out as transgender may face similar experiences to their cisgender LGB counterparts (i.e., challenges disclosing and gaining acceptance from children, ex- and current partners, and extended family members); however, a number of things may be different (Lambda Legal, 2019). First, the age of the child may influence the reaction of the child to the disclosure. The younger the child is, the more flexible their thinking and the easier they adapt to the news. Second, finding support from those who have a similar experience coming out as transgender to their children may be difficult. This can underscore the need for a transgender parent to receive support from other transgender parents in similar circumstances. Third, many transgender parents report that their relationships with their child or children were “the same or better” after disclosing their identity than they were prior to disclosure.

Gay and lesbian step-families may also have distinct needs and challenges from both straight families and gay and lesbian families that have children within the context of a same-sex relationship (Murray, 2000). In addition to the challenges of forming a step-family, gay and lesbian individuals often have to negotiate if, how, and who to come out to as well as assessing the impact of coming out on both the individual and family unit. Co-parenting with a different-sex ex-spouse or partner can range from supportive to antagonistic, and can acknowledge or ignore the person’s new same-sex partner or spouse 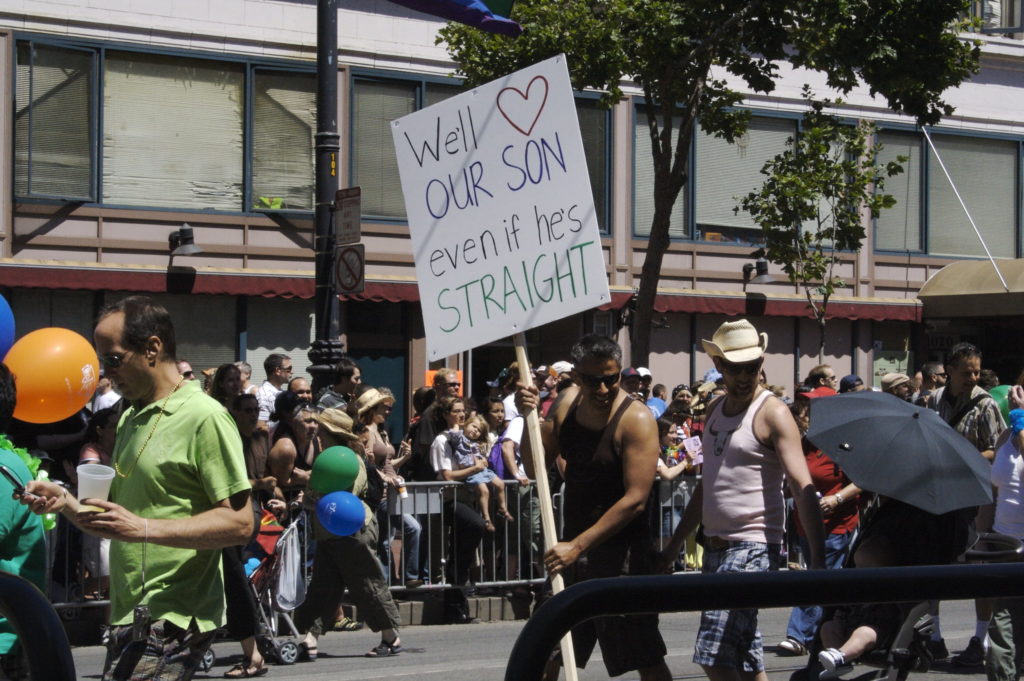 Pride marchers with sign that reads “we’ll <3 our son even if he’s straight.”

Myths About same-Sex Parenting and the Children in LGBTQ Families

A variety of myths have been associated with same-sex parenting and the experiences of children raised by same-sex parents. These myths have negatively influenced the decisions of and interactions with legal and social services professionals (Patterson & Redding, 1996), and include concerns that: children raised by same-sex parents or in LGBT households will experience “disruptions” in their gender identity development or in their gender role behaviors; they will become gay or lesbian themselves; they will have more mental health and behavioral problems; they will experience problems in their social relationships and experience more stigmatization, teasing, and bullying; and that they are more likely to be sexually abused by their parents or parent’s friends. Research has soundly refuted all of these myths.

Refuting the Myths: What Does the Research Say?

Psychologist Charlotte Patterson conducted some of most cited research challenging the range of negative myths associated with same-sex parenting (Patterson & Wainright, 2011; Patterson, 1994; 1992 ). Her research has explored the behavioral adjustment, self-concepts, and sex role behaviors of children raised in same-sex households, concluding that “More than two decades of research has failed to reveal important differences in the adjustment or development of children or adolescents reared by same-sex couples compared to those reared by other-sex couples” (p. 241), pointing out that the quality of family relationships is the most important predictor of healthy child development. A review exploring the implications/fitness of same-sex parenting for children, found that across 23 studies, seven of the most common myths related to impaired emotional functioning, greater likelihood of a “homosexual” sexual orientation, greater stigmatization by peers, non-conforming gender role behavior and identity, poor behavioral adjustment, and impaired cognitive functioning, children raised by lesbian moms and gay dads were no more likely to experience negative outcomes than children raised by heterosexual parents (Anderssen, Amlie, & Ytteroy, 2002). 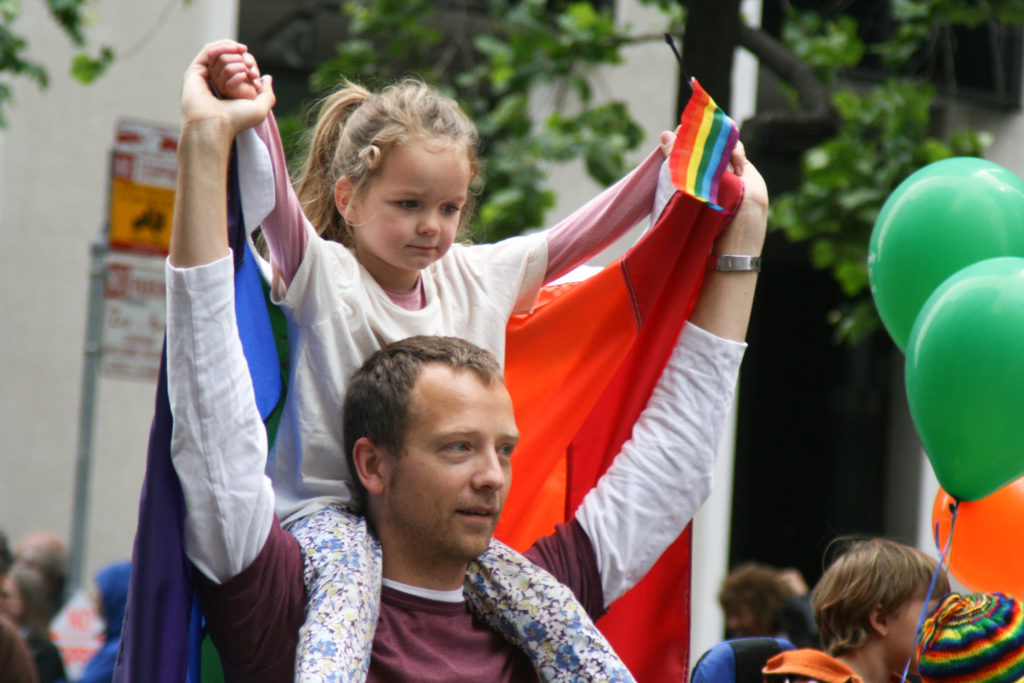 The myths and the research refuting them have found their way into the family courts. Prejudicial attitudes and stereotypes describing unfit lesbian moms and gay dads have been used in custody cases to justify a variety of punitive court decisions. Testimony in opposition to same-sex parenting has pointed out the potential harm that may result from placement with a prospective LGBTQ adoptive or foster parent, the questionable morals of LGBTQ parents, in some states that LGBTQ relationships were illegal due to (now overturned) sodomy laws, pointing out the lack of legal recognition of same-sex relationships, and sometimes the more subtle statements suggesting that a heterosexual household is simply in the best interest of the child (Patterson & Redding, 1996). However, research refuting these myths and establishing the fitness of LGBTQ parents has been influential in custody cases (Patterson, 2009), and Patterson herself has served as an expert witness in numerous custody and other court cases (https://www.apa.org/members/content/patterson-lgbtq-research).