What is a Family? 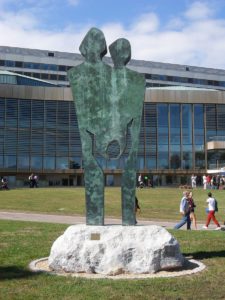 Family, a bronze statue in the garden of the Palace of Nations in Geneva, Switzerland. It is a representation of two parents and a baby.

For some, family refers specifically to a social unit, most often a man and a woman, who live together, share resources, and are raising children (or plan to reproduce and raise children) (Lexico.com, n.d.). However, the term “family” actually describes a wide variety of social organizations. Family can refer to groups of people organized by kinship and biology, with designations like “parents”, “siblings”, “cousins”, “aunts/uncles”, etc. (Steele et al., 2012); as well as those regardless of kinship, who live together, share resources, or care for each other (Edwards et al., 2009). “Nuclear family”, “single-parent family”, “extended family”, “family of choice”, and “blended family” are terms used to describe different types of families. Indeed, the effort to understand the meaning and function of “family” is a central goal of many of the social sciences.

Families serve a variety of functions, including: reproducing and providing for children, regulating sexuality and gender by communicating and reinforcing social norms,, and transmitting cultural knowledge to name a few. However, the particular functions and purpose of family also varies across cultures and can change over time. For example, the Western notion of family changed significantly as populations moved from farm- and household-based economies to industrial capitalism, and into cities. Where the former relied on the family organization and procreation to, among other things, create the labor necessary for maintenance of land, production of necessary goods, and ultimately the survival of its collective members; in the urbanization of industrial capitalism, “family” came to refer to a more affective or intimate relational unit that can also serve as a source of individual happiness (D’Emilio, 1998).

Like heterosexual relationships, same-sex relationships take place within the culturally defined social norms that organize sexuality and pair bonding in a society in a particular historical context. However, modern same-sex relationships exist within a heteronormative context that privileges heterosexual relationships, organizes gender role expectations in a way that reinforces those expectations, and marginalizes non-heterosexual desire, love, and pair bonding. Additionally, heteronormativity also reinforces the ideal (if not practice) of sexual and romantic monogamy, links family authenticity with the presence of children, implies the need to adhere to patriarchal ideals of division of domestic labor, sex roles, and often even the vows and covenants made between partners.

What are LGBTQ Families? 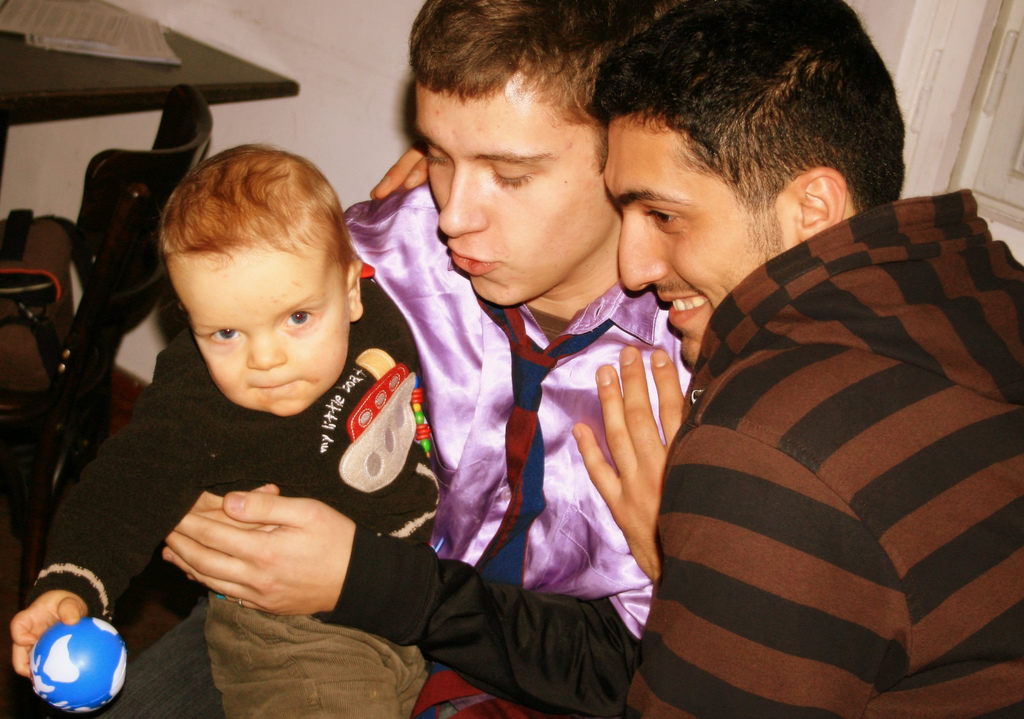 A same sex couple with their child.

These contested definitions of family have, and continue to, influence understanding of LGBTQ familiies, varying considerably across time and cultural context (Becker & Todd, 2013). Powell, Bolzendahl, Geist, and Steelman (2010) found that definitions of family for people in the U.S. ranged from inclusionary, defining family quite broadly, as “same-sex and hetero- sexual couples with or without children, regardless of marital status”; moderate, defining family as “all households with children, including same-sex households”, and exclusionary, defining family as a “heterosexual married couple with children”. Other important aspects of family are the functional characteristics it serves (Powell et al.), such as relationship quality, commitment, care, love, or in the case of inclusionists, “whatever it means to them” (Hull & Ortyl, 2019, p. 33).

Research has also explored the boundaries of family, proposing the idea of “fictive” [sic] (Nelson, 2014; Collins, 2000) and “voluntary” kin (Braithwaite et al., 2010), as well as “chosen families” (Weston, 1991), “non-blood related friends who [exist] somewhere between the realm of friends and kin…perform a surrogate role, often filling in for family members who are missing due to distance, abandonment or death” (Dewaele, Cox, Van den Berghe & Vincke, 2011, p. 259). It has been suggested that chosen families are more common among marginalized groups (Nelson, 2014; Braithwaite et al., 2010); however, use of the term “chosen family” may vary by class and race, with white, middle class LGBTQ people being more likely to use the term, whilelower-income LGBTQ people of color being less to use it, but also less likely to use exclusionary definitions of family in general (Stein, 2013).

Family support, sometimes called family acceptance, is an important psychological resource that can influence an individual’s well-being in a number of ways (Thomas, Liu, & Umberson, 2017). It improves one’s sense of self-worth, increasing optimism and positive affect (Symister & Friend, 2003). Unfortunately, supportive and nurturing concepts of family aren’t the reality for all LGBTQ people. Most families exist within a social context defined by heterosexismand anti-LGBTQ prejudice (see Chapter ##). Some families are able to resist heterosexism and embrace LGBTQ family members while some, although initially challenged by the idea that a family member is LGBTQ, are able to resist or overcome their prejudices and accept those LGBTQ members. For others, however, heterosexism and anti-LGBTQ prejudice are too prenicious and may manifest as hostility, rejection, and even violence.

Family stressors. Rejection by family members of one’s sexual orientation, gender identity, and/or gender expression can affect the health and wellness of LGBTQ-identified people. According to Dr. Caitlyn Ryan at the Family Acceptance Project, this rejection can include violence like “hitting, slapping, or physically hurting the youth because of his or her LGBT identity,” “excluding LGBT youth from family events and family activities,” and “pressuring the youth to be more (or less) masculine or feminine” (Ryan, 2009). , Individuals within families that reject their sexual orientation, gender identity, and/or gender expression have an 8.5 times higher rate of suicide across the lifespan, rates of depression, and risk of HIV infection (Ryan et al., 2015).

To increase wellness of LGBTQ people in the context of their families, focus is on increasing accepting behaviors, decreasing rejecting behaviors, and assisting family members of LGBTQ people to understand the root causes of their reactions to their queer children. Accepting behaviors include “support[ing] youth’s LGBT identity even though you may feel uncomfortable,” “connect[ing] youth with an LGBT adult role model,” and “work[ing] to make your religious congregation supporting of LGBT members or find[ing] a faith community that welcomes your family and LGBT child” (Ryan, 2009). Although much of this research has focused on the role of parents in demonstrating acceptance, less is known about the role of siblings, grandparents, and other extended families. Promising research is showing the importance of siblings (see Allen & Roberto, 2016) and grandparents (see Sherrer, 2016) in the lives of LGBTQ people across the lifespan. 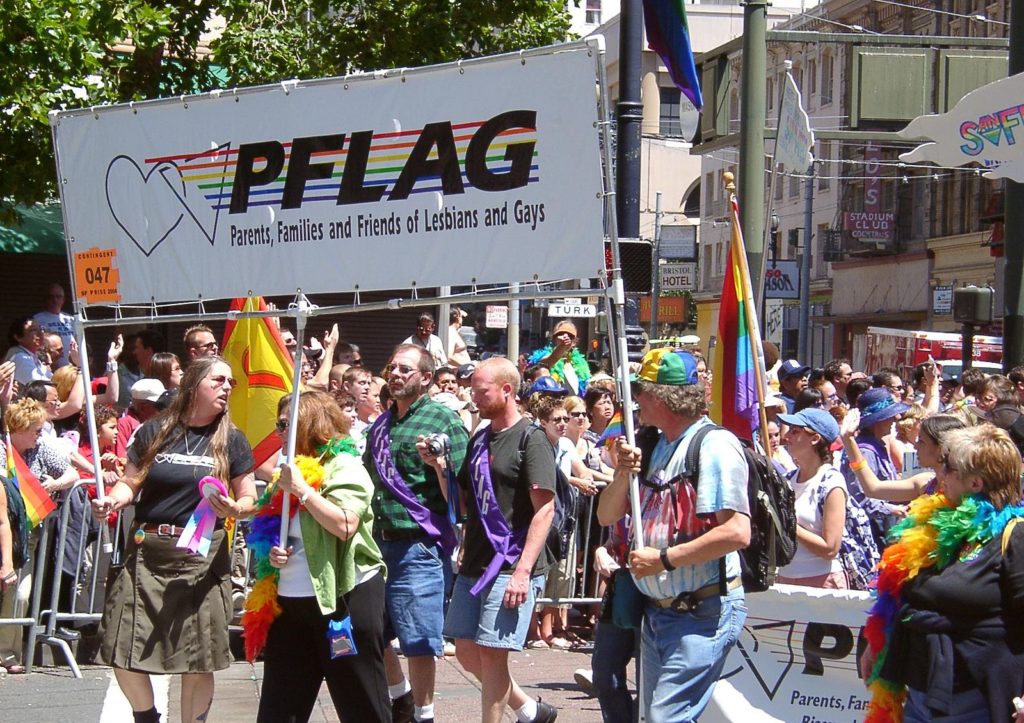 Some families with LGBTQ family members experience feelings of loss, grief, and shame among others (PFLAG, 2019). Loss and grief may be about feeling that they have to give up more heteronormative ideals of marriage and/or grandchildren for their child. Shame may be related to either latent or blatant anti-LGBTQ bias and the fear of being judged by others for having an LGBTQ family member. Connection to outside resources may be an important place to process their feelings separate from their family members. An important organization supporting the experiences of families with LGBTQ family members is PFLAG (formerly known as “Parents, Families, and Friends of Lesbians and Gays”). PFLAG was started in the United States in 1972 as a way for “a mother to publicly support her gay son” and has expanded to over 200,000 members in 400 locations (PFLAG website). Using a three-pronged approach of advocacy, education, and support, PFLAG convenes chapters across the United States that function largely as support groups for families and friends to process their feelings and to shift to becoming advocates for their loved ones.

There are a number of challenges facing researchers who are interested in better understanding LGBTQ families and relationships, including: identifying those who are in same-sex relationships or couples, recruiting adequate recruiting adequate samples, and adequately represent racial, gender, & sexuality diversity within the population (Umberson et al., 2015). Because LGBTQ people continue to face discrimination from their birth families, places of employment, and communities, not to mention ongoing threats from social and legal institutions, some may be hesitant to reveal their identities or relationships (legal challenges faced by same-sex couples are discussed in chapter 6). Because same-sex marriage has only been legal in the U.S. since 2015 (SOTUS, Obergefell v. Hodges, 2015), and the various means of relationship formation have been actively shifting (Peplau, Fingerhut, 2007), records available to researchers are limited or incomplete.

Also, agreat deal of LGBTQ affirmative research relies on exclusionary “heteronormative” definitions of family that limit the operationalization of LGBTQ family to those who conform to a traditional heterosexual model, or suggest that ideal LGBTQ families are those that attempt to conform to those exclusionary models. These definitions may result in the additional marginalization of families that fail to conform to these definitions (i.e., chosen families, families without children, non-monogamous or polyamorous families). In addition, LGBTQ affirmative research often focuses on majority families, neglecting queer families that include other identities such as race, ethnicity, class, and ability (Crenshaw, 1989).