Transgender Studies is an interdisciplinary field of knowledge production that, like queer theory, challenges discursive and institutional regimes of normativity. However, while queer theory is sometimes guilty of the “privileging of homosexual ways of differing from heterosexual norms,” Transgender Studies challenges naturalized links between the material body, psychic structures, and gendered social roles (Stryker 2006, 7).

Like queer activism and theory, Transgender Studies emerged in activist and academic circles around the same time. Anthropologist David Valentine attributes the term’s early emergence to activist communities in the US as well as the UK (2007, 33). He notes that “it was seen as a way of organizing a politics of gender variance that differentiated it from homosexuality” (2007, 33).

Read the blog post “Trans Visibility Does Not Equal Liberation” by Kai Cheng Tom about the difference between representation and progress.

Susan Stryker provides an even more specific periodization, noting that the term “transgender” emerged in the 1980s, but didn’t take on its current meaning until 1992 when Leslie Feinberg published Transgender Liberation: A Movement Whose Time has Come (2006, 4).  At this point transgender began to be used broadly to refer to “discomfort with role expectations, being queer, occasional or more frequent cross-dressing, permanent cross-dressing and cross-gender living, through to accessing major health interventions such as hormonal therapy and surgical reassignment procedures” (Whittle 2006, xi). Prior to the 1990s, the term transgender was used to refer specifically to persons who socially transitioned to a gender other than the one they were assigned at birth without using hormones of surgery to change their body. 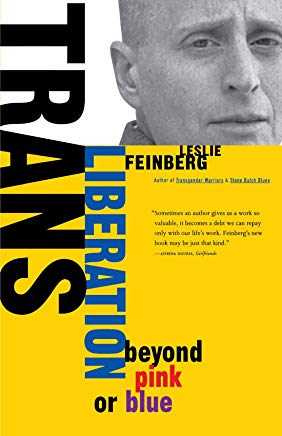 By refusing the idea that there is a “right” way to be transgender and encouraging coalition building under the newly flexible term transgender, Feinberg hoped transgender persons could build a transformative activism-oriented community (Feinberg 2006).

Feinberg’s 1993 publication, Stone Butch Blues, is a fictional account of negotiating New York City as a butch lesbian in the 1970s. Feinberg experienced harassment and brutality at the hands of police and the vivid descriptions of violence represented in the book illustrate the consequences of not embodying a socially sanctioned gender expression. Work like this and that published by other trans scholars demonstrates the importance of thinking gender and sexuality queerly.

Another example is Kate Bornstein whose 1994 publication, Gender Outlaw: On Men, Women, and the Rest of Us, humorously and accessibly describes through her experiences with gender and sexuality. Bornstein shares, “I identify as neither male nor female, and now that my lover is going through his gender change, it turns out I’m neither straight nor gay” (1995, 4). She matter-of-factly expresses her feelings of shame at not fitting into normative gender identities, and a corresponding sense of relief with intellectual work coming out in the 1990s that made it possible to understand gender as a social construct (1995, 12).