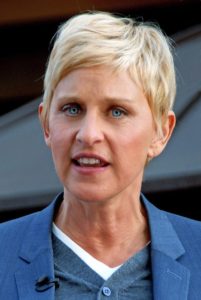 Actress, comedian, and talk show host Ellen DeGeneres is now an internationally recognizable figure who regularly appears on Forbes’ annual “World’s 100 Most Powerful Women” Lists, but her success required the resuscitation of a career that went virtually comatose from 1997-2003. DeGeneres came out publicly as a lesbian on her sitcom, Ellen (1994-1998), in 1997. The show returned for one more season but was subsequently canceled. Many speculate that the final season’s poor ratings owed to network ABC’s refusal to risk alienating conservative audiences by promoting it.

Thanks largely to Ellen’s milestone pronouncement, late 1990s and early 2000s television saw a spate of LGBTQ characters, personalities, and plotlines. Long-running NBC sitcom Will & Grace premiered in 1998, ended in 2006, and rebooted in 2017. It features a gay male lead as well as a prominent gay supporting character. While the show was groundbreaking and put (some) gay issues on a national stage, its characters played into many stereotypes and offered an almost exclusively white, cisgender, and normative representation of homosexuality.

Becker (1998) contextualizes the 1990s’ spike in LGBTQ+ (mostly “G” and “L”) programming in terms of increasingly segmented markets. The representation of certain “safe” forms of non-heterosexuality appealed to straight audiences among growing discourses of liberal tolerance. As commercial productions, the existence—or at least distribution—of film and TV shows is always to some extent a business decision. Media studios and companies are unlikely to take a chance on something they don’t believe will prove profitable. The 1990s marked a point at which many companies began to view sexual identity groups and queer-friendly audiences as viable marketing demographics—a trend that continues in forms such as corporate Pride sponsorships, mass-market rainbow merchandise, and “lifestyle” networks such as LOGOtv and Here TV. 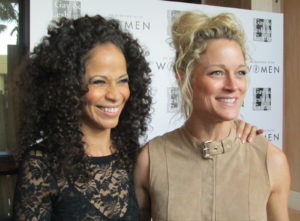 Showtime’s Queer as Folk (2000-2005) made a splash in 2000, a groundbreaking Americanization of a British series that had premiered the year before. The show, shot chiefly in Toronto, Canada, followed a group of friends and lovers through their lives in Pittsburgh, Pennsylvania. While predominantly white, middle-class, and cismale, Queer as Folk was pioneering in terms of promoting safe sex and portraying healthful, happy characters living with HIV. The show also thematized prominent issues often associated with gay male communities, for better or for worse, such as polyamory, body dysmorphia, drug and alcohol use, and homophobic discrimination in the workplace and beyond. Considered by many the “female version” of Queer as Folk, The L Word (2004-2009) premiered on Showtime in 2004. It achieved slightly greater diversity than its predecessor, featuring several characters of color, interracial relationships, a trans character, and a deaf character.

With a racially diverse cast, ABC’s The Fosters (2013-) has established long-term success among a mainstream audience for which shows such as Glee (2009-2015) and Modern Family (2009-) helped pave the way. The Fosters explores an array of LGBTQ-specific issues, such as transitioning and bullying, as well as more universal themes related to relationships, family, and the challenges of puberty. More recently, the animated series Bojack Horseman (2014-) broke ground with its portrayal of asexual Todd Chavez, including his coming out and navigation of ace relationships. 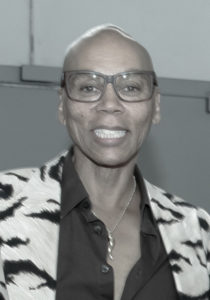 A major contemporary queer icon, RuPaul Charles gained fame in the early 1990s as a drag performer, actor, supermodel, musician, and all-around entertainer. He has appeared in iconic LGBTQ films including Jamie Babbitt’s But I’m a Cheerleader (1999) and Beeban Kidron’s To Wong Foo, Thanks for Everything, Julie Newmar (1995). RuPaul also produces, hosts, and judges the hit reality series RuPaul’s Drag Race, in which he mentors competitors pursuing a cash prize and the coveted title of “America’s Next Drag Superstar.” While massively popular, the show’s use of offensive terms and RuPaul’s suggestion—for which he later apologized—that trans contestants possessed an unfair advantage over cis contestants have drawn criticism.

Some lament the fall of the brick-and-mortar video rental store with the rise of digital video services, but the latter has proven a boon to LGBTQ+ film and television and many consumers thereof. The impersonality—not to say anonymity—of these platforms removed the stigma, perceived or real, that might prevent interested audiences from renting or purchasing queer movies in person. These new delivery options (and later streaming, a service Netflix began offering in 2007) opened veritable floodgates of viewership, especially in conservative cities, rural areas, and other environs where queer media difficult to come by. Digital platforms such as Prime Video, Hulu, Hoopla, and Kanopy have further extended the reach of mainstream, indie, and international film, often at little or no direct cost to viewers. 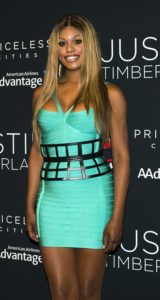 Retail giant Amazon broke ground with Jill Soloway’s Transparent (2014-) the first show produced through Amazon Studios and aired on its streaming platform, Prime Video. Transparent follows Maura, newly out, and her family through their lives in Los Angeles. Cis actor Jeffrey Tambor won a Golden Globe for his performance in a show that presents many challenges trans populations face in society, including bathroom policing, transphobic violence, and trans-exclusionary versions of so-called feminism.

Breaking through in Jenji Kohan’s Netflix series Orange is the New Black (2013-), which explores the experiences of a diverse group of women in prison, Laverne Cox has emerged among the most prominent trans performers in the world. Her role as Sophia Bursett sheds light on the particular barriers and forms of dehumanization that trans individuals face in prison, as—in addition to transphobic harassment from guards and inmates alike—their access to medically necessary materials may be curtailed.

Also on Netflix, Lena Waithe co-wrote and starred in an episode of Aziz Ansari’s comedy series, Master of None (2015-). The episode, which depicts the seldom-represented experience of a Black lesbian coming out to her family, won a Primetime Emmy for Outstanding Writing for a Comedy Series.

Streaming video has also benefited comedians, providing ready access to audiences who live far from—or can’t afford—urban-centric standup circuits. The vibrancy of queer women in comedy has been a revelation for many in recent years. In addition to performers with established reputations (Rosie O’Donnell, Ellen DeGeneres, Wanda Sykes, and Margaret Cho), a new set has taken viewers by storm, thanks largely to streaming platforms. As with film and television, some LGBTQ comedy content expressly addresses aspects of queer identity, e.g. Cameron Esposito’s viral clip about her so-called “lesbian side mullet.” Some, such as Hannah Gadsby’s Netflix special Nanette (2018), upends the genre, critiquing misogyny and homophobia and the bound-up ways both structure the art world, comedy, and everyday life.

Hannah Gadsby’s TedTalk in the wake of her groundbreaking Netflix comedy special Nanette:

Tig Notaro became famous for her standup in the mid-2010s, including a filmed set in which she lifts her shirt to reveal a chest that has undergone, as part of her breast cancer treatment, a double mastectomy. She would later write, produce, and star in One Mississippi (2015-2017), an autobiographical comedy that aired on Amazon Prime and co-starred Notaro’s real-life spouse, writer and actor Stephanie Allynne. 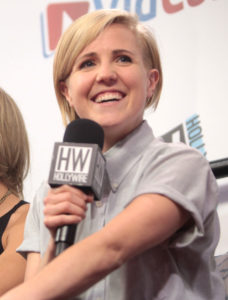 Since the proliferation of cable options in the 1990s, the screen media market has fragmented further with the advent of the Internet and the means to reach millions instantly with relatively little overhead, experience, or equipment. In 2011, lesbian Hannah Hart broke out with My Drunk Kitchen, a YouTube comedy series whose short films parody cooking show conventions and feature Hart’s inebriated culinary ventures. Around the same time, Jazz Jennings became perhaps youngest out trans individual to achieve national prominence in the US. She began making media appearances at age 6 and later created the YouTube series “I Am Jazz.” TLC and the Oprah Winfrey Network have produced, respectively, a reality series and a documentary about Jazz.

Multitalented queer figures such as Jes Tom (Soojung Dreams of Fiji), Fortune Feimster (Chelsea), Sampson McCormick (A Tough Act to Follow), and others have gained massive followings through a combination of recorded and live performances as well as social media presence. Indeed, social media platforms such as Facebook, Instagram, and Twitter have created unprecedented reach and a sense of “connectedness”—for better or worse—for celebrities and the public. YouTube has also become a popular medium for coming out via emotionally impactful videos that sometimes accrue millions of views.

Youtuber Eugene Lee Yang, best known for his work at Buzzfeed and with the Try Guys, comes out in a music video he directed himself expressing artistically his experience as a gay Asian man. The video has garnered 14 million views.